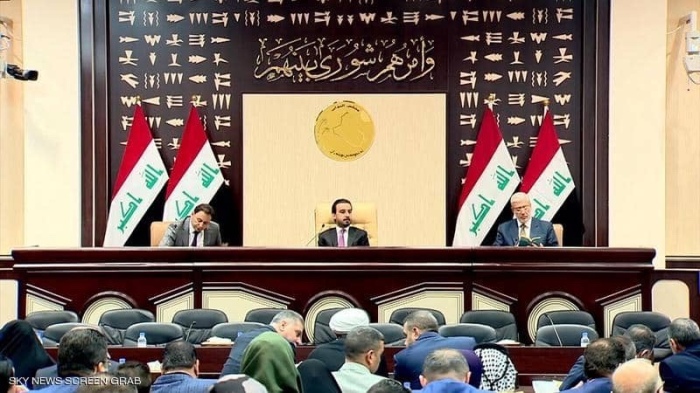 The House of Representatives has raised its regular session to next Thursday.

The House of Representatives opened its regular session today, Tuesday, headed by Parliament Speaker Muhammad al-Halbousi, with the presence of 198 deputies. 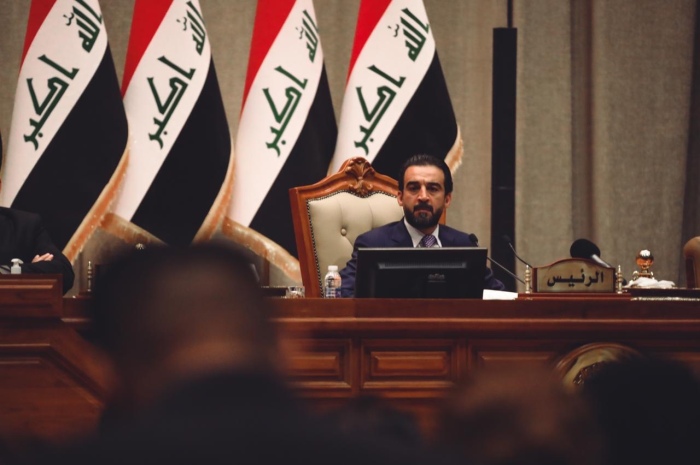 Shafaq News / The Iraqi Council of Representatives (Parliament) failed, on Tuesday, to pass a draft Federal Court bill due to the ongoing disputes over three articles.

A representative source told Shafaq News, “The meeting of the parliament presidency with heads of political blocs failed to reach an agreement on resolving the disputed articles in the Federal Court law.”

He pointed out that “the Presidency of Parliament agreed with the political forces to postpone the vote on the Federal Supreme Court Law until Thursday to give an opportunity to reach a final agreement on passing the law and resolving disputes over its paragraphs.”

He added that “the session witnessed a boycott by MPs from different political blocs and parliamentary blocs.”

During the last period, Parliament voted to pass 21 articles of the Federal Court bill, and disputes revolve around three pending articles.

The differences focus on granting seats to Islamic law scholars of the Shiite and Sunni sects, seats in the Federal Court, and giving them the power to vote on decisions.

Disputes also revolve around the voting mechanism in the Federal Court as to whether unanimity is required to pass decisions or a simple majority.

SULAIMANI — British Consul-General in Erbil James Thornton said on Tuesday (March 16) that the UK and other foreign governments hope that Erbil and Baghdad are able to resolve their disagreements, including over the budget, oil, and payments to public sector workers.

During a visit to Halabja to participate in the 33rd annual commemoration of the chemical attack on the city, Thornton told reporters that the consulate has always stressed the importance of resolving issues between the two governments.

The KRG and the federal government have been involved in tense negotiations over the budget for nearly a year, several times announcing the outlines of an agreement only to have politicians pull back from actually moving forward with implementation.

The Kurdistan Regional Government (KRG) Spokesperson Jotiar Adil said that a KRG delegation will visit Baghdad on Tuesday for talks on the budget. 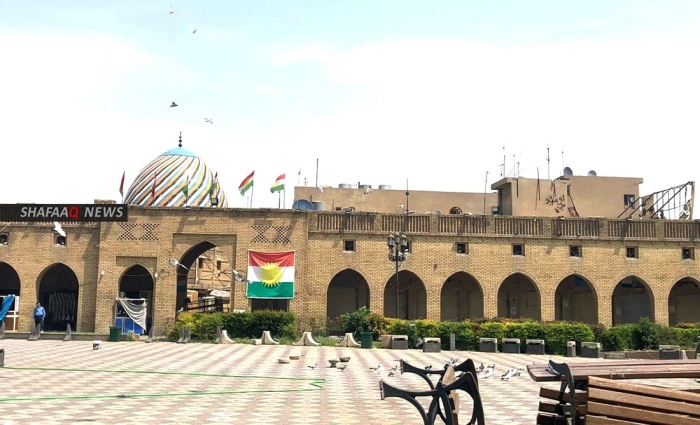 Shafaq News / The Kurdistan Regional Government announced on Tuesday the suspension of official working hours in government departments and institutions for a period of five days from next week on the occasion of Nowruz holidays.

Government spokesman Jotiar Adel said in a statement received by Shafaq News that it was decided to suspend work hours on the occasion of Nowruz holidays, from 21 to 25 of this March.

Committee member Magda Al-Tamimi said, “The Kurdistan region gave us data on the salaries of institutions without the number of employees,” indicating that “the Kurdistan region says that it has received 92 trillion dinars out of 177 since 2005. ”

And she continued, “We do not want to pass the budget by majority, but by mutual consent between all parties,” indicating that “there must be a settlement between Baghdad and Erbil to see the student and the wanted since 2012.”

{Baghdad: Al Furat News} The Central Bank of Iraq revealed that its total foreign currency reserves amount to approximately 56 billion dollars, stressing that it maintains the stability of exchange rates in the markets through the use of its various monetary tools.

Al-Mukhtasar al-Mufid .. In important news, you can find it on the Al Furat News channel on the Telegram .. To subscribe, click here

An official source at the Central Bank of Iraq said in a press interview, that “foreign reserves are still within the limits of sufficiency,” and that “total foreign reserves decreased by approximately 20% during the year 2020.”

He pointed out that “gold holdings are approximately $ 5,703 million, and there are no plans to increase investment in gold in light of the continuing impact of the crisis,” explaining that “the Chinese yuan currency is one of the currencies invested in foreign reserves.”

The source stated, “The Central Bank of Iraq maintains the stability of exchange rates in the markets by exploiting its various monetary tools, the most important of which is the foreign currency sale window that aims to finance imports of goods and services, in accordance with the provisions of the Iraqi Central Bank Law No. 56 of 2004 in Article 28 / b (simple, unconditional buying and selling of foreign currency), in a manner that maintains acceptable rates of inflation. ”

The source attributed the reason for the decline in the price of the dollar in the markets, especially last month, from the price specified in the bank, by saying: “The exchange rate of the US dollar in the local markets retreated from the approved official selling price after the price change by the bank at the end of December of the year. 2020, due to the fact that the change in the exchange rate initially formed a shock to the local market, which required an adjustment period to work out the settlements that took place between each of the merchants (wholesale, retail, and singular) and the settlements of wholesalers with banks, as imports decreased to severe levels, and thus a decrease Demand for foreign currency. ” 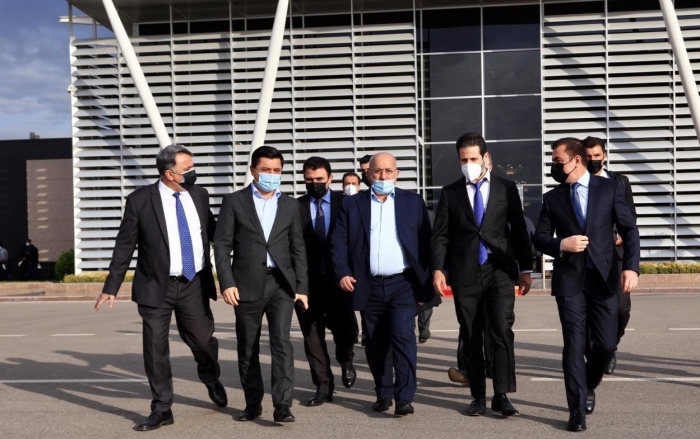 The Kurdistan Regional Government announced, on Tuesday, that the Kurdish negotiating delegation will arrive today in the capital, Baghdad, to resume discussions about the region’s share in the fiscal budget for the year 2021.

The spokesman for the regional government, Jotiar Adel, said in a press statement in Erbil, which was attended by correspondent / Mawazine. News / “The regional government delegation will visit Baghdad today, to complete the discussions with the other parties on the budget.”

Adel added, “We hope to reach an agreement and to ratify the draft budget law.”

Baghdad and Erbil reached an agreement on the financial budget last December, stipulating that the region hand over 250 thousand barrels of oil per day, and half of the revenues from border crossings and others to the federal government, in exchange for a share in the budget of 12.6%. Ended 29 / p4

The Central Bank of Iraq

Shafaq News / The Central Bank announced on Tuesday supervising the work of the Agricultural Bank, indicating that this comes in order to promote the government banking sector.

The bank said in a statement received by Shafaq News that within “the framework of the banking reform program that the Central Bank of Iraq has begun implementing, and in order to advance the state of the government banking sector, it has decided to initiate a number of evaluation measures in government banks, and in this context, direct supervision will take place” with full supervision of the bank’s work. Cooperative agricultural “.

The bank added, and supervision will include the rehabilitation and evaluation plan for all bank operations, in line with its desired role in economic development.

Shafaq News / The Kurdistan Regional Government announced that the federal government negotiator delegation will return today, Tuesday, to the Iraqi capital, Baghdad, to resume discussions about the region’s share in the financial budget for 2021.

Government spokesman Jotiar Adel said in a statement made to reporters in Erbil, including the correspondent of Shafaq News Agency, “Today, a regional government delegation will visit Baghdad to complete discussions with other parties on the budget.”

And he added, “We hope to reach an agreement and the draft budget law will be approved.”

Last December, Baghdad and Erbil reached an agreement on the financial budget, providing for the region to deliver 250,000 barrels of oil per day, and half of the border crossings and other revenues to the federal government, in exchange for a share in the budget of 12.6%.