Skip to content
HomeBaghdad takes 8 decisions, including the creation of the “High Reform Commission” 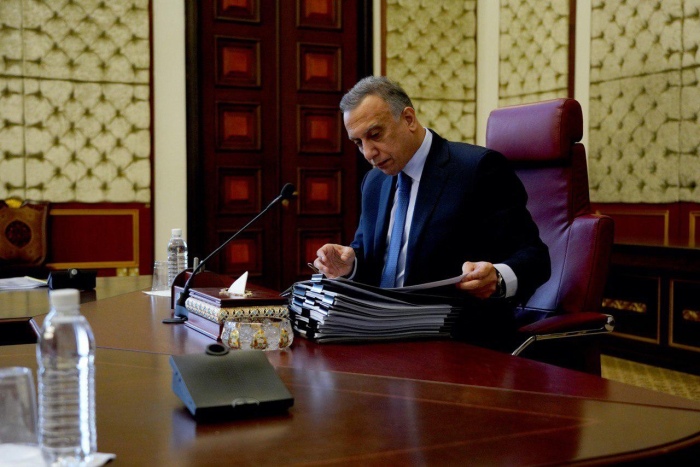 Shafaq News / On Tuesday, the Iraqi Council of Ministers held its regular session headed by Mustafa Al-Kazemi, during which a number of topics included in its agenda were discussed and discussed, and 8 new decisions were taken, including the creation of the “Supreme Committee for Reform.”

The Cabinet reviewed the developments of the Corona pandemic, at the local and international levels, the epidemiological curve indicators in Iraq, the virus statistics, and the precautionary and preventive measures that have been taken to preserve the health of citizens and emphasize the importance of continuing to adhere to them, and preserving the gains made in addressing the Corona pandemic, according to what It was stated in a statement by Al-Kazemi’s office, which was received by Shafaq News.

The Minister of Health and Environment gave a presentation on the developments of the work of the Committee to Promote Governmental Measures in the areas of prevention and control of health and awareness regarding limiting the spread of Coronavirus, and the Ministry of Health’s preparations to confront the increase in infections.

After the Council of Ministers discussed what was included in its agenda, it issued the following decisions:

First: Approval of the inclusion of the third loan in the (FCC) draft of the Basra Refinery in the amount of (30,000,000) dollars, only three hundred million dollars, in the draft Federal Budget Law of the Republic of Iraq for the fiscal year 2021 based on the requirements for granting loans agreed with the (JICA) organization The Japanese Ministry of Finance and Planning can take the necessary measures to ensure that the project can proceed without delay, as it is one of the pioneering and important projects for converting heavy waste, which represents (40-50)% of crude oil, into high-value products such as: high-octane gasoline, light hydrogenated gas oil and fuel oil. With international environmental friendly specifications.

Second: Endorsing the recommendation of the Ministerial Council for Energy (70 for the year 2020) according to the following:

1- Amending the Ministerial Council for Energy Resolution (6 of 2020) to become as follows:

Approval of the extension of contracts for the transportation of petroleum products to electrical stations concluded by the Ministry of Oil to private companies, according to the contract appendix, for a period of (60) days, starting from 1/1/2021, for the purpose of completing all the requirements necessary to start implementing the new contracts, according to what was mentioned in Book of the Ministry of Oil No. 27556 dated 11/23/2020.

2- Signing of contracts above and managing them from the Oil Products Distribution Company / Ministry of Oil.

１. The amount of wages incurred by charitable and free schools exclusively for renewing the foundation license shall be written off.

２. The Ministry of Education shall complete the instructions for the amount of wages to be collected for granting and renewing the foundation license, in coordination between it and the State Council, as soon as possible, with the addition of a text in it that exempts the founding bodies of charitable schools from registration fees and renewal of the license.

Fourth / The Council of Ministers decided the following:

a. Forming a committee called (the Supreme Committee for Reform), which includes:

５. Secretary General of the Council of Ministers / member

７. Executive Director of the Supreme Committee for Reform / member and rapporteur

８. Advisor to the Prime Minister for Strategic Affairs / Member

９. Advisor to the Prime Minister for Economic Affairs / Member

１０. Head of the Legal Department in the General Secretariat of the Council of Ministers / member

１２. A representative of each of the two main international support organizations (International Contact Group, World Bank Group) / observers, without either of them having the right to vote.

B. The Supreme Committee for Reform undertakes the following tasks:

１. Supervising the implementation of the reform program as a whole, and the projects that it consists of, according to the plans and timetables approved by the Supreme Committee for Reform, including adding, deleting or amending new projects.

２. Ensure the availability of timely administrative and financing approvals during implementation, and take the necessary measures to overcome emerging obstacles.

３. Coordinate the work of the various agencies responsible for implementation and support, define the duties of each of them, and achieve integration between them.

４. Monitoring good performance and implementing accountability in accordance with the law.

５. Submit periodic reports on the progress of the reform program to the Council of Ministers.

１. Cabinet Resolution No. (12) of 2020 shall be repealed, and the (Supreme Committee for Reform) replaces the (Emergency Cell for Financial Reform) formed according to it.

４. The Supreme Committee for Reform has an executive director named by the Prime Minister, who is directly related to him and authorizes the necessary powers to implement the committee’s decisions and achieve its goals, and is tasked with following up the implementation of its decisions and conducting its day-to-day affairs under the supervision of its president.

５. The Supreme Committee for Reform may form work teams or sub-committees to carry out specific tasks, and grant them the necessary powers to achieve their goals and facilitate their work.

６. The higher authority may host whomever it deems necessary to attend its meetings, in order to achieve its tasks.

７. The Prime Minister authorizes cabinet powers for the purposes of the Supreme Committee for Reform.

Dr.. The formation of a cell called (Reform Management Cell) headed by the Executive Director of the Supreme Committee for Reform, to be based in the Prime Minister’s Office and undertake the following tasks:

１. The executive management of the reform program is completely under the supervision of the Supreme Committee for Reform.

２. Provide support to the officials of the reform program projects and the relevant executive teams, with the aim of improving performance and ensuring that the best implementation paths are chosen to achieve the set goals.

３. Enhancing communication between project officials and work teams on matters pertaining to each project, and coordinating interconnectedness between different projects within the reform program in order to enhance complementarity and synchronization in implementation.

４. Dealing with developments directly as a first level for reporting and solving problems.

６. Assist in identifying the procedures required of the project official in the event that implementation delays or deviates from the correct path.

７. Follow-up and accountability of the officials of the reform program projects in the event of delay in achieving the goals established within the approved timetable.

８. Any additional tasks assigned to the cell by the Supreme Committee for Reform.

And the. All government agencies are obligated to give the reform program priority, cooperate and coordinate with the Reform Administration Cell, and submit the required reports and data within the specified timeframes, including naming an official with a grade of no less than a general manager for each project, and allocating the work teams and human and material resources required to ensure the progress of the program Repair according to approved plans.

Fifth / １. Authorizing the Minister of Justice, Mr. (Salar Abd al-Sattar Muhammad Kurda), the power to sign the Arab Protocol to Prevent and Combat Maritime Piracy and Armed Robbery annexed and supplementary to the Arab Agreement to Combat Organized Crime National Borders, based on the provisions of Article (20 / Sixth) of the Constitution.

２. The Ministry of Foreign Affairs prepares the necessary authorization document in the name of the government of the Republic of Iraq for the Minister of Justice in accordance with the approved contexts, and submits it to the General Secretariat of the Council of Ministers in order to obtain the signature of the Prime Minister.

Sixth / １. Authorizing the Minister of Justice, Mr. (Salar Abd al-Sattar Muhammad Kurda), the power to sign the Arab Protocol to Prevent and Combat Human Trafficking, Especially Women and Children, supplement and supplement to the Arab Agreement to Combat Organized Crime Across National Borders, based on the provisions of Article (20 / Sixth) of the Constitution.

２. The Ministry of Foreign Affairs prepares the necessary authorization document on behalf of the Government of the Republic of Iraq for the Minister of Justice in accordance with the approved contexts, and submits it to the General Secretariat of the Council of Ministers in order to obtain the signature of the Prime Minister.

Seventh / The General Company for Grain Trade / one of the Ministry of Trade companies spent an amount of (100,000,000,000) dinars, only one hundred billion dinars of the cash available to it to pay farmers’ dues for the season (2019-2020), provided that this amount is deducted later when the amounts are received Farmers dues from the Ministry of Finance.

Eighth / Approval of the implementation of the Memorandum of Understanding between the Government of the Republic of Iraq and Stanford University, regarding the restoration of original documents belonging to the period of extermination.