Sunday (tomorrow) at midnight Amazon will be shutting off all of our servers in an attempt to completely remove free speech off the internet. There is the possibility Parler will be unavailable on the internet for up to a week as we rebuild from scratch. We prepared for events like this by never relying on amazons proprietary infrastructure and building bare metal products.

We will try our best to move to a new provider right now as we have many competing for our business, however Amazon, Google and Apple purposefully did this as a coordinated effort knowing our options would be limited and knowing this would inflict the most damage right as President Trump was banned from the tech companies.

This was a coordinated attack by the tech giants to kill competition in the market place. We were too successful too fast. You can expect the war on competition and free speech to continue, but don’t count us out.

Brent crude was $ 56.25 per barrel, up by $ 1.87, or 3.44%, while West Texas Intermediate crude futures closed at $ 52.72 a barrel, and recorded a rise of $ 1.89, or 3.72%, which is the highest since late February.
Saudi Arabia pledged last week to voluntary additional cuts in oil production by one million barrels per day in February and March next, as part of an agreement under which most OPEC + producers will keep production steady during the new closures.
The rise in global stocks pushed the Japanese and US Nikkei indices to new highs, as investors focused on more stimulus to repair the economic damage of the epidemic.
The northern hemisphere is facing a cold winter, while the coldest weather in Beijing since 1966 has led to a rise in domestic energy prices, and temperatures in most parts of Europe and Asia are expected to remain below average throughout January.
Ali al-Rubaie

You can find Walt on: 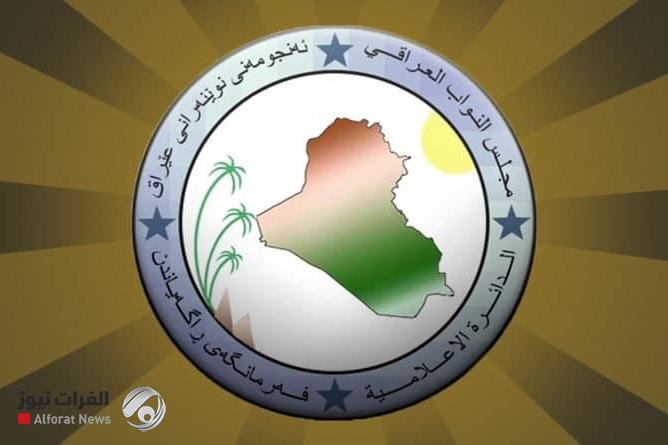 {Baghdad: Al Furat News} The House of Representatives announced, on Saturday evening, the agenda for its 34th session, to be held next Monday.

The agenda included the completion of the vote on the first amendment to the human organ transplantation law, the first reading of four projects, in addition to the second reading of two laws, including the federal budget for 2021.

The agenda for Monday’s session included a discussion of the Health and Environment Committee’s report on water pollution, and general discussions. 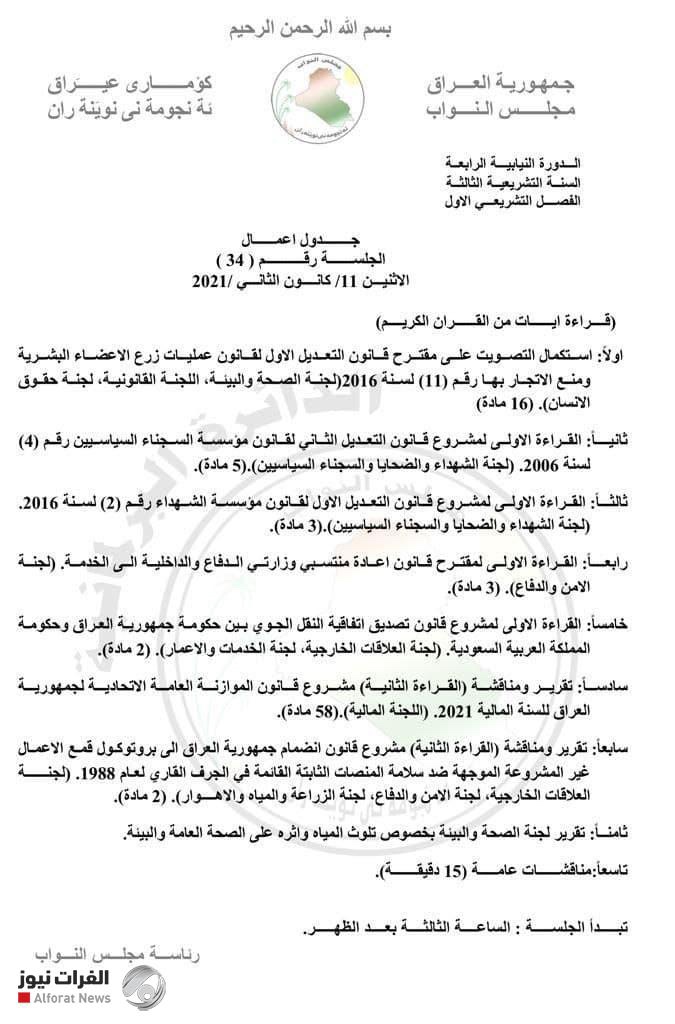 {Baghdad: Al Furat News} Today, Saturday, the Council of Ministers held a regular session headed by the Prime Minister, Mustafa Al-Kazemi, to discuss public affairs and developments in events, as well as the topics on the agenda.

According to the government statement, the Euphrates News received a copy of it, the council listened to “a briefing on developments in combating the Corona pandemic, and the measures that the responsible authorities continue to take and implement.”

The council also heard a presentation by the advisor to the prime minister for election affairs, Abdul Hussein al-Hindawi, regarding the progress of preparations for the upcoming elections, the needs of the elections commission, the cooperation of ministries and state institutions to facilitate their work, the importance of international monitoring to ensure their integrity and stressing the importance of intensifying efforts to encourage voters to register biometric during the period. Remaining announced by the Independent High Electoral Commission. ”

According to the statement, the Council considered its agenda and the topics listed on it, and took a number of decisions, namely:

1- Approving the recommendation of the Ministerial Council for Energy, according to what was stated in the Ministry of Electricity Book No. 511 of January 7, 2021, which included the following:

A- Excluding the chemicals listed in the aforementioned letter of the Ministry of Electricity, supplied by the Chinese CMEC company contracting with the Ministry of Electricity, in implementing the Salah al-Din Thermal Power Plant project, from issuing an import permit and removing the materials from customs upon their arrival at the ports and delivering them to the station above. , Provided that the import license and the required documents are completed later by following up with the General Company for Electric Power Production – Northern Region, with the Ministry of Trade / The General Company for Iraqi Fairs and Commercial Services, within a maximum of 60 working days, and the General Company for Electric Power Production / Northern Region shall bear it. Legal liability in the event of failure to do so.

2- Approval of the draft law on statistics and geographic information systems, which was verified by the State Council and referred to the House of Representatives, based on the provisions of Articles 61 / Clause First and Article 80 Second of the Constitution, taking into consideration the opinion of the General Secretariat of the Council of Ministers, which is confirmed in the relevant legal department memo The number MD / S / 2/2/281 LQ, dated 10/4/2020, and the remarks of the members of the Council of Ministers during the meeting session.

4- Approval of the renewal of the work of Cabinet Resolution No. 277 of 2014 for an additional period of 10 years, starting from the date of this decision, provided that its content is amended according to the following:

Third / Reconsidering previous lease contracts concluded according to the aforementioned cabinet decision, in accordance with the controls mentioned in paragraphs (first and second) above.

Fourth / It is not permissible for the club and the beneficiaries to invest in the lands, buildings and properties of the Ministry of Youth and Sports that it occupies. Rather, the investment, musataha or lease shall be according to a request submitted to the Ministry above, for the purpose of organizing a fundamental contract between the two parties, provided that the lease, musataha or investment is consistent with the objectives The Ministry of Youth and Sports and its orientations, according to designs to be prepared later in line with the architectural nature of the club and the requirements of the Department of Urban Planning in the region.

The Ministry of Foreign Affairs prepares the necessary authorization document on behalf of the Government of the Republic of Iraq for the Minister of Planning in accordance with the approved contexts, and submits it to the General Secretariat of the Council of Ministers, in order to obtain the approval of the Prime Minister.

6- Approval of the continuation of the work of Cabinet Resolution 54 of 2020 by the Ministry of Immigration and Displacement in response to the needs of the displaced and returning families from displacement and to relieve their burden, until the Federal Budget Law for the fiscal year / 2021 is issued and its instructions. 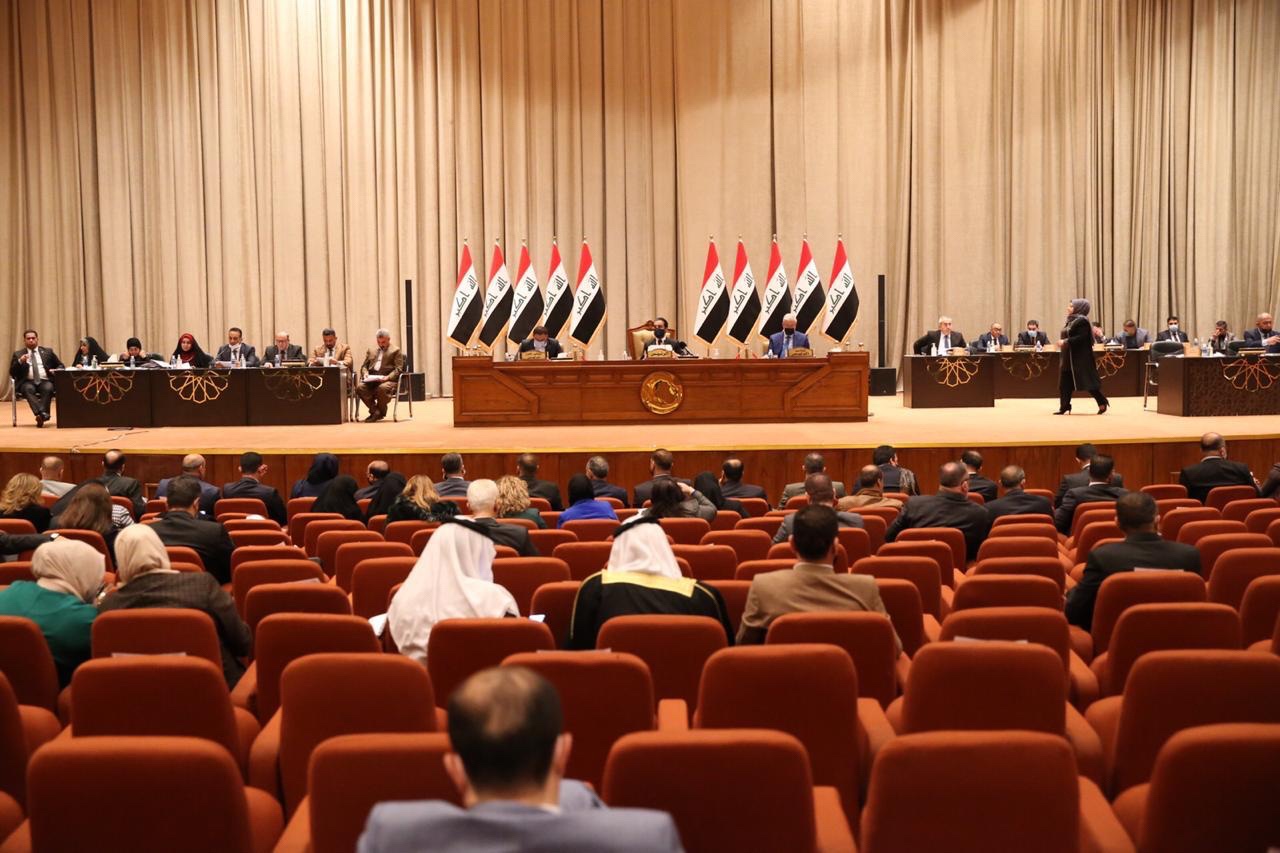 Shafaq News / On Saturday, the Iraqi parliament completed the first reading of the draft federal budget bill for the fiscal year 2021.

This was announced by the Council’s media department in a brief statement.

For his part, Parliament Speaker Muhammad al-Halbousi instructed the Finance Committee to provide fairness to those covered by Resolution 315, all daily contracts and employees, lecturers in all ministries and departments, and the necessary action within the 2021 budget, according to the official Al-Sabah newspaper.

The newspaper pointed to “a parliamentary signature campaign to add Resolution 315 and all daily contracts and employees and lecturers in all ministries and departments within the 2021 budget.”

The House of Representatives held, on Saturday, the first session to read the Federal Budget Law for 2021, headed by its President, Muhammad al-Halbousi.

The Media Department in the House of Representatives stated, in a statement that Mawazine News received a copy of, that “the Speaker of Parliament, Muhammad al-Halbousi, opened the works of Session No. (33), from the fourth parliamentary session, the third legislative year, the first legislative term.”

It is hoped that the House of Representatives will begin, in its session, the first reading of the Federal Financial Budget Law for 2021.

While the Central Kifah Stock Exchange registered at the opening of the stock exchange this morning, 143600 Iraqi dinars against 100 US dollars.

Our correspondent indicated that the selling and buying prices also decreased in the exchange shops in the local markets in Baghdad, where the selling price reached 144,250 Iraqi dinars, while the purchase prices reached 142,250 dinars per 100 US dollars.