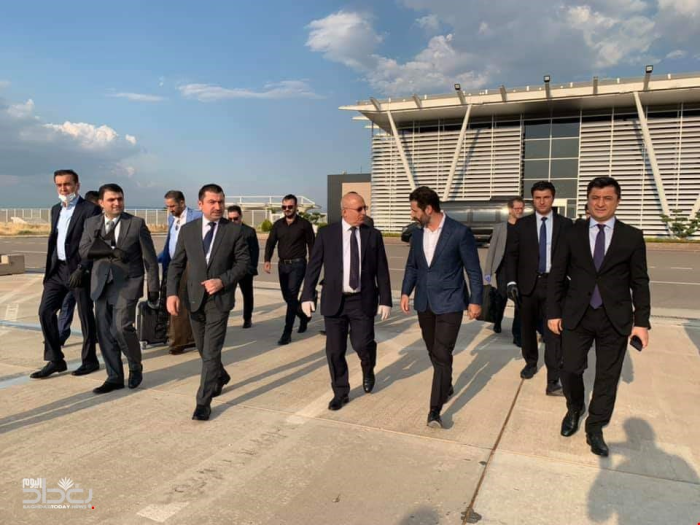 The Kurdistan region of Iraq intends to send a delegation to the capital, Baghdad, to negotiate the fate of the salaries of Kurdish employees, after the tug of war that occurred after the parliament voted on the borrowing law, amid the Kurdish parliament’s boycott.

Last Thursday, Parliament approved the internal and external borrowing law worth 12 trillion dinars (10 billion dollars), in an effort to end the crisis of delayed payment of state salaries that has been going on for nearly two months.

The withdrawal of the Kurdish representatives from the voting session came as an objection to the article stipulating that the Kurdistan region’s share of the total actual spending (current expenditures and investment project expenditures) be determined after excluding sovereign expenditures, “on the condition that Kurdistan is committed to paying the dues of oil exported from the region and in the quantities specified by the Iraqi Oil Marketing Company. “Sumo exclusively and the federal non-oil revenues, and in the event of non-commitment by the region, the expenses may not be paid to the region, and the violator of this text bears legal responsibility.”

In various and numerous situations, issued by higher authorities in the Kurdistan region, following the parliament’s approval of the borrowing law, the Kurdish atmosphere ignited with statements and statements that reached the point of asking the Kurds to leave the capital, Baghdad.

The spokesman for the Kurdistan Regional Government, Gutiar Adel, had confirmed earlier that a Kurdish delegation will visit the capital Baghdad soon, to bring points of view closer and reach a comprehensive agreement against the background of the crisis that erupted after the session of passing the borrowing law.

According to the spokesman, “The delegation will prepare all the documents and figures about the region’s oil exports, border crossings revenues and the number of employees, and they will be presented to the federal government.”

Adel added in an interview with (Baghdad Today), that they are “waiting for a decision from the government to send an amount of 320 billion dinars and complete the legal agreement concluded with it until the end of this year, because the agreement is approved in the 2019 budget law.

He pointed out that “the upcoming visit comes to complement the transparency with which the regional government deals in all its dialogues with Baghdad, and we are ready to hand over revenues according to the next agreement.”

In explaining the Kurds’ step to an understanding on the borrowing law, Uday Shaalan, the representative of the Al-Fateh Alliance, confirmed today, Thursday, that it is not possible to amend or cancel the paragraph that concerns Kurdistan of the borrowing law.

Shaalan told (Baghdad Today), “The Kurdish forces conducting dialogues with the political forces in the capital, Baghdad, with the aim of modifying or abolishing the paragraph binding on Kurdistan by the borrowing law. It did not come with any results. This matter is legislated according to a law, and this paragraph cannot be tampered with according to the dialogues. Or political and other courtesies. ”

He added that “the law is amended by a law, and the amendment of the paragraph binding on Kurdistan by the borrowing law needs a new law in Parliament,” indicating that “the parliamentary and political majority rejects any amendment or cancellation of this paragraph, but rather stresses the need to adhere to it, and the government cannot not apply it.” , Being binding on all authorities according to the law enacted in the House of Representatives.

There are no guarantees

A member of the Kurdistan Regional Parliament, Othman Karim, confirmed that there are no guarantees that the federal parliament will retract the vote on the fiscal deficit financing law.

Karim said in an interview with (Baghdad Today) that “the deficit financing law has become legal and enforceable, and it is temporary until the end of this year,” indicating that “the delegation that will go to Baghdad will discuss the budget for next year.”

He added that “the most important thing at the present time is to guarantee the Kurdistan region’s share in the 2021 budget, and the comprehensive agreement, and to approve a law that is not subject to the whims of political blocs, and we have received positive assurances from the federal government and political blocs in this regard.”

According to the text of the law voted by Parliament, estimates of the necessary expenditures for the remainder of the current year 2020 amounted to 22.5 trillion Iraqi dinars ($ 18.7 billion).

This is the second time that the government has asked Parliament to grant it the authorization to borrow, with the aim of securing operating expenses, on top of which are the salaries of employees.

Parliament had approved on June 24 a bill that allowed the government to borrow 15 trillion dinars (12.5 billion dollars) internally, and 5 billion dollars abroad to cover the fiscal deficit.

The country is experiencing a suffocating financial crisis due to the decline in oil prices due to the Corona pandemic crisis, which has paralyzed large sectors of the world’s economies.

Before the Corona crisis, revenues from selling crude amounted to about $ 6 billion per month, but they have almost halved this year.

Shafaq News / On Thursday, the UN representative in Iraq, Jenin Blashart, urged the governments of Baghdad and Erbil to accelerate the implementation of the “Sinjar Agreement,” while expressing her optimism about seeing a “change” towards stability in the judiciary in the coming days.

“I am very happy to be here in Nineveh, and I was also happy to meet all the components of Senja,”   indicating that “the conversation was about the agreement,” Blashart said in a press conference held today, during a visit she made today to Nineveh Governorate, attended by Shafaq News Agency .

She added, “It took a long time to stabilize Sinjar district, but we started in this matter,” stressing the need to “accelerate the process of reconstruction, improve services, and return the displaced to their homes.”

She explained that “the most important thing is stability, security structures and unified management,” noting that “the agreements are not always complete, but I was talking with the parties in Baghdad and Erbil and I urged them to accelerate steps to implement the agreement on the ground.”

She pointed out that “the most important thing is that I spoke to the various components of Sinjar society,” explaining that “these people are still suffering from the consequences of what happened.”

{Baghdad: Al Furat News} The Ministry of Finance presented, today, Thursday, a customs automation project through a program presented by the United Nations Conference on Trade and Development.

The information office of the ministry stated in a statement that Al Furat News received a copy of it, that “the automation system will strengthen the management of the financial situation in light of the current financial crisis, and develop the necessary solutions to achieve financial reform, and improve the performance of financial institutions in a way that strengthens the restructuring of the Iraqi economy in the face of future challenges and will contribute to solving Economic problems in Iraq. ”

The statement added, “The Ministry of Finance, in cooperation with the United Nations Conference on Trade and Development UNCTAD, sought to implement the (ASYCUDA electronic customs data system) for the purpose of implementing automation and simplifying procedures in customs as part of its development and improvement of its performance that achieves rational and effective management as well as achieving financial sustainability. The economy diversified according to the principles of integrity, transparency and combating corruption, and the ministry seeks to make it one of the most important sources of support for the state treasury after oil revenues.

The statement pointed out that “the Ministry of Finance has started submitting the customs automation project to the Council of Ministers, which authorized the Minister of Finance to negotiate and contract with UNCTAD to automate the customs work, as the ASYCUDA system is one of the global customs systems and is applied in more than (90) countries in the world.”

The Ministry of Finance disclosed the objectives of the program presented by the United Nations Conference on Trade and Development, which is applied to more than 90 countries in the world, as follows:

The program enjoys high transparency as it is from an international organization and according to international standards specialized in customs procedures.

Calculating and collecting customs duties and other taxes at a rate of 100% and counting the unknown expenses related to customs operations.

Modern customs control that contributes to protecting the national economy.

Reducing the clearance time for goods in addition to contributing to combating customs and tax smuggling by relying on the selective system by specifying the data path and eliminating corruption.

Draw up the economic plan for the trade exchange process according to the reliable and accurate commercial and financial data provided by the electronic system.

Providing customs ports and their management with fast and accurate information on time and extracting foreign trade statistics.

The program will be managed by Iraqi hands after being trained on the program by international experts, which will enhance the performance improvement of human resources. 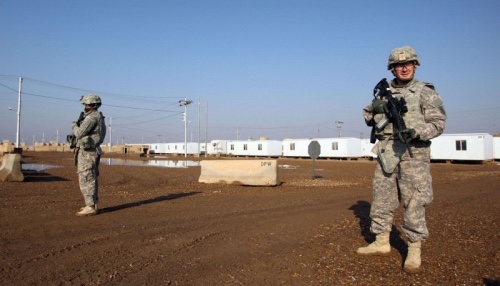 National Security Adviser Qassem Al-Araji attended, today, Wednesday, the joint meeting between the Iraqi and American sides on scheduling the withdrawal of US forces from Iraq.

On the Iraqi side, Foreign Minister Fuad Hussein, the Army Chief of Staff, Lieutenant General Abdul Amir Yarallah, and the Deputy Commander of Joint Operations, Lieutenant General Abdul Amir Al-Shammari, attended on the Iraqi side, while the American side was represented by Ambassador Matthew Tueller and the commander of the International Coalition in Iraq and Syria.

The meeting discussed the continuation of cooperation between the international coalition and the Iraqi forces against the terrorist organization ISIS, and the confirmation that all the movements of the coalition forces are with the approval of the Iraqi side, and it was agreed to hold other meetings to reach the final agreement on the redeployment of American forces outside Iraq. 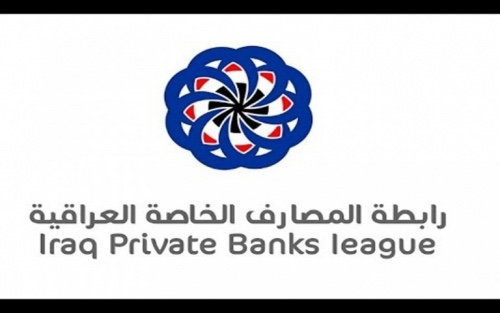 The Iraqi Private Banks Association announced, on Thursday, its support for the reforms undertaken by the Central Bank of Iraq aimed at banks and monetary policy that will contribute to the development of the Iraqi economy and the banking sector, which will reflect positively on economic development.

The Association of Private Banks said in a press release, “The Central Bank of Iraq is currently working on major and influential reforms, which will lead to the development of the banking sector and the Iraqi economy, especially in the difficult financial crisis that Iraq is currently experiencing as a result of low oil prices.”

She added, “The Central Bank of Iraq is adopting a wise policy, during this stage under its new management, which is represented in increasing confidence between the banking sector and citizens, increasing cash and pledging credit by supporting small, medium and large enterprises in addition to the successful experience that the Central Bank has undertaken in launching a platform for letters of guarantee.” .

The association noted that “it appreciates the great steps taken by the central bank in increasing financial inclusion and supporting banks in their work to diversify banking services, in addition to international cooperation between the central bank and its counterparts from international central banks, which leads to the development of relations between Iraqi and foreign banks, and that these policies and procedures will lead to Increasing the banking services provided by banks to the aspirations of the Iraqi citizen.