A statement by the Ministry stated that: Al-Jubouri chaired the 34th meeting of the National Committee for Iraq’s accession to the World Trade Organization to discuss the stages of Iraq’s accession and the most important technical files that were completed during the past years, including the file of the memorandum of the foreign trade system for Iraq, the file of goods, services, intellectual property and the implementation plan.

Al-Jubouri stressed the need to clarify the importance of Iraq’s accession to the organization as it allows the establishment of a balanced trading system in addition to raising the standard of living, creating job opportunities, and eliminating unemployment through the development of investments, development of real income and increased production.

He considered this file one of the important files that contributes to comprehensive economic reforms.

During the meeting, five important items were discussed and in accordance with the requirements of the current stage and preparation for holding the third round of negotiations with the organization, which are the foreign trade policy memorandum for Iraq, goods files, the implementation plan for Iraq , the trade in services and service sectors completed, and the intellectual property file.

It is noteworthy that Iraq was accepted as an observer member in the organization in 2004, which comes as a prelude to full accession, as this period of time allows acquaintance with the agreements that the World Trade Organization supervises their application and which form part of the multilateral trading system./ End

The agenda includes “putting up a general topic for discussion in the presence of the Minister of Education and Scientific Research regarding {expansion of study seats}, an oral question addressed to the Governor of the Central Bank of Iraq by MP {Faleh Al-Sari} and an oral question addressed to the President of the Federal Service Council by Representative {Kazem Al-Shammari}” .

The agenda will include general discussions for a period of 15 minutes.”

The Kurdistan Democratic Party (KDP) considered the passage of the fiscal deficit financing law in violation of the constitution, laws and agreements in force because it did not include the region’s dues.

A member of the Kurdistan Democratic Party, Repin Salam Arti, said in a press statement: Passing the fiscal deficit financing law blew up all previous laws and agreements concluded between the center and the region. Pointing out: The region’s position regarding this prejudice will be in stages, the first being internally through negotiation between the main parties and the three presidencies in the region for the sake of working techniques, as well as negotiating with Baghdad to solve the crisis.

He added: The previous agreement included sending the Kurdistan Regional Government 320 billion dinars as dues to the region during the remaining three months of the current year. Indicating: that this amount is a quarter of the dues of the Kurdistan region represented in the real value of the salaries of employees.

He pointed out: The 2019 Budget Law in Article 10, Paragraph C, according to this paragraph, the supervisory authorities must settle the financial crisis between the center and the region, but this article has not been implemented.

Stressing: The law was racially passed despite the fact that the constitution stipulated that the authorities must provide a decent life for citizens without discrimination.

He explained: According to the agreement concluded between Baghdad and the region regarding the delivery of 250 thousand barrels per day and the revenues of the region’s outlets, the law will be enforceable whether the region is committed or not.

Stressing: The Federal Financial Resources Law in Article 28 stipulates that in the event that the region fails to deliver 250 thousand barrels to Baghdad, a quarter of the value of this share, which is estimated at 300 billion dinars, will be deducted, while the federal government deducts about 580 billion dinars per month from the region’s share in the budget .

He stressed: that the region’s dues are estimated at 900 billion dinars per month, but the federal government sends only 320 billion dinars. He attributed the reason for fixing the quota of 250 thousand barrels to the Kurdistan region, because the region provides its citizens with fuel from local oil production, according to a previous agreement concluded during the time of the government of Nuri al-Maliki, the second session. 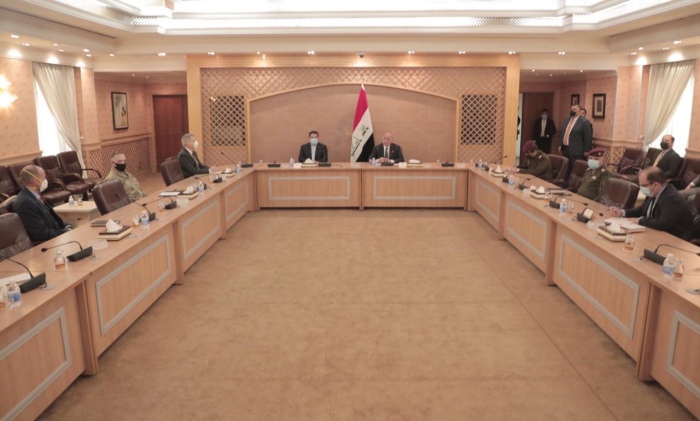 US withdrawal from Iraq

Shafaq News / The National Security Adviser, Mr. Qassem Al-Araji attended, on Wednesday, the joint meeting between the Iraqi and American sides, on scheduling the American withdrawal from Iraq. This meeting comes hours after the US embassy in the Green Zone in central Baghdad was subjected to missile strikes, which caused a number of civilian casualties.

A statement by the Information Office of the National Security Adviser stated that Al-Araji attended the meeting “with the participation of the Minister of Foreign Affairs, Dr. Fuad Hussein, the Chief of Staff of the Army, Lieutenant General Abdul Amir Yarallah, and the Deputy Commander of Joint Operations, Lieutenant General Abdul Amir Al-Shammari, representatives of the Iraqi side.”

On the American side, Ambassador Matthew Tueller and the leader of the international coalition in Iraq and Syria attended, according to the statement.

He added that the meeting touched on the continuation of cooperation between the international coalition and the Iraqi forces against the terrorist organization ISIS, with an emphasis that all the movements of the coalition forces are with the approval of the Iraqi side.

The statement pointed out that “it was agreed to hold other meetings, to reach a final agreement on the redeployment of US forces outside Iraq.”

Shafaq News / A source in the Iraqi Ministry of Finance revealed on Wednesday the price of a barrel of oil approved in the country’s draft budget for the next year 2021 and the date for the ministry to complete the preparation of the draft draft.

The source told Shafaq News, “The Ministry of Finance will complete the preparation of the draft general budget bill for 2021 and present it to the Council of Ministers next week.”

He added that “the Council of Ministers will discuss and approve the draft budget during its regular session (Tuesday) or in a special session, after which it sends it to the House of Representatives for a vote on it.”

The source revealed that “the price of a barrel of oil specified in the draft budget ranges between 35-40 dollars.”

Iraq relies on oil sales revenues to finance 95 percent of state expenditures. The country is experiencing a stifling financial crisis this year due to the decline in crude prices on global markets due to the Corona pandemic.

Iraq did not approve a financial budget for the current year due to the circumstances that accompanied the unprecedented popular protests that toppled the government of Adel Abdul Mahdi late last year.

Thousands of public servants hold banners and shout slogans during a demonstration to protest non-payment of salaries and corruption at public enterprises, in Sulaymaniyah, Iraq on 18 December 2017 [Feriq Fereç/Anadolu Agency]

Hundreds of temporary employees working for the Iraqi Ministry of Electricity yesterday demonstrated in the capital Baghdad demanding the government pay their outstanding salaries, Anadolu reported.

The agency said the demonstrators gathered in front of the headquarters of the Ministry of Finance and raised banners calling on Prime Minister Mustafa Al-Kadhimi to intervene and pay their salaries.

One protester, Mahmoud Al-Hamidi, told the agency that the ministry’s temporary employees had not received their salaries since March.

“Our living conditions are very difficult. Debts have accumulated over the past months, and I cannot find a way to provide for my family,” he added.

According to government figures, more than 80,000 work for the Ministry of Electricity.

Former Prime Minister, Adel Abdul Mahdi, hired hundreds of employees on a “temporary employment” basis in an attempt to calm anti-government protests without providing financial cover for them.

The government has been struggling to secure the salaries of civil servants for a few months due to the decline in global oil prices.

In a bid to end the salary crisis, parliament last week approved the government’s request to borrow 12 trillion Iraqi dinars (about $10 billion) from local banks.

Shafaq News / The Iraqi Foreign Minister, Fouad Hussein announced on Wednesday that Baghdad and Washington had reached an agreement on the withdrawal of 500 American forces from the country, bringing the number of those forces to 2,500.

Fouad Hussein said in a press conference held today, that “after the important communication and consultation between Prime Minister Mustafa Al-Kazemi and US Secretary of State Mike Pompeo, it was agreed to announce the withdrawal of 500 other US forces, bringing the total number of those forces present in Iraq to 2,500. an item”.

He added, “We have entered the fourth and final stage of the withdrawal of US forces, and when we talk about this stage, we have reached zero and that the combat operations end, which was the reason for the presence of foreign forces in Iraq,” stressing that the American forces that will remain in Iraq are not combat.

The minister continued by saying that “foreign forces came from 80 countries to the country at the request of the federal government,” adding that “in light of the military reports and in the military sense, ISIS has been defeated, but at the same time its terrorist cells are still present in the Hamrin Hills, the Badia Desert, and South West of Anbar, the outskirts of Kirkuk, and on the other side in Syria. ”

Hussein noted that the federal government will continue to coordinate with its US counterpart, stressing that future work with the American side will continue in the field of intelligence information, military advice and training of Iraqi forces.

On Tuesday, the Pentagon announced that it would reduce the number of US forces in Iraq and Afghanistan .

Acting US Defense Secretary Christopher Miller said the Pentagon would begin withdrawing part of US forces from Afghanistan and Iraq .

He indicated that the decision to reduce forces was taken based on the directives of outgoing US President Donald Trump and after consulting with the National Security Council and military leaders.

The leader of the Republican majority in the US Senate, Senator Mitch McConnell, issued a warning to his ally, President Donald Trump, against accelerating the pace of the withdrawal of US forces from Afghanistan or Iraq, considering that such a measure would give extremist movements a ” great propaganda victory .”

McConnell said in a speech in the Senate that “the consequences of a premature US withdrawal may be worse than Obama’s withdrawal from Iraq in 2011, which led to the rise of ISIS .”

He added that such a withdrawal would represent a “abandonment” by the United States of its allies, would pave the way for the Taliban movement to extend its influence in Afghanistan, and would allow ISIS and Al Qaeda to regroup in Iraq .

Second round of Sulaimani International Book Fair kicks off with the participation of over 200 print and publication companies from eighteen countries in Tasluja area in west of Sulaimani, Kurdistan Region on November 18, 2020. (Photo Credit: NRT Digital Media)

SULAIMANI — Second round of Sulaimani International Book Fair commenced on Wednesday (November 18) in Tasluja area, 20.5 km west of Sulaimani city, to showcase miscellaneous books with the participation of more than 200 print and publication centers from over eighteen countries.

“The books are various and the prices will change during the fair’s days to match with the financial capacity of the guests and readers,” Khurshid said.

He also said that a market had been opened in the show for the local and foreign companies to display daily essentials, adding that ten awards will be provided each day.

NRT Digital Media reporter Zhalla Muhammad said that the books depicting radicalism and books not licensed by the Kurdistan Regional Government (KRG) Youth and Culture Ministry are not allowed to take part in the fair.