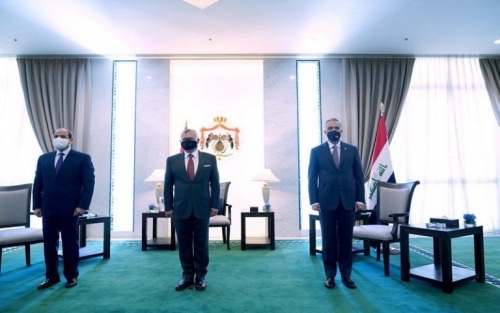 Economist Razzaq Al-Aboudi considered, on Monday, the moves of Al-Kazemi to the Jordanian-Egyptian investments, which are an American plan to end any hope of the Chinese agreement entirely on one side and hit the Iranian economy on the other side.

Al-Aboudi said, “The Iraqi-Chinese agreement is the best economic case for Iraq over recent decades, and it can revive the Iraqi economy.”

He added, “Washington is not convinced of the Chinese agreement, as the Al-Kazemi government moves toward contracting investments with Jordan and Egypt, although the two sides do not have any companies comparable to Chinese companies.”

Al-Aboudi explained that “the purpose of these agreements is to strike at the Chinese agreement and end it completely,” noting that “another goal is to strike the Iranian economy by eliminating the economic friendship between Iraq, China and Iran.”

Shafaq News / The Iraqi politician close to the US administration, Mithal Al-Alusi, revealed on Monday new details, which carried a surprise, regarding the discussions that an Iraqi government delegation had conducted during its recent European tour regarding normalization between Baghdad and Tel Aviv.

Al-Alusi told Shafaq News, “The official Iraqi delegation, which recently conducted a European tour, listened and discussed the issue of normalization between Iraq and Israel.”

He added, “This matter is surrounded by high secrecy, especially after this matter was revealed before it happened through the media.”

Al-Alusi revealed a surprise in this regard, saying, “The official Iraqi delegation sent a message to the world   that we want normalization between Baghdad and Tel Aviv, but the time is early for this, especially with the financial and security crisis and the electoral crisis in Iraq.”

He concluded by saying, “This normalization may soon see the light.”

Shafaq News Agency revealed from its own sources that the Iraqi delegation will discuss normalization with Israel before the start of the tour.

And Israel concluded agreements to normalize the situation with each of the Emirates, Bahrain and Sudan in the past few weeks. Iraq considers these agreements a “domestic affair” for these countries.

Today, Monday, a member of the Parliamentary Economic and Investment Committee, Faleh Al-Ziyadi, held the government responsible for the delay in paying employees’ salaries, pointing out that the government is trying to create a gap between the parliament and the Iraqi street.

He added, “There is clear government confusion in the statements of the government spokesman and the Minister of Finance.”

He pointed out that “the Presidency of the Council of Ministers did not even respond to the book sent by the Finance Committee regarding Ahmed Mulla Talal’s recent statements regarding the possibility of paying salaries without referring to borrowing.”

Yesterday, the Minister of Finance, Ali Allawi, confirmed that the salaries of employees for the month of October may be paid after two weeks if the law on financing the fiscal deficit has not passed in the House of Representatives.

Allawi said in a statement to the official news agency (Baghdad today) that “the financial crisis that the country is going through is not born today, and if the parliament votes on the deficit financing law, salaries will be released directly.”

He added that “reducing Iraq’s share of oil exports has an impact on revenues,” noting that “options to maximize revenues quickly and in the short term in order to bridge the deficit are almost impossible.”

Allawi added that “the current government faced the crisis without financial liquidity,” noting that “the salaries of employees for the month of October may be paid after two weeks if the deficit financing law has not passed.”

Speaking about internal borrowing to secure expenditures, the Minister of Finance explained that “the mechanism for repaying domestic borrowing is through the revenues generated from oil and the benefits resulting from hypothetically,” noting that “Iraq’s external debts range from 60 to 70 billion dollars, while the internal debt is estimated at 60 trillion. Dinar”.

And that “there is a strong trend to activate the collection of electricity through the installation of electronic meters,” stressing that “the 2021 budget will be presented this month and includes the implementation of the first phase of the white paper 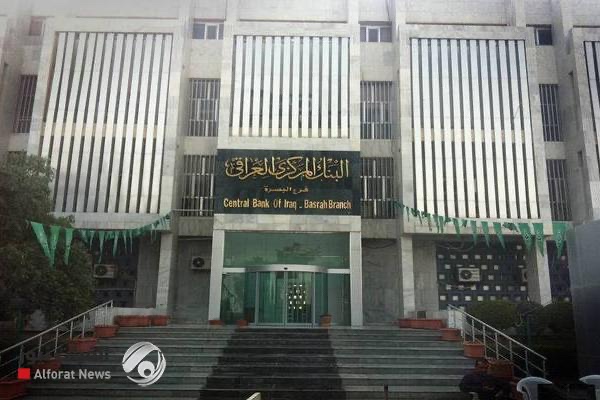 {Euphrates News: Baghdad} The Central Bank of Iraq opened, on Monday, an account with (EuroClear) to develop the performance of foreign reserves.

A statement of the Central Bank, a copy of which was received by the Al Furat News Agency, stated that, with unremitting efforts by the administration of the Central Bank of Iraq in developing the management of foreign reserves, this bank opened an account with (EuroClear Foundation), which is the most important custodian institution that provides document keeping services. Financial as well as other services, including ease of conducting investment operations without the need to conclude agreements with the source of securities, low costs of securities preservation and ease of follow-up.

The statement indicated that soon, the process was carried out by central banks and correspondent banks, which impose an additional commission on keeping these papers, as well as the limited investment due to the multiplicity and complexity of procedures in the presence of the intermediary.

He added that this step is important in the work of the Central Bank of Iraq, as it simulates international practices in the process of investing foreign reserves, and is an important achievement that this bank adds to its set of achievements in reserve management and international transactions. 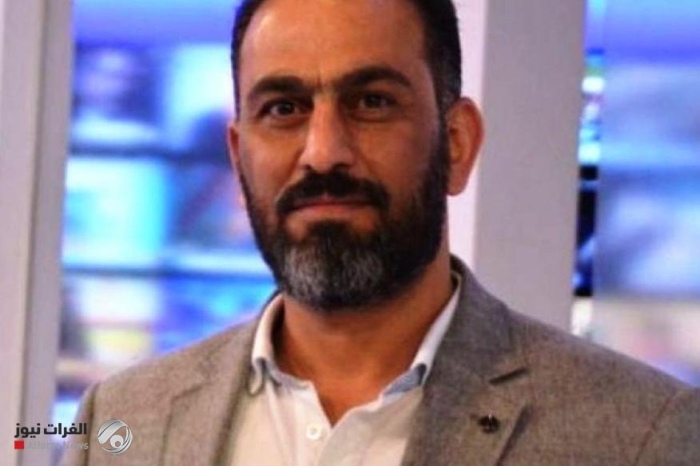 {Baghdad: Al-Furat News} The representative of the Iraqi coalition, Hassan Fadam, revealed the date of sending the parliamentary election law to the Presidency of the Republic for the purpose of ratification.

“After the parliament completed the election law and the electoral districts and it was distributed, the Parliamentary Legal Committee had the largest and most prominent role in completing the law, and it made great and painstaking efforts with meetings for tens of hours to mature the constituencies and come up with a satisfactory mechanism for the people, political forces and protesters,” Fadam said.

And he supported, “I think, after completing this law and transferring it to the competent authorities within the House of Representatives to complete its proper legal formulation and then send it to the Presidency of the Republic for approval and publishing it in the Official Gazette, then these administrative procedures will be completed next week and the law becomes effective.”

He pointed out that “the Electoral Commission has begun its work on the issue of electoral districts as stated in the election law voted by the House of Representatives.”

Shafaq News / Parliament Speaker, Muhammad al-Halbousi announced, on Sunday, that the parliament is ready to facilitate the government’s mission in a way that secures the provision of financial liquidity.

Al-Halbousi’s office said in a statement received by Shafaq News, that “the latter met with the head of the political body of the Sadrist movement, Nassar al-Rubaie, and a number of members of the body, to discuss the political and economic conditions in the country.”

He explained that “the meeting discussed conducting early elections after the council completed voting on the various districts, and the Iraqi parliament elections law was completed, as well as the need to proceed with the completion of the necessary legislation, including the Federal Supreme Court Law, as it is one of the basic pillars of the political system.”

The meeting also discussed, according to the statement, “the salary crisis, and the House of Representatives’ readiness to facilitate the government’s task in order to secure the provision of financial liquidity and contribute to overcoming the financial and economic crisis.”

Iraq is currently suffering from the difficulty of distributing the salaries of employees and retirees as a result of the global drop in oil prices on which the federal budget depends, at a rate of 90%.

Despite the assurances of the Iraqi Ministry of Finance successive, that salaries are “fully insured”, it is awaiting the legislation of the borrowing law by Parliament in order to be able to release salaries that have been delayed months ago.

Shafaq News / On Monday, a political source in the Al-Fateh Alliance revealed the position of the “Shiite” political forces regarding whether the Parliament Speaker, Muhammad al-Halbousi, would remain in the position or dismiss him.

The source said, to Shafaq News Agency, that “the Shiite political forces were not always for one party at the expense of another,” indicating that “the positions of the three presidencies, each of them belong to a specific component.

The source explained, “The choice or withdrawal of confidence or dismissal of one of them is in the hands of the parties of the component assigned to him this position.”

He pointed out that “the Shiite forces informed the Sunni forces consisting   of the Iraqi Front (led by Osama al-Nujaifi) and the Union of Forces (led by al-Halbousi) that he who represents a Sunni majority in parliament and enjoys political and popular support, that the Shiite forces are with him, whether it is included in Parliament Speaker Muhammad al-Halbousi remaining in the position or I removed him from his post. ”

The Iraqi “Sunni” front, led by Osama al-Nujaifi, is seeking to withdraw confidence from Parliament Speaker Muhammad al-Halbousi, and replace him with another president from the same front after “agreement” with the Shiites and the Kurds in this regard .

This   front consists of 35 deputies, and includes the Salvation and Development Front blocs, the masses bloc, the Arab project, the Islamic party and the independent Iraqi bloc – as well as the contribution of independent representatives.

In the context, the leaders of the Iraqi Front and their representatives met this morning with the Kurdish leader Masoud Barzani in Erbil.

According to a statement issued by the front, the developments of the political situation and the serious crises that Iraq is going through were reviewed, indicating that the views were identical regarding the need to take “decisive steps to reform the political process and save it from expected failure,  if things continue to go like this.”

The two parties stressed, according to the statement, the importance of “establishing a new political contract that leads to building a successful state in which the constitution is applied, laws are respected and balance is taken into account,” stressing that “this requires consensus between statesmen who understand these risks and respect their obligations . ”

According to the statement, “the two parties pledged to continue consultations to achieve these goals.”