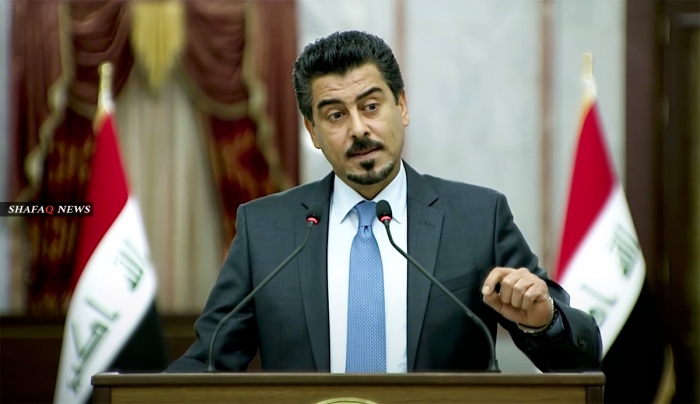 Shafaq News / On Wednesday, Ahmed Mulla Talal, spokesman for Prime Minister Mustafa Al-Kazemi, issued an explanation of the statements he made during his weekly conference regarding the borrowing law and securing the salaries of employees.

Mulla Talal said on his Twitter account that the decline in state revenues in the past several months is not sufficient to pay its salaries and other urgent obligations. On this basis, the government requested from Parliament additional borrowing authority to fill the financing gap until the 2021 budget presentation.

“The 2021 budget will be a reform budget par excellence and based on the requirements of the white paper, and measures will be taken directly aimed at improving state revenues and controlling expenditures,” he added.

Earlier, the head of the Parliamentary Finance Committee, Haitham al-Jubouri, addressed Prime Minister Mustafa Al-Kazemi to dispense with the legislation of the fiscal deficit financing law (the borrowing law).

Al-Jubouri said in an official letter addressed to Al-Kazemi, which was reviewed by Shafaq News Agency, commenting on the statement of the government spokesman, Ahmed Mulla Talal, at the press conference yesterday, Tuesday, in which he indicated that there are solutions at the Ministry of Finance to provide cash liquidity to secure salaries in the event that a project is not voted The Fiscal Deficit Law, “Please indicate your opinion regarding dispensing with the legislation of the fiscal deficit financing law in order to focus on the desired economic reforms.”

Al-Jubouri attributed his demand to cancel the law to “the existence of the possibility to cover salaries without the need to legislate the deficit financing law, and to impose new financial burdens on the state that cast a shadow over the economic situation.”

Yesterday, Tuesday, the Iraqi government ruled out that parliament would reject the borrowing law, and it might even reduce the proportion of borrowing to finance the country’s budget deficit.

This came according to the spokesman for the Prime Minister, Ahmed Mulla Talal, in response to the Shafaq News Agency’s question in a press conference following the government’s weekly.

Our correspondent asked, “What is the government’s plan to finance the deficit if Parliament refuses to pass the borrowing bill?”

Mulla Talal replied, “I asked the same question to the Minister of Finance (Ali Allawi) during the European tour, as the minister expected Parliament to reduce the lending rate” and not reject the project entirely.

He pointed out that “the government is able to secure the salaries of employees,” adding that “doubling that of private revenues is very important, and that the percentage of dependence on oil is very large, and this is a mistake.”