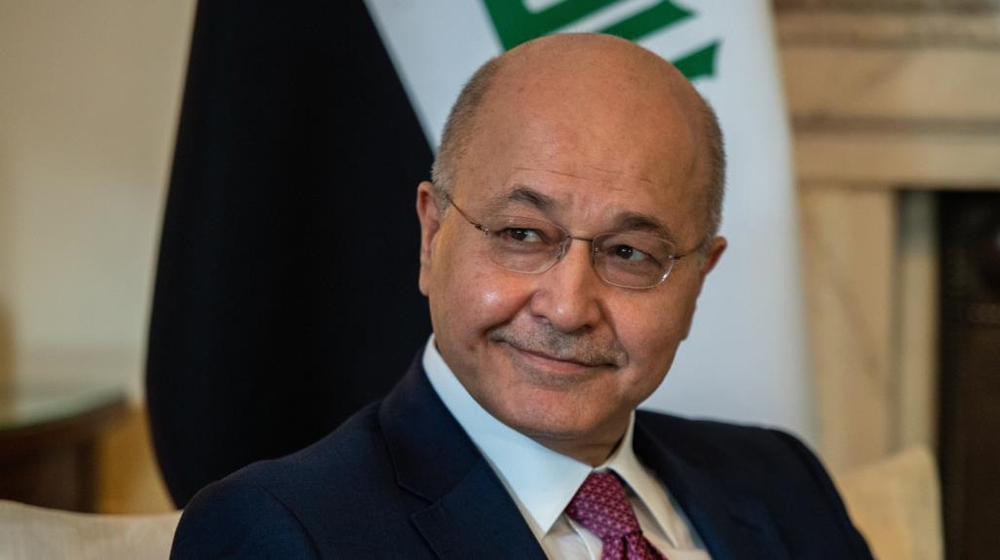 Shafaq News / An informed source revealed, on Sunday, that the President of the Republic, Barham Salih, will meet with the three presidencies of Kurdistan Region to discuss seven files.

The source said, to Shafaq News Agency, that Saleh will chair, on Monday, a meeting in Erbil that includes the three presidencies of the Kurdistan Region (the presidency of the region, the government and parliament).

He explained that Saleh will discuss with the three presidencies “the elections and the health situation in light of the Corona pandemic, the Sinjar Agreement, employee salaries, the problems of the region, Baghdad, the status of Kirkuk and the 2021 budget.”

The source pointed out that “Saleh will also receive the Kurdish leader Masoud Barzan in Erbil.”

On Sunday, Prime Minister Mustafa Al-Kazemi chaired a meeting that included a number of ministers and government officials, to discuss remedies for unemployment and secure job opportunities for the youth, as well as developments in the general situation.

A statement issued by Al-Kazemi’s office, which “People” received a copy of (October 11, 2020) stated that the latter affirmed “the government’s determination to find effective solutions to the current crises, and its emphasis on the importance of confronting all financial, economic and epidemiological challenges in a way that secures Iraq overcoming these crises, and turning them into points.” Anchor for reform and development. ”

Al-Kazemi added, “The solutions must be realistic, practical and applicable, as previous poor planning has accumulated what has burdened the state apparatus with major problems that need treatments and continuous work to change the wrong situation that the state is currently working on.”

The meeting witnessed – according to the statement – “a number of proposals related to loans and job creation in the private sector were put forward. The youth employment project and ways to provide support for this vital segment were discussed, in addition to the reforms in the white paper.”

The statement indicated the presence of “the ministers of oil, finance, planning, and higher education, the governor of the Central Bank, the President of the Federal Service Council, as well as the Director of the Office of the Prime Minister and the Secretary General of the Council of Ministers.”

The parliamentary legal committee meets with the blocks tomorrow, Monday, regarding the distribution of electoral districts.

The committee said today that it “decided to address the parliamentary blocs for the purpose of holding an expanded meeting tomorrow, Monday, to hear their proposals regarding the distribution of electoral districts.”

She added, “The meeting, which was held at the headquarters of the committee, in the presence of a number of representatives of different parliamentary committees, discussed the mechanism of distributing electoral districts and the number of districts in each governorate, and the committee listened to the opinions and proposals of the women and representatives, stressing the need to continue discussions on the subject until coming up with a final formula that meets the aspiration of the Iraqi street.

Iraqi Foreign Minister Fouad Hussein arrived at Cairo International Airport this evening, Sunday, on a visit to the country, during which he will meet with Ambassador Sameh Shoukry, Minister of Foreign Affairs, and a number of officials to discuss common issues and developments in the region and the Arab arena .

Informed sources at Cairo Airport said that the Iraqi foreign minister and his accompanying delegation arrived on a private plane coming from Iraq, and their arrival procedures were completed through the VIP lounge at Cairo airport .

Iraqi media reported that the Iraqi foreign minister will meet in Cairo, Ambassador Sameh Shoukry, and his Jordanian counterpart, Ayman Safadi, on Tuesday, to complete the agreements signed by the leaders of the three countries at their last meeting in the Jordanian capital, Amman, last August .

A number of officials will also meet in Cairo, during his visit to coordinate the holding of the Iraqi-Egyptian Committee in Baghdad soon, and the delegation will also meet with the Secretary-General of the League of Arab States, Ahmed Aboul Gheit, to discuss the latest developments in the Arab arena .

Shafaq News / A source in the Iraqi Central Bank branch in Erbil said on Sunday that the federal government has transferred an amount of 320 billion dinars to its balance to finance the salaries of employees and workers in the public sector in the Kurdistan Region.

The source told Shafaq News that the order has been issued to transfer the amount, and that it will arrive tomorrow, Monday, to the Erbil branch, and after tomorrow, Tuesday, the distribution of salaries will begin.

According to a schedule issued by the Ministry of Finance and Economy in the region, the ministry will begin disbursing salaries to the Ministry of Health and ends with retired civilians and military personnel.

Shafaq News / On Sunday, an official security source said that there was an intense security presence at the launch sites of “Katyusha” missiles targeting Baghdad International Airport  and the Green Zone in the Iraqi capital.

The source said, to Shafaq News Agency, that ” security forces have deployed in all empty squares from which missiles targeting the Green Zone and Baghdad International Airport are launched,” indicating that “the deployment is throughout the capital and its outskirts.”

Usually, missile attacks target military bases and the vicinity of Baghdad airport, where there are soldiers from the international coalition , as well as the US embassy in the Green Zone in the center of the Iraqi capital.

Baghdad International Airport includes two civilian and military parts, and American forces are present alongside Iraqi forces in the military part of the airport, which has been under repeated bombardment recently .

Washington accuses armed Iraqi factions linked to Iran of being behind the attacks targeting its embassy and military bases in which American soldiers are deployed in Iraq .

The Finance Committee in the House of Representatives held, on Sunday, two separate meetings on financing the financial deficit, ways to get out of the economic crisis, and securing the salaries of employees and retirees.

The committee stated in a statement, that it “held a meeting headed by Deputy Muthanna Al-Samarrai, Vice Chairman and in the presence of the committee members, a meeting in which it discussed a number of issues on its agenda, most notably the salary crisis and the financial deficit financing law.”

The statement added that “the committee confirmed during the meeting held at its headquarters that the issue of securing the salaries of state employees falls within the responsibility of the government and its obligations before the citizens, and the role of Parliament in general and the Finance Committee in particular is to legislate laws that enable the government to fulfill those obligations.”

He continued, “The Financial Committee made it clear that it had submitted many proposals and opinions that would bring the country out of the economic crisis that afflicts it by maximizing the state’s non-oil revenues, as well as sparing the country from the negative effects of the borrowing policy that the burdens of future generations may bear.” “The committee discussed the law on financing the fiscal deficit that came because of the delay in approving the draft federal budget law for the year 2020 and the continuation of oil prices at low levels.”

The Financial Committee announced, in a separate statement, that it “discussed with the governor of the Central Bank ways to get out of the economic crisis and secure the salaries of employees.”

The statement added, “The committee is headed by Deputy Muthanna al-Samarrai, Deputy Chairman of the Committee, and in the presence of Deputy Muhammad al-Darraji, it hosted the Governor of the Central Bank, Mustafa Ghaleb Mukhaif, and the advanced staff in the bank.”

The meeting discussed, according to the statement, “the repercussions of the economic crisis that the country is going through and ways to get out of it without affecting the livelihood of citizens and the salaries of employees.”

And the committee directed, “a number of questions regarding the monetary policy followed by the central bank, as well as the implications of borrowing policy on financial cash and the implications for the Iraqi economy.”

At the end of the meeting, Mr. Fattouh expressed his happiness with this meeting and his keenness to repeat it in order to perpetuate the fraternal and professional relations between the International Development Bank and the Union.

The Parliamentary Finance Committee announced today, Sunday, that the Iraqi government has sent an amount of 320 billion dinars for the benefit of the Kurdistan Regional Government.

A member of the committee, Ahmed Haji, said in a press statement, “The Iraqi government has sent an amount of 320 billion dinars previously agreed upon to distribute the salaries of employees in the region.”

“The Ministry of Finance has completed all its preparations for the distribution of salaries with the arrival of 320 billion dinars from Baghdad,” said the spokesman for the Kurdistan Regional Government, Jotiar Adel.

The Iraqi Federal Government and the Kurdistan Regional Government had agreed on (August 15, 2020) to finance the region at an amount of 320 billion dinars per month for the months of August, September and October, and to unify the procedures of the air, sea and land border crossings.

It stipulates that in the coming years an agreement will be made to set an amount of a fair percentage from the federal budget for the Kurdistan region through the introduction of constitutional standards, population ratios, and Kurdistan region’s imports (oil and non-oil) in the previous year.

The agreement document, which will be in effect until the approval of the federal general budget for the year 2021, stipulates that within 35 days of this agreement, an agreement will be concluded on a mechanism for the payment and scheduling of the payment of the TBI’s debts owed to the Kurdistan region, and also the treatment of previous Kurdistan debts, provided that the region does not object to providing all Information required to develop an action plan to be addressed.

Regarding the issue of auditing the accounts, the agreement provides for the formation of a joint committee from the Office of Financial and Federal Supervision and the region to deal with the issue of accounts resulting from the two parties and agree on methods of settling accounts between the federal government and the Kurdistan Regional Government and from the accounts of the year 2014 until 2020, and the region provides all the information requested by the government Federal.

Shafaq News / On Sunday, the federal government sent the fiscal deficit financing law to the Iraqi parliament for a vote during the upcoming legislative sessions.

Shafaq News Agency publishes the text of the law below: