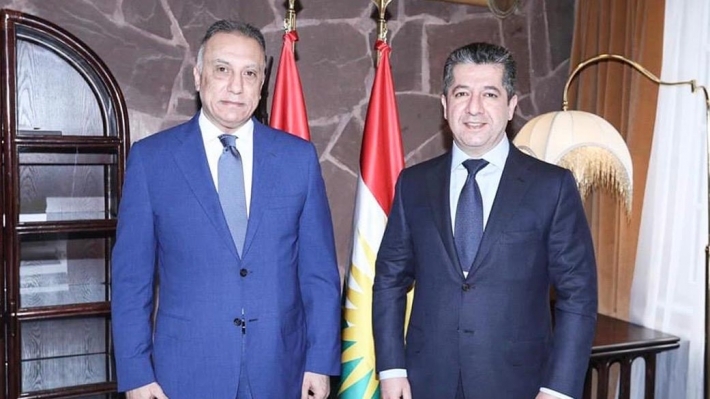 Baghdad – Mawazine News
, the Secretary of the Council of Ministers of the Kurdistan region confirmed, on Sunday, that the issue of the 2021 budget was discussed with the Iraqi ministers of finance and oil, and that another round of talks is scheduled to start next week.
Amang Rahim said, according to Kurdish media, that “on the sidelines of our visit to Washington, we discussed the Iraqi budget for 2021 in general, especially the budget and share of the Kurdistan region.”
He added, “On the issue of the budget and energy, another round of negotiations between Erbil and Baghdad will begin next week,” noting that “the agreement that took place between the Kurdistan Regional Government and Baghdad on August 15 made it easier for both sides to solve many of the outstanding issues, so next week a round will start.” Another of the dialogues between Erbil and Baghdad on the budget, oil and energy. ”Ended 29 / h

Shafaq News / A member of the political bureau of the National Wisdom Movement revealed on Sunday the possibility of canceling the tripartite summit between Iraq, Jordan and Egypt due to the registration of injuries among an Iraqi delegation in Amman.

Fadi Al-Shammari said in a tweet on Twitter, that confirmed information talks about the possibility of canceling the tripartite summit in Jordan and postponing the visit of Prime Minister Mustafa Al-Kazemi.

A tripartite summit is scheduled to be held later this week between Al-Kazemi, King Abdullah of Jordan and Egyptian President Abdel Fattah El-Sisi in Amman.

Mubasher: The Iraqi Ministry of Finance confirmed today, Sunday, that it will implement automation and simplify customs procedures as part of the government’s program to reform the economy and diversify revenues.

The ministry stated in a statement, “Some media outlets and social media sites have transmitted misleading information about (automating customs) with strange news that contradicts the facts and deliberately offends the ministry and its work.

The Iraqi Finance added, “The ministry deals with professionalism and transparency and in accordance with the law and would like to inform the public opinion of the facts, not by launching arbitrary charges, far from reality.”

She noted that “the measures come within the white paper prepared by the government, which includes economic, financial and administrative reforms, plans and strategies to meet the challenges facing the country.”

The ministry affirmed that “the automation procedures and the selection of companies are carried out in a transparent manner, in accordance with the laws and instructions, and in coordination with the General Secretariat of the Council of Ministers and the Ministry also in continuous dialogue with the World Bank and with sister Arab countries to benefit from their successful experience in customs automation.”

And the Iraqi Finance continued in its statement that it will not issue any tender in this area without full transparency and preparation of a fair atmosphere and space for all. Therefore, we ask the fair Iraqi Supreme Judicial Council to take all legal measures against anyone who misleads facts and throws false accusations and tries through that. Defamation of everyone who does transparent, clear and careful work through his workplace. ”

The ministry affirmed its respect and appreciation for the supervisory authority for the media and for freedom of expression and opinion, and at the same time it warns everyone who manipulates the facts and misleads public opinion, and reserves the right to prosecute anyone who falsifies the truth.

The Parliamentary Finance Committee confirmed that the dialogues between the Kurdistan Regional Government and the federal government will take place in two stages.

Committee member Shirwan Mirza said that the dialogues between the Kurdistan Regional Government and the federal government will start soon and will be in two stages.

He explained: The second phase will be Dialogues about the draft federal budget law for 2021, as the federal government has now begun the stage of preparing the budget, and the share of the Kurdistan region must be deducted from the budget and its legal obligations, indicating the need to reach a comprehensive agreement that permanently ends the outstanding financial problems.

This was Amanj Rahim, Secretary of the Council of Ministers in the Kurdistan region, said: It is scheduled to start meetings between the Kurdistan Regional Government and the federal government during the next week to complete the previous meetings and work to reach a strong agreement regarding the oil and financial obligations of the region to ensure the rights and the region’s share of the federal budget within a draft law Budget for the next year 2021.

Al-Furat News: Baghdad} Al-Rasheed Bank announced today, Sunday, the completion of (1041) records for the advances of resident employees whose salaries are at the bank, and work is underway to complete all transactions as soon as possible, noting that the departments concerned are antiquities and heritage

Iraqi Board of Medical Specializations

Badia of the monastery

Irrigation and trenching of Nineveh

The Ministry of the Interior announced that Basra Police had implemented a major security campaign to pursue suspects wanted for justice throughout the province.

A spokesman for the Ministry of Interior, Major General Khaled Al-Muhanna, said in a statement that, “According to the directives of the respected Minister of Interior, Othman Al-Ghanmi, a large security force has implemented for the past three days, under supervision and field follow-up by the Basra Provincial Police Commander, Major General Abbas Naji Adam, to implement arrest warrants against wanted persons in all parts of the country.” Governorate”.

He explained that the operations resulted in “the arrest of two defendants who are wanted judicially in accordance with Article 4 of the Anti-Terrorism Law, and the arrest of 304 defendants who are wanted by court according to various criminal articles. Also 12 Kalashnikov rifles, 1 RBK rifle, 2 GC rifles and various equipment were seized.” And 3 pistols. Narcotic substances, drug abuse devices and narcotic pills were seized and referred to the judiciary to receive their fair penalty for the province. ”

“The security outcome of the emergency police regiments and the emergency police detachments also included the seizure of (1,985) wheels and (1,481) motorcycles, in violation of the rules and instructions of the Traffic Directorate, and this operation comes as part of continuous inspection campaigns aimed at establishing security and stability in the governorate.

He stressed that “the Basra province police is proceeding with law enforcement operations to reassure the citizen of the presence of security forces capable of maintaining security and striking with an iron hand for anyone who is tempted to tamper with the security and stability of the province.”

The Prime Minister visited Basra yesterday evening to find out the developments in the situation there after the escalation of assassinations against activists.

Al-Kazemi stressed during his meeting with the security and military leaders at Basra Operations Command headquarters that “our presence in Basra is exceptional, because Basra is important to us and we do not accept failures to protect its security,” noting that “outlaw groups have been trying for some time to intimidate the people of Basra, and they constitute a threat. For them and for all Iraqis. ”

He added, “You must work with all means to provide security for the people of Basra, and there are criminals who commit assassinations, but we have not seen an action equivalent to the seriousness of this crime.”

He pointed out that “loose weapons and tribal problems are unacceptable, and there must be proactive action, as transgression, lawbreaking and crime cannot be dealt with in passing.”

He noted that “the failures that occurred must be avoided, and the recent assassinations constitute a breach that we cannot tolerate.”

He stated that “there is no place for the fearful within the security services, and there is no room for fear for those who work for Iraq,” stressing that “whoever makes mistakes and who fails will not remain in his place, and he will be held accountable in accordance with disciplinary laws.”

He stressed that he “does not accept any leader who fails his work, and what happened in Basra must be a lesson and a lesson,” calling on the security forces to “uncover the criminals as soon as possible.”

He indicated, “His rejection of any form of political interference in the security work.”

On Sunday, a security source revealed the place where the US forces left after their withdrawal from the Taji military base, north of the capital, Baghdad .

The source said, “The American and coalition forces that left Al-Taji camp today went towards Ain Al-Assad base in Anbar Governorate .”

He added that “the retreating forces will be stationed at Ain Al-Assad base until they completely withdraw from Iraq towards the United States of America,” noting that “no specific timetable has been set for the withdrawal from Ain Al-Assad base .”

And the Joint Operations Command announced that it had received the 8th position in Camp Taji from the international coalition forces.

ERBIL — The governments of Kurdistan Region and Iraq will embark on a new round of negotiations over their prolonged oil and budgetary disputes, said Kurdistan Region’s secretary of council of Ministers.

Amanj Rahim, who was a member of Kurdistan delegation accompanying Iraqi PM Mustafa al-Kadhimi during his visit to Washington earlier this week, told BasNews that last week’s phone conversation between PM Masrour Barzani and his Iraqi counterpart has been helpful in leading the sides towards a solution.

He revealed that the KRG delegation will mainly focus on Erbil’s share from the federal budget bill for the year 2021, hoping to reach a concrete agreement that serves the interests of both the sides.

The spokesman for the International Coalition, Miles Caggins, confirmed that the coalition does not wish to remain in areas liberated from ISIS.

Caggins said in a press statement: “We have handed over 8 bases to the Iraqi forces,” adding, “We do not wish to remain in areas liberated from ISIS.”

He added, “We are confident in the capabilities of the Iraqi army and the peshmerga to confront ISIS.”

The Joint Operations Command announced today, Sunday, that it has received the No. 8 position in Camp Taji from the international coalition forces.

The spokesman for the joint operations, Major General Tahsin Al-Khafaji, said in a press statement that the International Coalition forces handed over the site No. 8 in the Taji camp to the Iraqi forces.

”Al-Khafaji explained that“ the site was used to train, equip and rehabilitate Iraqi cadres by the Australian, New Zealand and American forces, ”indicating that“ The site will be assigned to the Iraqi security forces for its use.

”He added that“ after the completion of the mission of the International Coalition Forces, Site No. 8 was handed over to the Iraqi forces in the presence of the representative of the Prime Minister, who in a session signed the receipt and handover report. ”

Regarding the handover of the rest of the sites between Al-Khafaji, there is a timetable for their delivery. .