The Parliamentary Legal Committee announced, on Tuesday, the completion of the technical and legal procedures for the election law, indicating that what remains is only political disputes.

A member of the committee, Rebwar Hadi, said to “the information” that “the legal committee continued its meetings on the election law and completed all the technical and legal procedures regarding it.”

He added that “what remains obstructs the passage of the law is the political aspect and disagreements regarding it,” noting that “the committee is awaiting the consensus of the blocks and resolving disagreements about it to be presented before the presidency to be included in the agenda for passage.”

And Hadi expected, “the blocs reached solutions about the contentious points during the next few days after the representatives of the blocs continued their meetings on the law.” 25 and ended 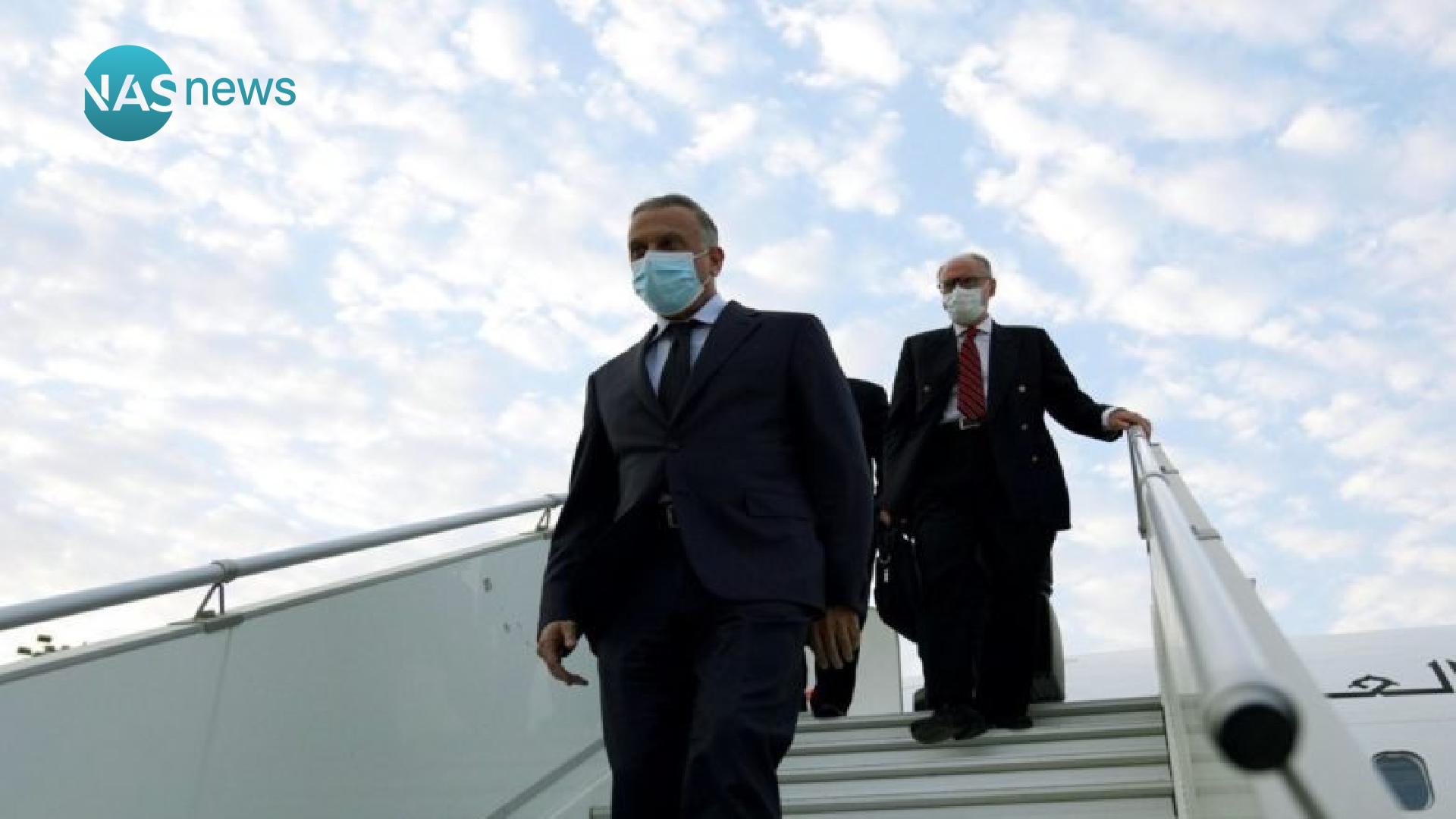 According to the delegation, tomorrow morning (Baghdad time) will witness a series of meetings that will focus on the economic side, including a meeting with a large number of major companies and economic institutions on the reconstruction of Iraq.

Officials in the delegation say that contracts will be signed with major companies at the level of gas, oil and electricity, in the presence of the ministers of oil, electricity and finance.

Al-Kazemi will also hold a session with American economic institutions, and start the second round of the strategic dialogue between Iraq and the United States, the first of which took place via videoconference on June 12.

Al-Kazemi is also holding a meeting with a number of American research centers.

The Iraqi delegation received a reception that was described as ‘exceptional’, as a large number of streets in the American capital were closed.

The leader of the State of Law coalition, Nouri Al-Maliki, played down the importance of Prime Minister Mustafa Al-Kazemi’s visit to the United States, refusing to describe it as historic.

Al-Kazemi went to Washington DC (August 18, 2020), where he is scheduled to meet US President Donald Trump, in the first visit by an Iraqi prime minister in years, after Washington postponed the visit of former Prime Minister Adel Abdul Mahdi several times and then canceled it.

Al-Maliki expressed his surprise at describing the visit as historic, stressing that he also visited the United States several times.

Al-Maliki said in a televised statement for the “Game of Chairs” program, which was followed by “People” in its colloquial language, “What follows when I am visiting a historic one? What is my opening?”

He continued, “Is this the first time that we visit America? Did I not visit the United States four or five times? .. The world’s convictions and strategic visions do not move through a visit, especially as we witness the American role that is intended to be in Iraq.”

During his two terms between 2006 and 2014, Al-Maliki made several visits to the United States, including his controversial visit in 2011, when he accompanied US President Barack Obama, Al-Maliki to a cemetery for the dead American soldiers in Iraq, and placed a wreath of flowers on a memorial that commemorates them.

And he indicated, “We need American experts but not combat forces, and in return I bought a Russian weapon, and this means that we need Russian experts, and at some point the number of Russian experts reached 29 thousand, and as long as we have an American weapon, there must be experts and technicians, and now there is.” F-16s and Abrams tanks are out of service due to the lack of American experts. ”

Prime Minister Mustafa Al-Kazemi arrived in Washington, on Wednesday, on an official visit.

The Prime Minister’s Office said in a brief statement received by Al-Akhbariya that Prime Minister Mustafa Al-Kazemi had arrived in the United States of America.

It is noteworthy that the Prime Minister, Mustafa Al-Kazemi, left the capital, Baghdad, on Tuesday, heading to the United States of America, at the head of a government delegation, in response to an official invitation.

The media office of the prime minister said in a statement received by Al-Akhbariya that “Al-Kazemi will meet with US President Donald Trump, next Thursday,” noting that “Al-Kazemi will hold talks during the meeting on strengthening bilateral relations between Baghdad and Washington, in addition to discussing current developments in the regional arena. And discuss issues of common interest.

SULAIMANI — Kurdistan Regional Government (KRG) Representative to Baghdad Fars Issa said on Monday (August 17) that a number of KRG officials will accompany Prime Minister Mustafa al-Kadhimi during his visit to Washington this week.

Specifically, Head of the Kurdistan Region Presidency Divan Fawzi Hariri, Secretary of the KRG Council of Ministers Amanj Rahim, KRG Representative to US Bayan Sami Abdul Rahman, and a representative from the Ministry for Peshmerga Affairs will be on hand in Washington, Issa said in a statement.

Al-Kadhimi is slated to arrive in Washington on Wednesday to meet with US President Donald Trump and other senior officials.

On Sunday evening, Minister of Foreign Affairs Fuad Hussein headed to Washington in advance of the arrival of his boss.

Al-Kaabi criticized the agreement. He said in a statement that Baghdad will hand over the salary funds to the region “without auditing the financial control and handing over the oil revenues and other revenues collected in the region to the Federal Ministry of Finance.”

Hawrami said in a statement received by Shafaq News, “The principles of the constitution are the basis for addressing any outstanding problems between the Kurdistan Regional Government and the federal government, which has not fully paid the region’s financial dues for many months, which has placed many heavy burdens on our citizens in the region, while ignoring the principle Justice, equality and the public interest. ”

He explained, “The recent agreement between Erbil and Baghdad, although it is temporary, paves the ground for a long-term agreement within the framework of the constitution, which is something that everyone should support, not fight, and stressed that the agreement included unifying procedures for border crossings, customs and other points that Baghdad raised during Conversations. ”

The deputy speaker of the region’s parliament indicated that “sending 320 billion dinars per month is less than what Baghdad used to send, and that the aforementioned amount is for three months, and this amount has been allocated according to data that the 2020 budget has not yet been approved, which is a number based, according to the agreement, on “Estimates of the federal government for the salaries paid by the region to those who earn them, with the estimates on oil and non-oil imports.”

Hawrami added, “Al-Kaabi asked about auditing financial control, while the two sides’ agreement requires the formation of a joint committee consisting of the Office of Financial and Federal Supervision and the region to handle the accounts and agree on methods of settlement from the accounts for the year 2014 to 2020, provided that the region provides all the information that Baghdad requested.” .

Hayman Hawrami pointed out that “the region has not rejected any mechanism for auditing and controlling revenues according to the constitution,” calling for “the necessity not to mislead public opinion and try to overturn the facts and conceal the fact that employees’ entitlements have not been paid in the Kurdistan Region four months ago, which is one of the constitutional duties of the federal government.”

The Deputy Speaker of the Kurdistan Parliament called for “serious and fruitful cooperation to reach a balanced and fair agreement on the basis of the constitution, and put an end to dealing with the Kurdistan Region on the basis of national discrimination,” and he also called on everyone to review the points of agreement well before making positions far from the facts.

He continued, “At a time when the governorates are witnessing a waste of public money and the preoccupation of some of their officials is (stationery) with a million spending, the employees, retirees, and the families of the martyrs of the region have suffered months and lived without salaries, and their livelihoods were cut off under the weight of a dangerous health condition that is not different from what the governorate witnesses. Dhi Qar from the hardship of living to the extent that its honorable people took to the streets and are still protesting in order to recover their money and live in dignity.

The Central Bank of Iraq called, Tuesday (August 18, 2020), all citizens to deal with banks and financial intermediation companies approved by it, during large cash exchanges, instead of hoarding in homes.

The Central Bank said in a statement received (Baghdad today), that it “seeks through this, to preserve the money mass of citizens, avoid cases of theft and fraud, and promote counterfeit currencies.”

The bank stressed in its statement, “the need to reduce trade exchange in paper currencies, which medical studies have proven to be an effective vector for viruses and bacteria, especially as the country is going through a crisis of a pandemic.”

The statement continued, “The Central Bank has adopted the mechanisms of spreading financial inclusion in Iraq, which enhances the banking culture and the shift to monetary exchange with modern financial technologies during all forms of banking transactions.”

Hassan Karim Al-Kaabi, First Deputy Speaker of Parliament, called on the Kurdistan region to hand over oil revenues against the backdrop of Baghdad’s spending of 320 billion dinars to the region.

According to a statement received by Al-Akhbariya, Al-Kaabi called on the Council of Ministers to assume legal and moral responsibility towards the people in accordance with the principle of justice, equality and the public interest of the state, while he called on the Kurdistan Regional Government to end the file of handing over its revenues to Baghdad, considering that this file imposes many heavy burdens on the Baghdad government and our people in Territory. ”

Al-Kaabi stressed that “the 2019 budget passed through exceptional circumstances, as discussions were held between the federal government and the Kurdistan Regional Government aimed at concluding a final agreement with the regional government to reach a final solution related to the delivery of oil exported from the region to Baghdad.”

Al-Kaabi asked, “In any right or legal cover, the monthly sums are delivered to the Kurdistan government without auditing the financial control, and the oil revenues and other revenues collected in the region are handed over to the Federal Ministry of Finance after the end of the 2019 budget law on December 31, 2019.”

“The Council of Ministers, in one of its previous sessions, issued a decision to grant the Ministry of Health and the afflicted Dhi Qar Governorate an amount of 50 billion dinars to fill the shortfall in the needs of facing Corona and the urgent requirements of the Iraqi people, but the lack of cash led to the lack of funding The Ministry of Health and Dhi Qar, wondering how to spend 320 billion dinars for the regional government in light of these critical conditions that our governorates suffer from, which reach the point of not allocating funds that cover even stationery expenses in their departments.

{Baghdad: Al Furat News} The Rasheed Bank announced today, Tuesday, that the salaries of state departments’ employees have verified their balances with the bank and those holding the Nakheel card.

The media office of the bank said in a statement received by {Al Furat News} that “employees can receive their dues from bank branches and electronic payment outlets in Baghdad and the provinces.”