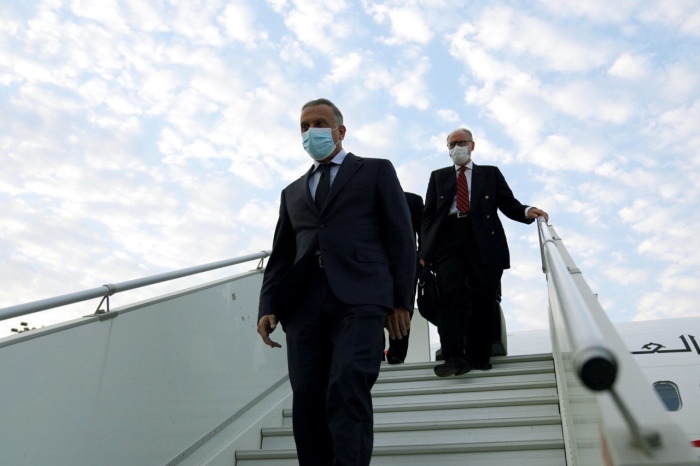 Shafaq News / Gabriel Saouma, a member of the advisory board of US President Donald Trump, revealed, on Sunday, the most important files that will be discussed by Iraqi Prime Minister Mustafa Al-Kazemi at the White House and said that the most prominent of them is the Iranian interference and the targeting of the embassy building and the protest movement in Iraq.

In an interview with Shafaq News Agency, Souma added, “The main task of Al-Kazemi’s visit to Washington is to strengthen bilateral relations in various fields, including security, economy, energy, health care and responding to the Corona pandemic,” noting that “the meeting will witness discussion of the protest movement in Iraq.”

He explained that “Al-Kazemi’s meeting with Trump will witness discussion of the issue of Iranian interference in Iraqi affairs, as Iran is working to expel the United States from Iraq,” noting that “the meeting will discuss kidnappings and assassinations in Iraq, the most prominent of which is the assassination of the security expert Hisham Al-Hashemi.”

“The meeting will also discuss the decline in oil prices and their impact on the Iraqi economy, especially since the Iraqi government is in a critical stage and cannot pay the salaries of employees continuously,” said Souma.

“Trump will discuss with Al-Kazemi the responsibility to protect the security of the embassy after the building was exposed late last year and recently to dozens of missiles,” the US president’s advisor said, adding that “the Iraqi army is unable to protect the embassy building, its employees, and the country’s military bases.”

“The United States was forced to use the” Patriot “system to protect the embassy building and employees from terrorist attacks, Saouma said, stressing that Washington respects the sovereignty and the Iraqi constitution and that it does not need Iraqi oil.

Trump’s advisor pointed out that “withdrawing American forces from Iraqi lands is not possible, but the reduction of numbers will be according to agreements and joint work between the Iraqi and American governments.”

Yesterday, Saturday, the media office of the Iraqi Prime Minister, Mustafa Al-Kazemi, announced the files that the latter will discuss with US President Donald Trump in Washington during his upcoming visit.

Al-Kazemi’s office said in a statement received by Shafaq News, “The latter will start, next week, an official visit to the United States of America, at the head of a government delegation, based on an official invitation.” He explained that he would meet US President Donald Trump on the twentieth of this month.

According to the statement, the visit will include “discussing the files of bilateral relations between Iraq and the United States of America, issues of common concern, joint cooperation in the fields of security, energy, health, economy and investment, and ways to enhance them,” in addition to the file to address the Corona pandemic, and bilateral cooperation in a way that serves the common interests of the two countries.