Skip to content
HomeBarzani’s party: We will not turn the opposition of political blocs against Fouad Hussein into a political crisis 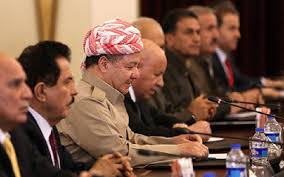 Member of the Kurdistan Democratic Party, Abdul Salam Al-Barwari, confirmed today, Sunday, that his party did not insist on the nomination of Fouad Hussein to the Ministry of Foreign Affairs, indicating that the political blocs turned into an anomaly after the political forces abandoned Prime Minister Mustafa Al-Kazemi.

Al-Barwari said in a statement to “Al-Ikhbaria” that “the political situation in Iraq has become an anomaly after the major political blocs abandoned Prime Minister Mustafa Al-Kazemi.”

He added, “The KDP will not turn the opposition of political blocs against our candidate for the Ministry of Foreign Affairs Fouad Hussein into a political crisis and will choose another figure.”

He explained that “political talks are still ongoing to resolve the selection of the remaining Kurdish ministers,” noting that “the Kurdish forces are interested in resolving political differences.”