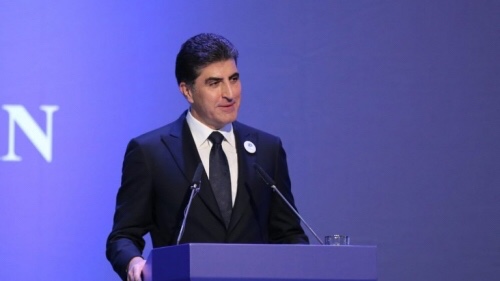 Kurdistan Region President, Nechirvan Barzani, confirmed on Thursday that what is happening in Iraq directly affects the situation in the region, noting that what happened in the Iraqi parliament regarding the removal of foreign forces was an inappropriate decision.

Barzani said during his participation in a dialogue session at the Davos Economic Conference, today, Thursday, that “we will not be able in any way to distance ourselves from what is happening in Iraq, and what is happening in Baghdad directly affects the situation in the Kurdistan region.”

He added, “The Iraqi people deserve a better life and situation, and through the demonstrations they have succeeded in conveying their demands to the authorities, and we must feel the responsibility.”

On the parliament’s decision for foreign forces to leave Iraq, Barzani added, “What happened in the Iraqi parliament was inappropriate, two main components in Iraq [Sunnis and Kurds] who did not support the decision.”

He explained, that Iraq still needs international and American support, because the emergence of ISIS and terrorism again is a serious matter, and in our view, the elimination of terrorism cannot take place without the support of the international community and America, so it is important for the American forces to remain in Iraq.