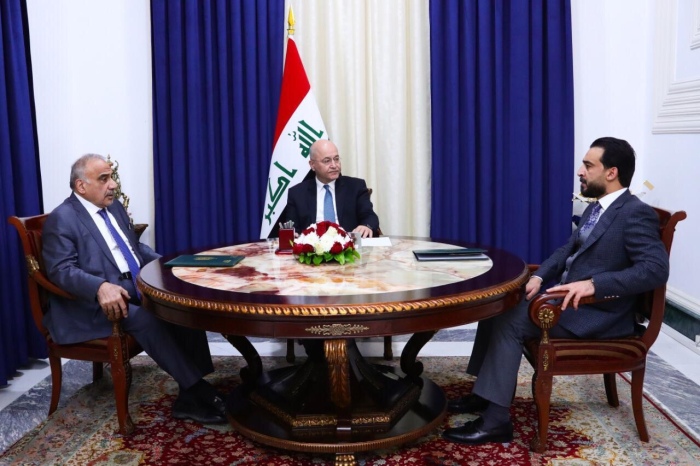 An Arab newspaper revealed today, Friday, that there are major differences between the three presidencies represented in Parliament, the resigned government and the Republic, regarding the issue of removing American forces from Iraq these days.

The newspaper said, in a report, quoting a high-ranking official source at the Presidency Court: The issue of removing the American military forces is strongly insisted upon by the resigned Prime Minister Adel Abdul-Mahdi and other political forces loyal to Iran, indicating that Parliament Speaker Muhammad Al-Halbousi and Republic Barham Saleh told Abed Al-Mahdi rejected them as a step to remove American forces from Iraq.

She explained: Parliament and Republican Presidents cautioned Abdul Mahdi that the decision would drag the country into major problems, which may not end when the United States or Western countries lift their support for Iraq, or unilateral sanctions by Washington, as US President Donald Trump has threatened.

She noted that “Washington has become aware that the Presidents of Parliament and the Republic reject the project, especially since Al-Halbousi and Saleh have made phone calls to American officials, and the position of Iraqi officials represents, in the end, for the Americans a Sunni Arab and Kurdish position.”

While she stressed, according to the responsible source: “There is a Sunni-Kurdish fear that the departure of the American forces will be at the expense of a greater Iranian influence and an outreach to the militias in Iraq, considering that the American presence is a current equilibrium factor, even if not significantly”, indicating that “this matter Al-Halbousi informed him and Saleh Prime Minister Abdel-Mahdi during the meeting of the three presidencies, which was held last Tuesday.