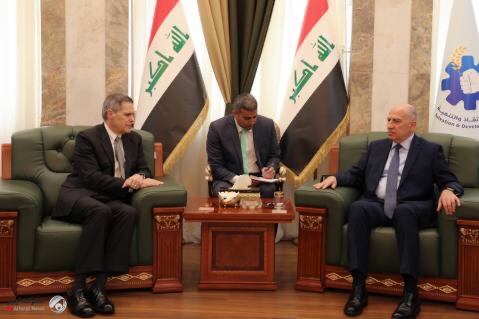 (Baghdad: Al Furat News) The American ambassador in Baghdad, Matthew Toller, warned of what he described as “catastrophic results” if Iraq insisted on proceeding with the decision to withdraw American forces from the country.

This came during a meeting with the President of the Salvation and Development Front, Osama Al-Nujaifi today, Wednesday, Matthew Tooler, during which they discussed “relations between Iraq and the United States, developments in the political situation, and the popular movement and its reflection on the will of the Iraqi people and their interests.

” Al-Nujaifi stressed during the meeting, “the importance of getting Iraq out of the circle of conflict, because the Iraqi situation cannot bear it as an arena for any conflict.”

Al-Nujaifi pointed out that “the United States is a friendly country, and there are agreements concluded between it and Iraq, and any decision should come from a common interest between the two sides. Therefore, the House’s decision on removing foreign forces from Iraq is a hasty decision marred by a clear deficiency in its legal aspects, It represents a blow to national unity in the absence of basic components in a matter that concerns the interests of the country as a whole, as it sows a seed for future disputes with a negative impact on Iraq, and it expresses a dangerous trend of unilateralism in making important decisions despite the fact that the government is a daily caretaker government that is not entitled to take Decisions or recommendations on matters of vests Wagih. ”

Al-Nujaifi stressed that “hope is pinned on the success of the just demands of the peaceful demonstrators, stressing the support of the Salvation and Development Front for the popular movement, warning that the most important challenges facing the movement are the military escalation, as well as offering sectarian addresses such as talking about establishing a Sunni region, and it is clear that its aim is to stop a march Demonstrations and working to put sticks in the wheel of its movement aimed at achieving a peaceful democratic transition. ”

Al-Nujaifi also recalled the solution map drawn up by the Harmonious Front, which is consistent with the objectives of the popular movement. It is clear that the parties that led to the failure stand against the demonstrations and are working to end them in any way.

For his part, US Ambassador Matthew Toler stressed, according to the statement, “his welcome and agreement with Nujaifi’s vision, and presented his government’s position on political issues, especially on the issue of the withdrawal of American forces, stressing that his country is keen to cooperate and support Iraq and stand with its people.”

The US ambassador added that his country “does not want to take any action whose consequences could be disastrous for Iraq, and it certainly will not be in the interest of his country.”

Toler also commented on “increasing hostile activity and targeting the bases that comprise the international coalition forces by saying: It is a message designed to silence the voice of the demonstrators defending their people.”