The session will be held according to the Parliamentary Information Service at five in the evening.

Parliament is scheduled to complete voting tomorrow on the remaining paragraphs of the electoral bill. It is finished

{Baghdad: Al Furat News} The representative of Nineveh Governorate, Ahmed al-Jubouri, President of the Republic Barham Saleh advised against resigning and staying with the people.

“Now Barham Salih is committed to the people’s choice and the authority to not assign Qusay al-Suhail despite the great pressures,” Jubouri said in a tweet on Twitter.

He added, “I know, Mr. President, that those who signed as heads of the blocs of most of the deputies belonging to the candidate blocs are with the people, and the best option is to ask for their signatures and you and resign, so I stay with the people.”

A source close to the President of the Republic, Barham Salih, said that the latter waved political forces to resign.

The source stated to {Al Furat News} that “Saleh waved to the political forces his willingness to resign before appointing a candidate who did not win the acceptance of the Iraqi people.”

{Baghdad: Al Furat News} President of the Republic Barham Salih asked the Presidency of the Council of Representatives to determine the largest bloc to assign its candidate to the post of prime minister.

Saleh addressed the Presidency of the Parliament that he had three addresses in this regard, namely:

2- The Building Alliance asked for a bigger bloc and presented its candidate Qusay Al-Suhail to be appointed as prime minister.

3- The Saeron Alliance asked that it is the largest bloc and it is concerned with submitting its candidate to form the government.

The President of the Republic also noted that a request submitted by 174 deputies outlined the conditions that must be met in the candidate for the presidency of the Council of Ministers, namely that he be independent of someone who did not assume the position of minister or deputy and who are not dual nationals.

Officially Co-Hosted with the Central Bank of Iraq, IFEX showcases all the outstanding opportunities and latest technology in the country.

Come and discover an unrivalled line-up of banks, digital agencies, FinTech start-ups, tech companies and software providers alongside a 2-day VIP conference programme. All officially co-hosted with the Central Bank of Iraq.
Iraq is forecast to become the fastest growing economy in the MENA region. IFEX will shine a spotlight Iraq’s rapidly developing banking and financial services industries. New technologies are leading the charge towards greater financial inclusion. Iraq is poised to take advantage of these innovations.
Now is the time to take advantage of the outstanding growth story within Iraq’s financial services. Do not miss out and join us at IFEX, the leading banking, FinTech, Payments, E-Commerce, Retail, and Identity show in Iraq. 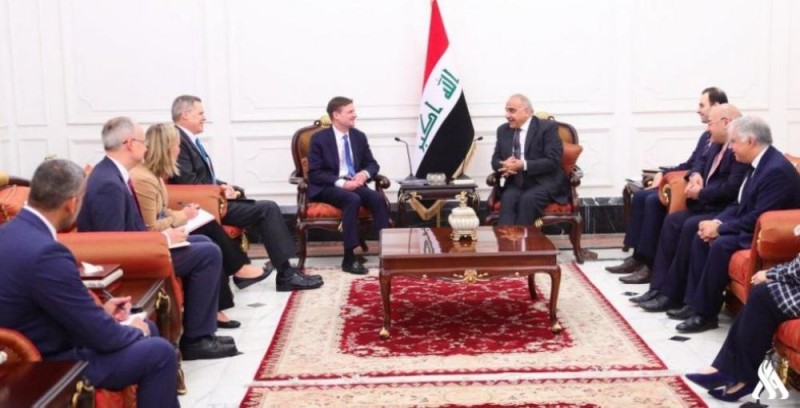 The head of the Iraqi caretaker government, Adel Abdul-Mahdi, discussed today, Thursday, with the US Undersecretary of State for Political Affairs David Hill relations of cooperation and cooperation between the two countries, and listening to Iraq’s vision about the recent developments in Iraq and the region, as well as the vision of the United States of America regarding it.

Abdel-Mahdi stressed, according to a statement of his office that he (conscious) received, of the strategic partnership, support for Iraq and its constitutional institutions, and respect for its sovereignty

Barzani’s media office said in a press release, “Tomorrow Press” received a copy of it that “Barzani received in the resort of Salah al-Din, near Erbil, the Speaker of the House of Representatives, Muhammad al-Halbousi.”

“During the meeting, which was attended by Deputy Prime Minister and Minister of Finance Fuad Hussein, political conditions, developments and recent changes in the Iraqi political process were discussed, and views were exchanged on ways to find solutions to the current crisis in Iraq and the formation of the new government.”

And, “As was done during the meeting, the file of amendments to laws in the Iraqi parliament, especially the new election law, was discussed, and the two sides stressed the need for any change to be in the interest of the country and citizens.”

He noted that “In another aspect of the meeting, the political situation in the region in general was discussed.”

{Baghdad: Al Furat News} Today, the President of the Kurdistan Region, Nechirvan Barzani, discussed with the Speaker of the House of Representatives, Muhammad Al-Halbousi, in Erbil, the latest developments on the Iraqi scene and the selection of a candidate for the Prime Minister of Iraq, to succeed Adel Abdul-Mahdi, and they agreed on “joint support for the political process And assisting the partners in choosing the next Iraqi prime minister, consistent with the will and demands of the people of Iraq. ”

The Presidency of the Kurdistan Region stated in a statement that Barzani received, before Sunday afternoon, al-Halbousi and discussed the two sides “during a meeting that was fraternal atmosphere filled with frankness, attended by Fouad Hussein, Deputy Prime Minister and Minister of Finance, the situation in Iraq and the region and the issue of forming the new cabinet of the Iraqi federal government and the draft laws currently presented On the Iraqi parliament. ”

The views of the two sides agreed during the meeting to “work together to find positive ways to solve problems in a way that meets the legitimate demands and serves all the country, people and components of Iraq,” according to the statement.

The two sides also agreed to “jointly support the political process and assist the partners in choosing the next Iraqi prime minister in accordance with the will and demands of the people of Iraq.”