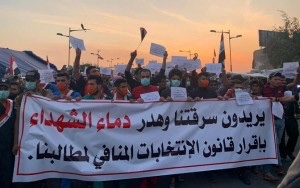 BAGHDAD / … Demonstrators continued to flock to Tahrir Square in central Baghdad on Monday, despite the rains, to continue the sit-in in the square for the 38th consecutive day to demand the identification of the killers of the demonstrators and their trial and early parliamentary elections under international supervision through the dissolution of the House of Representatives after the amendment of the law Elections and replacement of the Electoral Commission.

A source said that Tahrir Square, as well as the bridges of the Republic Al-Senk and Al-Khalani Square, witnessed the same places of concentration in the Turkish restaurant and the Al-Senak garage.

Al-Ahrar Bridge and Hafez al-Qadhi square witnessed tensions (last night) with no injuries, stressing that the security situation in these areas is good, in the morning, and there is no friction.

The demonstrators in Tahrir Square in the capital Baghdad, confirmed on Saturday, the continuation of demonstrations and sit-in in the square until the fulfillment of all their demands, pointing out that the dismissal of the government was only the first demand, which is the first victory, which was achieved thanks to the blood of the martyrs and the sacrifices and steadfastness of demonstrators and protesters throughout Iraq.

Since Friday, October 25, Baghdad and nine other provinces have witnessed widespread protests demanding the dismissal of the government, bringing the killers of the demonstrators to justice and holding early elections under international supervision. Hundreds of demonstrators and security forces were killed and injured as a result of the brutal repression. The demonstrators were subjected to it.

The religious authority in Iraq considered that this uprising is the first of the fraudulent ballot boxes in expressing the will of the people and choosing them to represent them. At any time the legitimacy of the ruler fell. Finished 2 Finished 2