At least five people were killed and 15 wounded in renewed clashes between protesters and police in eastern Baghdad on Sunday, police and medical sources said.

The clashes took place in Baghdad’s Sadr City. The new deaths add to the more than 100 deaths in violence in Iraq over the past days.

The meeting stressed the maintenance of community security and follow-up investigative procedures to identify the perpetrators of incidents of violence against demonstrators and security forces, and the importance of the rule of law and the preservation of lives and private and public property.

Attendees stressed the need to open an investigation of assaults by unknowns, which affected some media and emphasize the protection of journalists and freedom of opinion and expression guaranteed by the Constitution.

Chairman of the Parliamentary Finance Committee Haytham al-Jubouri for Marabed: We discussed today the allocation of funds for the decisions of the Council of Ministers

Prime Minister’s Advisor: A new package of decisions will be taken next Tuesday

The growing strife in Iraq is threatening to topple the government. If protests increase in intensity and scale, the government says, it could bring down the government.
There have been major unrest in Iraq’s major cities since October 1, largely in Shiite areas in the center and south of the country.
Although the demonstrations were caused by a variety of political and economic issues, they have since merged into a broad movement and taken a violent turn.
Iraqi Prime Minister Adel Abdul Mahdi said in a speech to Iraqis that there are “no magic solutions” to solve their problems, and called for more time to resolve the chronic issues in the country, most notably with regard to corruption and unemployment.
In an effort to calm public anger, Abdul Mahdi announced a new pay scheme for poor families and the dismissal of 1,000 government employees accused of corruption, among other measures.

Sistani and Sadr
The website says that these promises did not do much to calm the situation, adding that this is not surprising given that the basic problems in Iraq continue unresolved despite similar assurances during previous periods of unrest.
For his part, condemned the top Shiite cleric Grand Ayatollah Ali al-Sistani on Friday condemned the security response to the protests, and urged the prime minister to establish a committee to fight corruption.
Shi’ite cleric Moqtada al-Sadr also issued a call for the government to resign, saying the “Sairoun” bloc in parliament would stop participating in parliament until the government enters real reform, echoing his long-standing call for anti-corruption measures.
The site says the turmoil caused by economic and political concerns is not new in Iraq, but its current outbreak is characterized by many unique aspects that indicate the risks it poses to the continuity of the current government.
Different protests
He explains that the current protests differ from the economically motivated demonstrations of previous years, especially in size and scope.
These protests do not appear to have a central leader, making it more difficult to control, both by the Iraqi government and foreign actors.
Although there are signs of pro-protest social media tags that may have originated in Saudi Arabia, given the diversity of the social and political spectrum in Iraq, it is unlikely that any single external representative will be able to benefit from the current unrest.
The site stresses that these protests come at a time when the Iraqi government suffers from a special vulnerability, there is a big difference between its factions, especially among the Shiite elite, on how to respond to these protests, especially since none of the nearby solutions under consideration will not resolve chronic issues Long-term that has been aggravating for years.

Possible Expectations The
site expects that the resignation of Abdul Mahdi’s government may occur sooner or later, and that a wave of unrest may erupt as the first anniversary of his assumption of office on 25 October.
US facilities and other foreign companies, especially in the oil and gas sector, could become targets, with pro-Iranian factions in the political and security forces willing to take advantage of the unrest.
He adds that although this did not happen during the current round of protests, foreign companies were attacked during previous periods of unrest.
The PMUs can play a key role in the final outcome, but it is unlikely that the PMU will be ready to quell the protests because the majority of its members are grassroots participants.
But their links to Iran and their formal integration into the Iraqi security apparatus make the options open about their expected reactions.
The website concludes that ISIS and other jihadi groups could benefit from the current unrest, especially if Iraqi security forces focus on containing them. 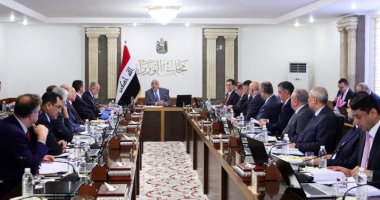 Meeting of the Iraqi Council of Ministers

Bashir Khalil Al-Haddad on Sunday chaired an expanded meeting that included the chairman and members of the parliamentary finance committee in the presence of a number of deputies from other committees, the Ministry of Finance and bank managers.
Haddad stressed the importance of the Cabinet’s approval of the House of Representatives decisions for a package of quick measures to implement the demands of the demonstrators, and called for the return of the dissolved contracts from the ministries of the Interior and Defense while securing financial allocations to return them immediately, and issuing direct orders and joining the service.
Al-Haddad also stressed the rapid disbursement of loans to restart the stalled factories to provide employment opportunities for young people, and the issuance of periodic financial grants to students graduates of preparatory, diploma and graduate degrees, and urged the federal government to take prompt and immediate action to the demands of the demonstrators and improve services in general.
Participants in the meeting appreciated the keenness of the House of Representatives and follow-up of the Presidency to activate the mechanisms of joint work, coordination and cooperation with parliamentary committees in order to provide services as soon as possible to the demonstrators and intensify efforts to address obstacles and stand a serious pause to surround this crisis.