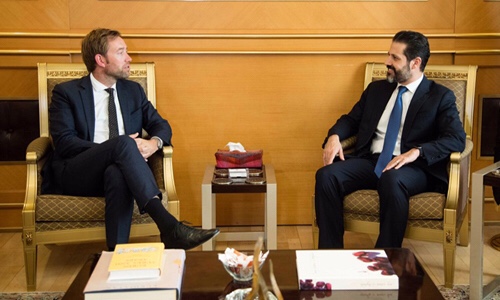 The Deputy Prime Minister of the Kurdistan Regional Government, Qubad Talabani, on Thursday, in the city of Erbil, with a delegation from the US Consulate, and a Norwegian diplomatic delegation, topics of budget, oil, security, and relations between Erbil and Baghdad.

This came during a meeting with Talabani, the two delegations separately, as the Vice President of the Kurdistan Regional Government discussed the issues of maintaining security and stability of the region after the emergence of dangers to the remnants of the remnants of the Islamic State in the border areas, stressing the importance of re-start Article 140 of the Iraqi constitution Disputed.

Another focus of the meetings included highlighting the new steps of the KRG in solving problems and improving services, as well as explaining to the visiting delegations the extension and generalization of the reform process and developments in relations between Erbil and Baghdad.

In addition to Steven Vijn, the US Consulate, the delegation included Andrew Linder, Political and Economic Affairs Officer at the Consulate. Senior Advisor to the Norwegian Embassy in Iraq.

BAGHDAD: The Prime Minister of the Kurdistan region, Masroor Barzani, that Iraq is one country from north to south.

This came during a meeting with Interior Minister Yassin Taher al-Yasiri, on Thursday, the Prime Minister of the Kurdistan region Masroor Barzani in the latter’s office in the province of Erbil.

A statement from the Ministry of Interior, received (Euphrates News) a copy, that “Yasiri conveyed the greetings of Prime Minister Adel Abdul Mahdi to the government and people of the Kurdistan region, wishing that security and peace prevail in all provinces of our beloved homeland.”

The Minister of Interior, “This visit comes within the framework of expanding the horizons of cooperation and coordination between the governments of the Center and the region,” pointing to “the importance of such visits in overcoming obstacles.”

For his part, the Prime Minister of the Kurdistan region welcomed the visit of the Minister of Interior and the delegation accompanying him, stressing his keenness to “simplify procedures for all Iraqi citizens.”

“Iraq is one country from north to south,” Masrour Barzani said, adding that “everyone is interested in preserving the integrity of its territory and achieving security and well-being for its people.”

The statement continued, “Yasiri obtained the approval of the Prime Minister in the Kurdistan region to cancel the entry fee of the region of ten thousand dinars per person.”

WASHINGTON (Reuters) – The United States does not intend to intervene in currency markets at the moment, Bloomberg quoted US Treasury Secretary Stephen Mnuchin as saying.

Mnuchin added that the situation may change in the future, but so far the Treasury is not considering any intervention.

He said it would be more effective if the US Treasury intervened in coordination with the US Federal Reserve and US allies.

The comments come at a time of year when a US-China trade war has cast a shadow over the global economy.

The head of the Kurdistan Regional Government, Masroor Barzani, met in Erbil on Thursday with World Bank Regional Director Saroj Kumar Jha, and discussed with him a number of files.

During the meeting, the World Bank’s Regional Director identified the World Bank’s representative in Iraq, Ramzi Noman, and noted that World Bank experts are ready to come to the Kurdistan Region to assist the government in financial reforms in particular.

For his part, the President of the Kurdistan Regional Government Masrour Barzani thanked the World Bank, according to a government statement issued today.

Barzani said, “We are happy to support an important institution such as the World Bank for the government program, whose main objective, and through our efforts and capabilities and with the support of our friends, to develop the economy of the Kurdistan Region and diversify its sources of income in a way that does not rely on a single source of income, and pay more attention to the sector of agriculture, industry and tourism And create a suitable platform for international and domestic investment, so that the Kurdistan Regional Government to all its citizens and without discrimination.

KRG Interior Minister Reaper Ahmed and Federal Minister of Interior Yassin al-Yassiri ended a meeting on Thursday, which resulted in several decisions, including the pledge of the authorities in the region to abolish fees charged by Iraqi tourists from the rest of the country.

“It was historic and we had a good meeting. It can be said that it is one of the most successful meetings that have been held recently,” Ahmed said at a joint press conference with Al-Yasiri in Erbil during the latter’s visit to Kurdistan.

He added that “we discussed a lot of problems and issues relating to matters of nationality, passports, traffic and borders in addition to many topics of interest to citizens in the Kurdistan region.”

“The interior minister and the accompanying delegation were responsive and we thank them for the decisions that emerged from the meeting,” Ahmed said.

He stressed that “the policy of the Kurdistan Regional Government is about going to Baghdad and coordination with it at the highest levels and these relations will develop more in the future.”

For his part, Yasiri said during the conference that “the visit by the delegation accompanying him to the region was important and discussed many of the problems and issues related to the work of the two ministries.”

He pointed out that “the most important topics discussed were passports, the granting of entry visa, nationality, and the opening of special departments to grant the national card.”

Al-Yasiri pointed out that “among the topics also discussed joint security cooperation and the implementation of arrest warrants issued by the Iraqi judiciary in addition to the issuance of decisions on facilitating the transactions of citizens in the Kurdistan region and Iraq.”

Yasiri said that “the Interior Ministry of the region has pledged to cancel the entry fees for tourists from Iraqi citizens coming to the Kurdistan region.”

The United Nations has warned that existing regional tensions could deal a “huge blow” to efforts to rebuild a stable and prosperous country in Iraq, stressing that the international community should spare no effort to avoid it.

In a briefing to the Security Council on Wednesday, the UN envoy to Iraq, Jenin Hennes Blaschaert, noted that the Iraqi leadership is communicating with regional and international players to ensure that its country remains a common ground for stability, not a field of proxy conflicts.

The envoy appreciated Baghdad’s commitment to placing all armed factions in the country under the control of the state, adding that the implementation of this is vital.

For his part, stressed Iraq’s deputy to the United Nations Sarhad Fattah, that the opportunity to achieve stability and prosperity in his country is real but in danger, and therefore can not ask Baghdad to tolerate more tension and escalation in the region.

Fattah also touched on relations between Iraq and its northern neighbor Turkey, pointing out that the Baghdad government has sent almost 54 letters to Ankara asking for an immediate halt to the bombing of Iraqi territory, within the framework of the Turkish army operations against the PKK militants.