• Moody’s announces completion of a periodic review of issuers including Iraq, Government of

• Moody’s: Stable outlook for Levant and North Africa sovereigns in 2019, although global headwinds and slowing reforms point to downside risks

The office of the highest religious authority, Sayyed Ali al-Sistani, announced in Najaf on Friday the date of the first day of Eid al-Adha.

The office said in a brief statement (Baghdad Today) received, a copy of it, that “tomorrow, Saturday (3/8/2019) is the first of the month of Dhul-Hijjah in 1440 for migration.”

Thus, Monday after next, August 12, the first day of Eid al-Adha. 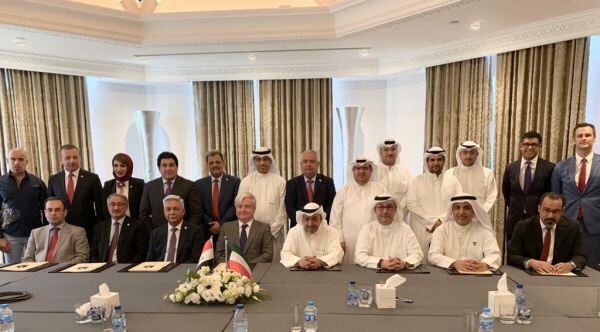 Iraq and Kuwait have signed a joint contract with the company “ERC Equipoise Pte.Ltd.UK” “global consultant” on the preparation of studies on the optimum investment of border fields between Iraq and Kuwait.

The head of the Iraqi side, Director General of Petroleum Contracts and Licensing Department at the Ministry of Oil Abdul-Mahdi Al-Ameedi said that the signing of the contract was the culmination of the work of the Iraqi-Kuwaiti Committee, an important step to strengthen the ties of bilateral relations between the brothers, and stressing the keenness of the government and the ministry to resolve all outstanding issues between the two countries. And to expand the horizons of cooperation between them in all fields, including the oil and energy sector. Abdul-Mahdi said that the global consultant will provide us with all the information on oil reservoirs and the size of reserves and other information, which paves the way for joint investment between Iraq and Kuwait.

For his part, the Kuwaiti side’s Undersecretary Sheikh Talal Al-Fahad Al-Sabah praised the bilateral relations between the two countries, appreciating the role of the joint committee which worked seriously resulting in this historic agreement and this important contract with the international consultant, stressing the depth of brotherly relations between the two brotherly peoples. The happiness and pride of what has been achieved, which charts serious features of the nature of the distinct relations that are rising towards broader and more comprehensive horizons.

The head of the consultant company (ERC) global that his company will start work in accordance with the contract, and prepare studies and collect technical information, in preparation for the conclusion of an agreement between the two parties for joint investment.

Oil Ministry spokesman Assem Jihad stressed the importance of this agreement between the two brotherly countries and the importance of this contract, which provides for the company to prepare technical and reservoir studies for the joint productive border fields, namely (Dome of Safwan – Abdali) and field (South Rumaila Rattka – Al-Ratqa field). And exploiting and investing the common border fields between the two countries in a way that guarantees the right of each party in these fields. ”

The ministry spokesman said that this agreement is the first in the history of the oil industry, and the first step towards the conclusion of new agreements regulating the investment and the optimal exploitation of the common border fields with neighboring countries in accordance with the formulas, mechanisms and international agreements adopted.

(Baghdad: Euphrates News) The Ministry of Finance changed the dates of payment of salaries, which falls within the holiday of Eid al-Adha for some institutions and ministries.

According to a document of the ministry obtained the agency (Euphrates News) a copy of it that the Ministry of Finance procedure included “the House of Representatives and the Office of the Presidency of the Republic and the Council of Ministers and offices affiliated, where the salaries will be paid on 6/8/2019 instead of 15/8/2019.”

The document referred to the “disbursement of salaries of departments not associated with the Ministry and the Ministry of Higher Education and Scientific Research on 7/8/2019 instead of 16/8/2019.”

It also included the submission of the date of payment of salaries “Ministries of Finance and Foreign Affairs on 8/8/2019 instead of 17/8/2019.” 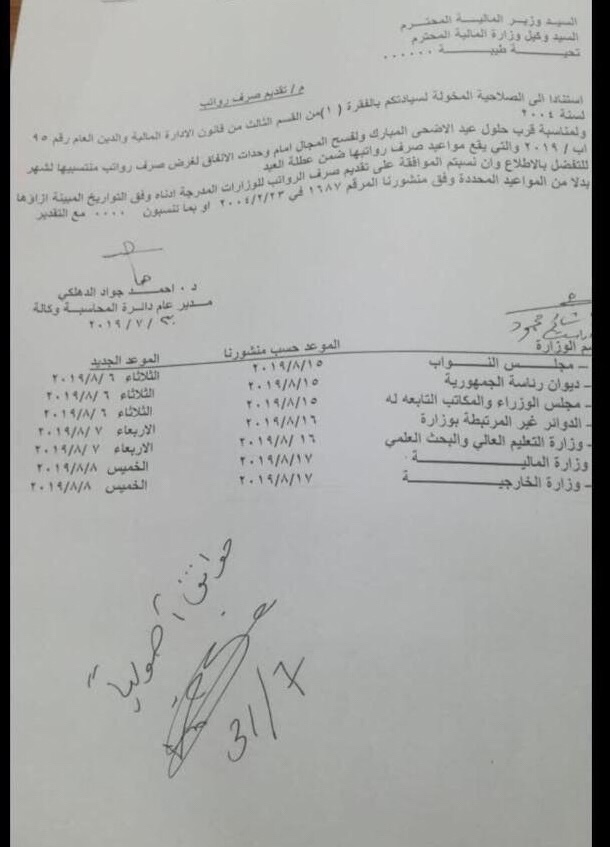 (Baghdad: Euphrates News) A source in the Council of Ministers of the Kurdistan region to disable the official working for five days on the occasion of Eid al-Adha.

The source said in a press statement, “The government of the region will disable the official working for a week on the occasion of Eid al-Adha.”

The source said that “the holiday will start on Sunday, August 11, until Thursday, August 15, with the official resumption of work on Sunday, 17 of the same month.”