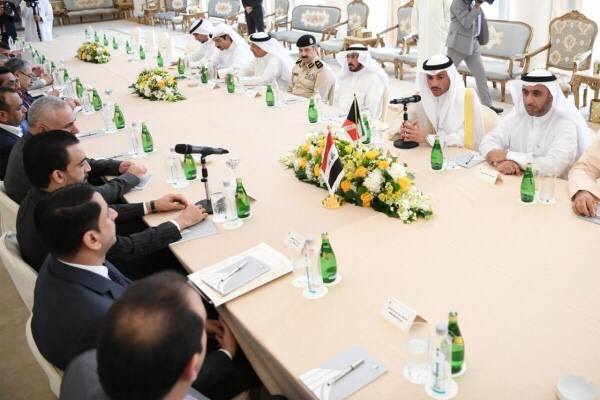 The Speaker of the House of Representatives Mohammad Al Halbusi and his accompanying delegation held official talks with Kuwaiti National Assembly Speaker Marzouq Al-Ghanim on Monday, in the presence of Kuwaiti Development Fund Director, Marwan Al-Ghanim.

At the start of the talks, Halaboussi thanked the State of Kuwait for its hospitality and good reception, expressing its appreciation and gratitude for the positions of Kuwait and Prince Sabah Al Ahmad Al Jaber Al Sabah in supporting Iraq in all fields.

The talks dealt with ways to enhance joint cooperation between Kuwait and Iraq in all fields, especially parliamentary and economic, and the outcomes of the Kuwait International Conference for the Reconstruction of Iraq.

The President of the House of Representatives, “Iraq is witnessing great harmony between the three presidencies and high coordination, and there is keen to strengthen relations with Arab neighbors, including Kuwait, and work seriously to resolve all outstanding problems in the interest of the two neighboring peoples and maintain the sovereignty of both countries, Kuwait in international forums and its positions on Arab and Islamic issues and support for Iraq. ”

“The Kuwait International Donor Conference is an important step, and we must work to establish a clear mechanism to activate it in how to transfer these funds to projects and start implementing them,” Halaboussi said.

For his part, Marzouq Al-Ghanim welcomed the Speaker of the House of Representatives and his accompanying delegation. He pointed out that the recent mutual visits between the two countries have contributed to the strengthening of relations in a way that serves the interests of the two brotherly peoples and that there is high coordination among parliamentarians in all regional and international forums, The two countries, investigating many successes and in more than one forum.

Al-Ghanim stressed the keenness of Kuwait’s Amir Sabah Al-Ahmad Al-Jaber Al-Sabah to develop Iraq and its stability, which represents the stability of the region and Kuwait, adding that it is a continuation of the Iraq reconstruction conference.

The Amir of Kuwait directed the executive and legislative authorities in the State of Kuwait to expedite the transfer of funds allocated at the International Donor Conference to concrete projects on the ground.