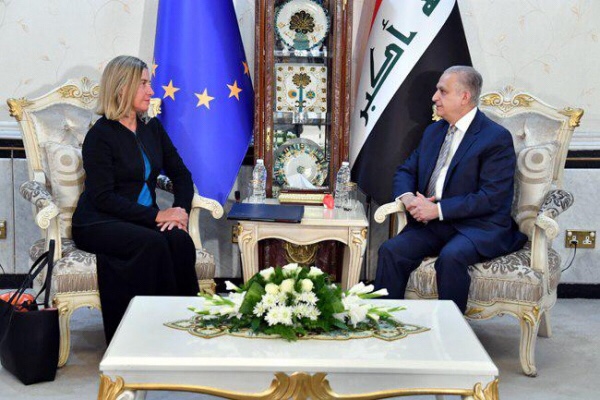 The Ministry of Foreign Affairs announced the joint statement of Foreign Minister Mohammad Ali al-Hakim and the High Representative / Vice-President of the European Commission Federica Mujerini on the relations between Iraq and Europe and regional cooperation.

“Iraq and the European Union reaffirm their common commitment to peace, stability in the Middle East in general and the call to reduce the escalation of current tensions in the region, recalling the dangers, and the dire consequences that are taking place,” the statement said. May hit Iraq and the region, and extends beyond that. ”

“Iraq and the EU share a common vision for the region and want to actively support activities and initiatives; to promote dialogue instead of confrontation, and to build a cooperative framework based on common interests.”

“The European Union remains committed to working with the Iraqi government to promote these values and believes that the Iraqi proposal for a regional conference deserves full support and commitment,” he said, .

“The EU Strategy for Iraq 2018 sets out the mechanism to support the political and economic priorities of the partnership with the Iraqi government, while the partnership and cooperation agreement that entered into force in August 2018 sets out the legal framework for this partnership, and the two sides look forward to rapid implementation; Including democracy, human rights, economic, trade, energy, security, transport, environment and migration issues. ”

“The EU and Iraq are working together to achieve the goals set by the Iraq Reconstruction Conference held in Kuwait in February 2018 to provide a better future for the people of Iraq based on improved governance and overall economic development.”

“The EU’s contribution of 1.2 billion euros in humanitarian assistance, stability, development and security cooperation since 2014 is the best proof of its long-term commitment to the strategic partnership with Iraq.”