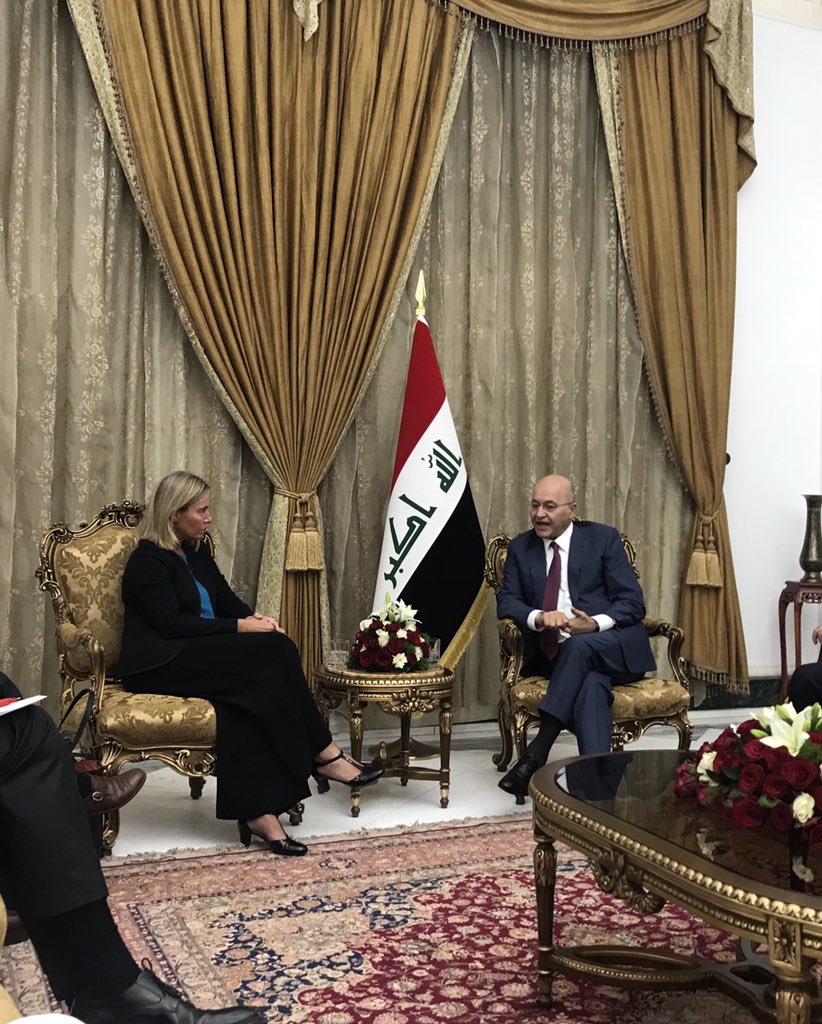 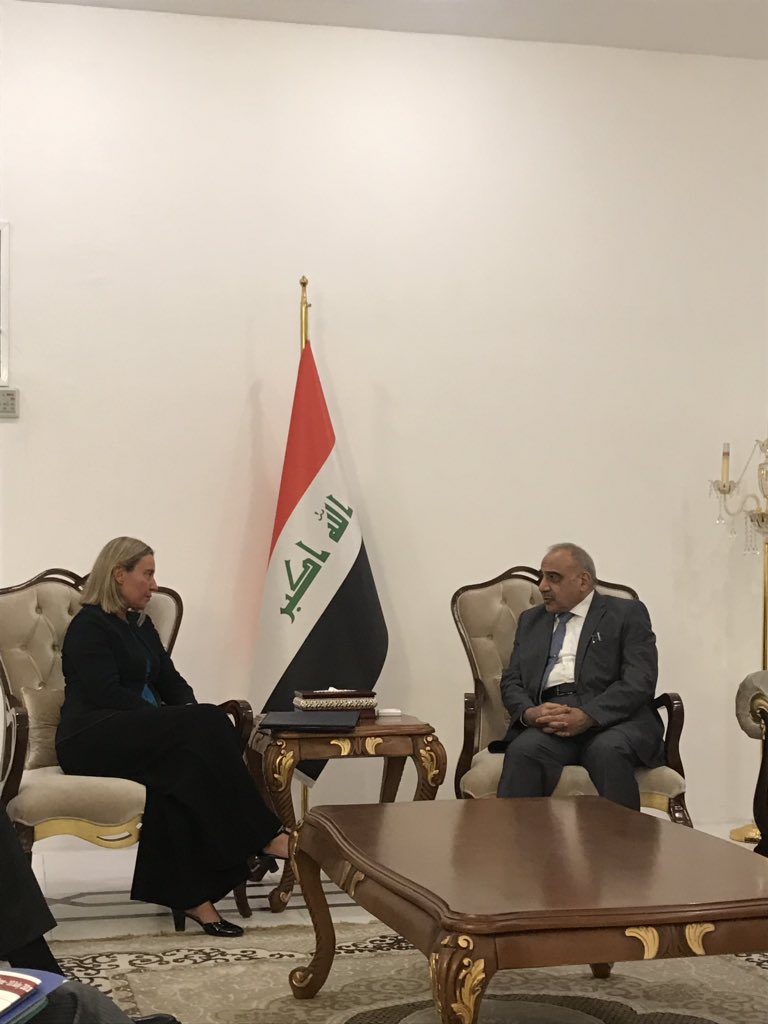 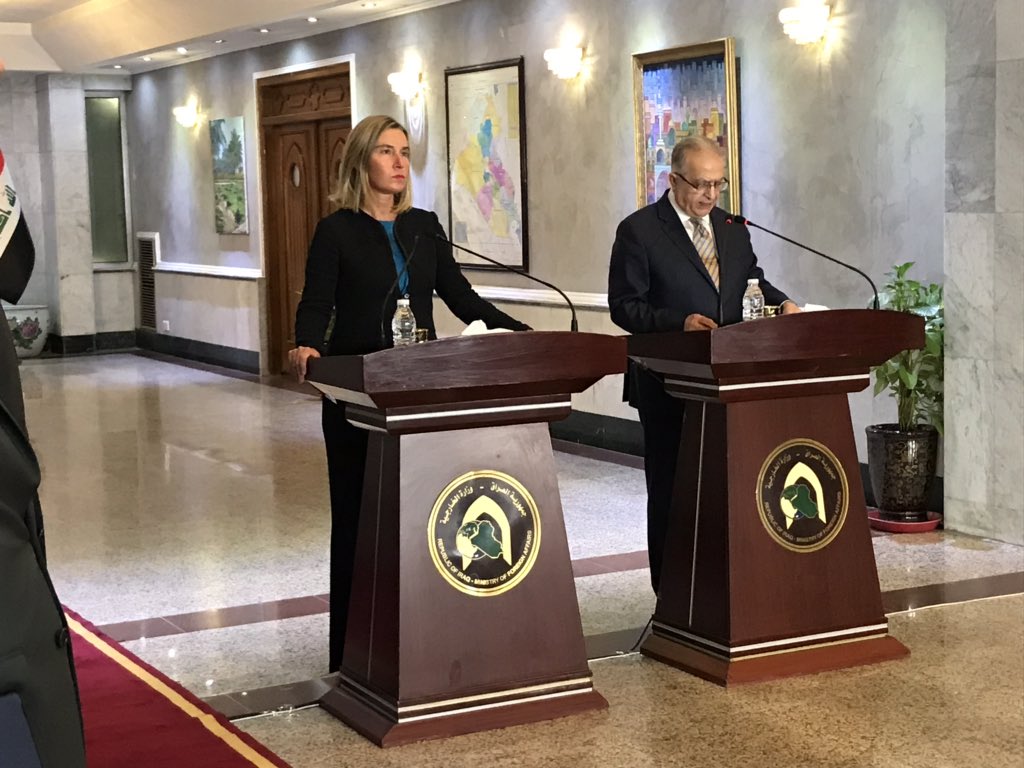 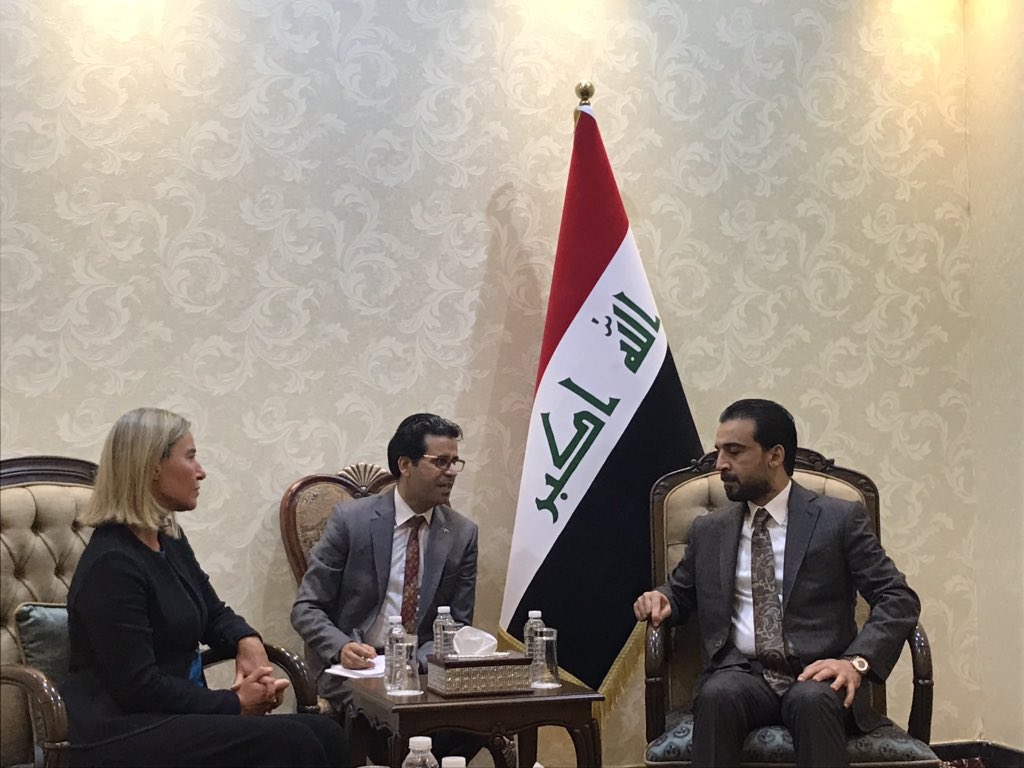 A statement from his office, received a copy of the “Euphrates News,” Abdul Mahdi said during the meeting that Iraq sees the European Union as a key partner, has made important progress and we are still working in this direction, pointing out that Iraq wants to encourage European investment in Iraq and increase cooperation in all fields , Political, cultural, economic and social. ”

Abdul-Mahdi said that “Iraq’s victory over a supporter gave a high price, and the effects of this victory is important for Iraq and the region and the world, including the European Union, and that the major countries to establish Iraq in its reality as a country emerged from the war and is now rising strongly and effectively not as a stable state For a long time, and should consider the criteria applied in the classification of international relations to Iraq as a country began to settle after fighting long wars, and therefore need some kind of positive discrimination.

For her part, Mughrini confirmed that “I have seen Baghdad now not seen the previous time, and that there is a great change for the better, indicating that the main purpose of her visit to Baghdad is to emphasize the EU’s support for Iraq politically, morally and financially, as well as to show solidarity with him, One of the best partners of the European Union, praising the success of Iraq’s balanced foreign policy in the region, calling for the continuation of this policy. ”

The agency revealed the intentions of former Prime Minister Haider Abadi, which is working to implement during the coming period.

Abadi is preparing to return to political life, and presents itself as an alternative to the current Iraqi Prime Minister Adel Abdul Mahdi, according to Agence France-Presse.

“Our intention is good in this regard,” Abadi told the agency he intended to return to political life.

Abadi pointed to “the danger of the return of sectarian conflict to Iraq after his great victory on the organization of” Dahesh. ”

Corruption has made Iraq the 12th most corrupt country in the world, Ebadi said.

Abadi betrays “summer and Iraqi protests over power cuts and lack of services.”

A source for the agency that Haider Abadi holds meetings with blocks and political parties and large for the return. President of the Republic Barham Salih said on Saturday that Iraq seeks to benefit from European expertise and experience in the reconstruction of liberated cities.

“The importance of coordination and consultation with the European Union on the need for joint action to spare the peoples of the region the scourge of war,” Saleh said in a statement received during a reception at the Peace Palace in Baghdad, EU High Representative for Security Policy and Foreign Affairs Federica Mugherini. Current issues and developments “

The President of the Republic referred to “the importance of benefiting from the European expertise and experience in the reconstruction of liberated cities, and supporting Iraq in assisting displaced people and providing safe and stable environment for them, as well as the Union’s contribution to urban, service and humanitarian projects.”

“The European Group supports the stability and balanced policy on international issues,” he said, reiterating “the commitment to work with Iraq to achieve the goals set by the reconstruction conference held in Kuwait last year in order to provide a better future for the Iraqi people”

Foreign Minister Mike Pompeo is seeking to make the withdrawal from his country’s embassy in Baghdad always, according to an exclusive report by Foreign Policy magazine quoting sources at the State Department.

Pompeo ordered in May a partial evacuation of diplomats from the US embassy in Iraq amid escalating tensions with Iran.

Now, many foreign officials say they have been told that reducing the number of embassy staff will always be a reality, a step that could leave only a few of the staff of the US embassy to take on important tasks, such as confronting Iran on the diplomatic front. In the short term, In the Washington area without an embassy to return to.

A spokesman for the State Department said that the description of the withdrawal was “inaccurate” and said “no decision has been made on permanent staffing levels but a review of staff is under way.”

But three other officials from the ministry said on condition of anonymity that the staffing levels at the Baghdad embassy, ​​reached after last May’s evacuation, were treated as a de facto permanent ceiling for Foreign Ministry staff in Iraq.

“They have already made a political decision to not return these people,” a senior ministry official familiar with the internal deliberations told the magazine.

“But they do not actually describe it as a withdrawal, they just say they are reviewing the departure order.”

However, only a small part of its staff are directly engaged in basic diplomatic functions, including political, economic and public diplomacy officials, and the majority are contractors, security personnel or officials from other federal agencies , Including the intelligence community.

After the partial evacuation, two officials told the magazine that the embassy had fewer than 15 foreign officials who had been directly involved in basic diplomatic missions.

The State Department spokesman did not confirm or deny the number of remaining employees, saying the foreign policy was not to disclose staffing levels for security reasons.