The Central Bank of Iraq announced on Thursday that the total foreign reserves to 72 billion dollars, indicating that this increase is the result of the investment policy followed by the bank and the diversification of the use of safe tools.

“The total foreign reserves rose to 72 billion US dollars in the light of the first half of 2019,” an authorized source at the central bank said in a statement received by Al Madar. “These reserves could rise to the $ 86 billion limit if The Ministry of Finance, taking advantage of high oil export revenues, to pay $ 14 billion to the Central Bank, which represent the remittances of the treasury, which the bank during the period of the financial crisis, seeking to achieve financial stability at the time.

He added that ‘this increase is the result of the investment policy pursued by the bank and the diversification of the use of safe tools, which strengthens the international credit situation, and enhance confidence in the Iraqi economy, in the framework of efforts to achieve monetary stability, as confirmed by exchange rate indicators, which remained in a state of balanced stability Over the past two years’.

The source added that ‘the achievement of this increase came in light of the continuation of the bank’s financial initiatives in support of investment projects, including the initiative of financing the 5 trillion Iraqi dinars, for projects of housing, agriculture and industry, in addition to the amount of trillion dinars for small and medium enterprises, thus contributing to reduce unemployment rates.

BAGHDAD / An Iraqi military source revealed on Thursday a meeting between military leaders of the Iraqi federal government with military and government leaders from the Kurdistan region to discuss the return of the Peshmerga forces to the province of Kirkuk.

The source said, “the eye of Iraq News,” that “a number of military and government leaders from the Kurdistan region, met with military leaders of the federal government in the camp of Kiwan, in order to discuss the return of Peshmerga forces to the province of Kirkuk.”

The source, who asked not to be named, said that “this meeting was conducted under US supervision, through officers and advisers from the International Coalition.”

The Minister of Oil Thamer Ghadhban revealed the signing of a memorandum of understanding with the Sultanate of Oman for cooperation in the oil and gas sector, including the possibility of establishing a joint oil refinery in Oman to refine the imported crude from Iraq.
“Iraq will aim to export crude to Oman under the memorandum of understanding, import oil products from Muscat and build crude storage facilities in both countries,” al-Ghadhban said in a statement.
“The memorandum of understanding also provides for the study of the possibility of establishing a joint oil refinery in the Sultanate of Oman to refine the crude oil imported from Iraq.”
He pointed out that “the prospects for joint cooperation and investment in the exploration and production of oil and gas, refining, manufacturing, storage and marketing of crude and petroleum products of the two countries will be discussed.”
http://alforatnews.com/modules/news/article.php?storyid=202614 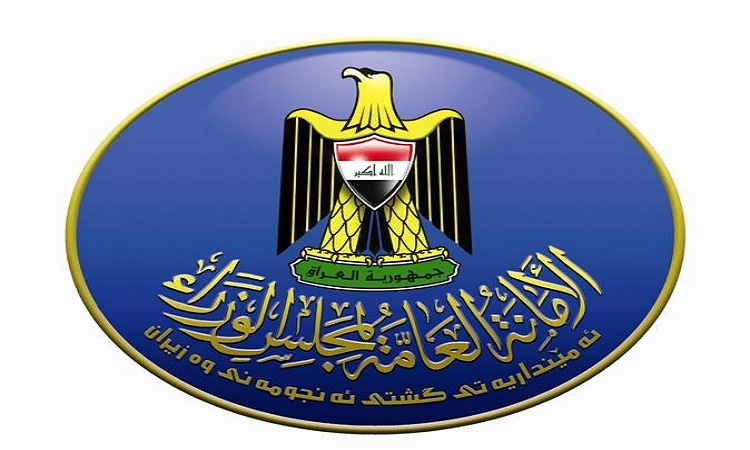 Mawazine News has obtained a document authorizing Finance Minister Fouad Hussein to sign a $ 200 million loan from the World Bank. 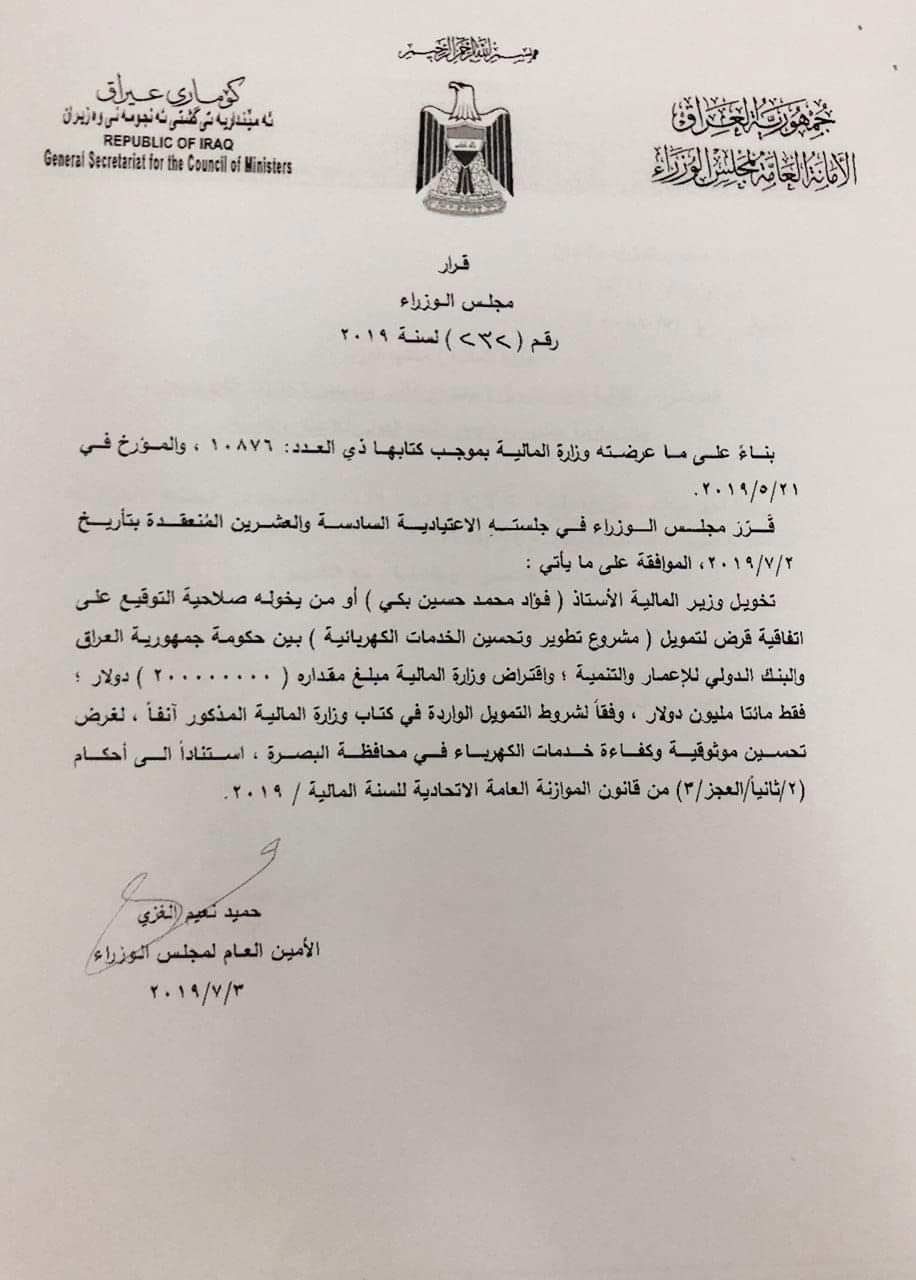 It has been one of the great pleasures of my professional life to work with Christine @Lagarde at the IMF. She is fantastic. The IMF’s loss would be the ECB’s gain! 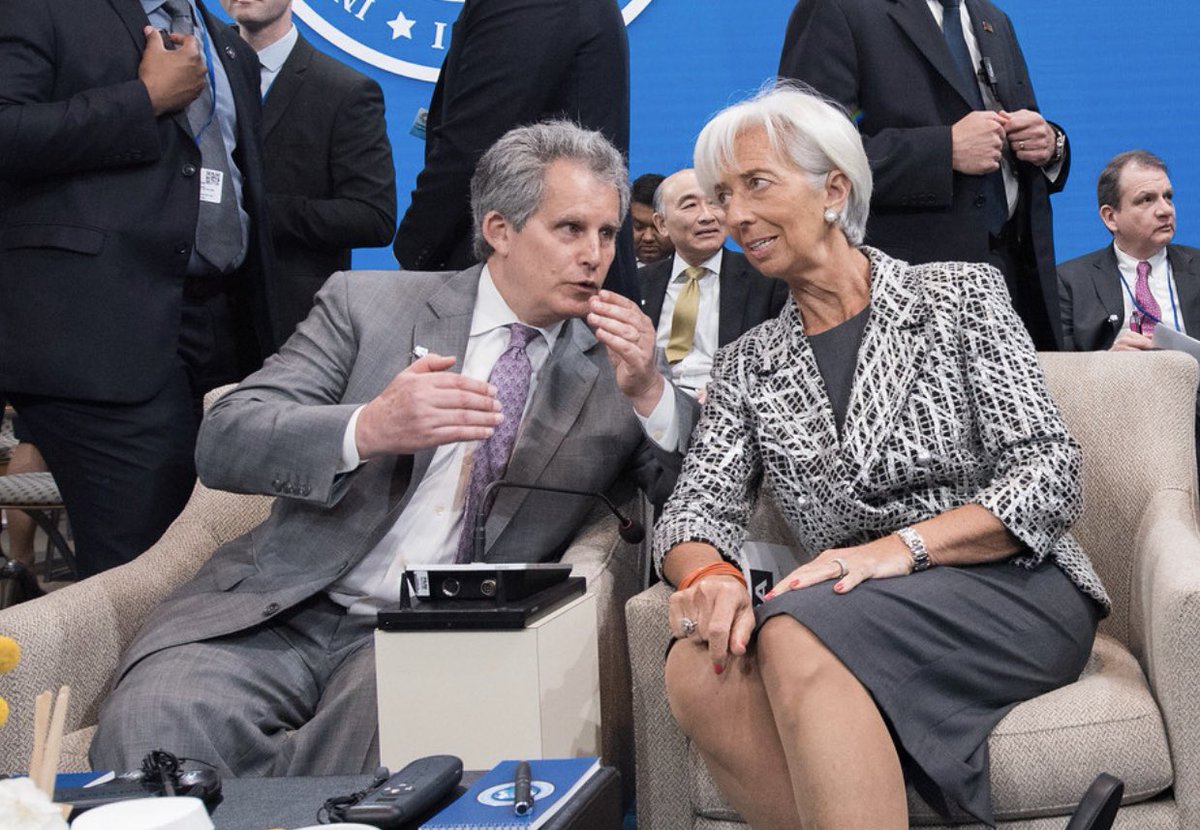 The Executive Board of the International Monetary Fund (IMF) issued the following statement today following the nomination of IMF Managing Director Christine Lagarde to the presidency of the European Central Bank.

“We, the Executive Board of the IMF, take note of the nomination of IMF Managing Director Christine Lagarde as President of the European Central Bank.

“We accept Ms. Lagarde’s decision to relinquish her IMF responsibilities temporarily during the nomination period. We have full confidence in First Deputy Managing Director David Lipton as Acting Managing Director of the IMF.” 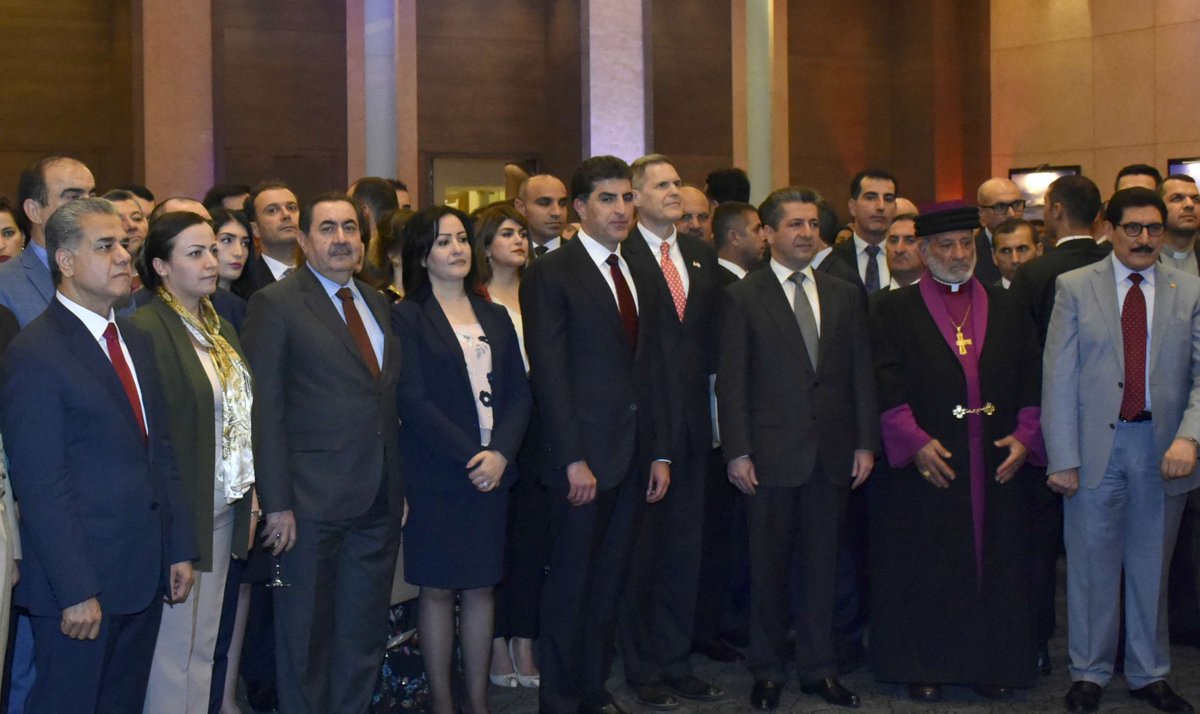 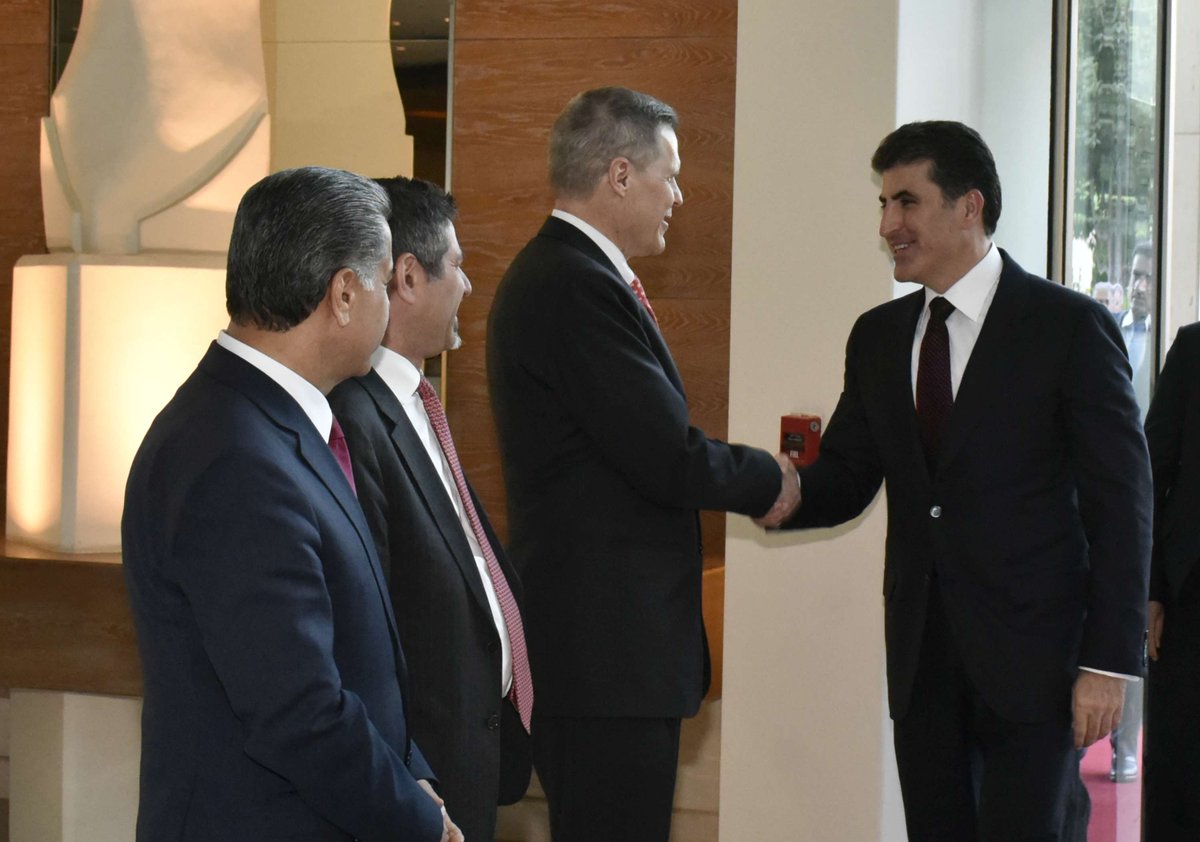 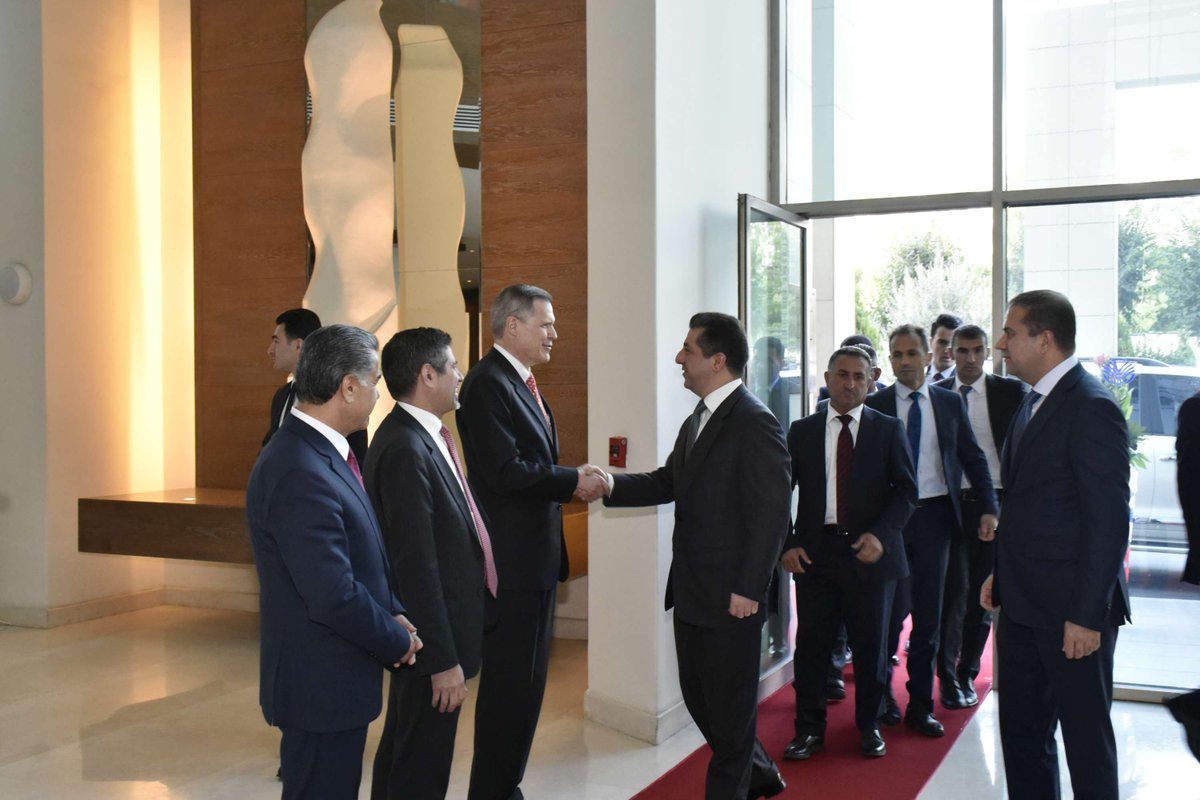