The Finance Committee of the parliamentary, Saturday, their agreement with the Ministry of Finance to receive the draft budget next year in September, indicating that the budget 2020 will make a quantum leap in the Iraqi economy.

“The Finance Committee and the federal ministries continue in meetings to discuss the budget next year and what are the basic needs of the government.”

He added that “the committee agreed with the Ministry of Finance to submit the budget early September next to include radical changes in public expenditure and investment funds and services.”

He explained that “the 2020 budget will be completely different from the previous budgets and will be closely matched with the government program to create a qualitative boom in the Iraqi economy,” noting that “the budget will be the highest in the history of budgets because of the availability of financial liquidity due to high

(Baghdad: Al-Furat News) The head of the Committee on oil and energy parliamentary Hibet Halbusi, the Commission’s readiness to support projects that contribute to increase the production of crude oil and gas.
“The committee will work to legislate the new laws or amend the laws and regulations in force,” the chairman of the committee said at the conference, which will be held from June 27 to 28 with the participation of international oil companies in London.
He added that “the committee is ready to work to overcome the obstacles and difficulties facing investment companies in this area and at all levels.”
“The committee opens its doors to receive any request for assistance in the event of any problems or difficulties in work because we believe that the cooperation of all parties is in the interest of all and the benefit of our country,” said the head of the oil and energy committee.
“The situation in the liberated areas is safe and stable, calling for encouraging companies to invest in these important areas,” he said
http://alforatnews.com/modules/news/article.php?storyid=202156

The members of the UN Security Council on Saturday urged the federal government to apply Article 140 of the permanent Iraqi constitution.

“The council supports the international team to investigate the crimes committed by a sympathetic organization in Iraq,” members of the council delegation told a news conference in Baghdad today.

Members of the UN Security Council voted to support the Security Council to rebuild the areas freed from the grip of the militant group, as evidenced by grants and loans at the Kuwait conference.

The members stressed the need to preserve the security and stability of Iraq and to play its role in the region and the world.

On Article 140 of the Constitution, members of the delegation said that “this subject was discussed with a number of Iraqi officials, as well as with the United Nations mission in the country.”

“We support the implementation of the country’s permanent constitution, and we encourage adherence to it.”

{Baghdad: Al-Furat News} The three presidencies decided to postpone the resolution of the administration’s proxy file to the 24th of next October.

This came during a meeting held by Presidents Barham Salih and ministers Adel Abdul Mahdi and MPs Mohammed Halbusi at the Peace Palace in Baghdad, on Saturday evening ..

A statement to the Presidency of the Republic, received the agency {Euphrates News} a copy of it today, “The meeting discussed the amendment of Article {58} of The budget law, and decided during the meeting to grant more time to the government until 24-10-2019, {the end date of the year of the life of the government} for the selection of personalities to run the state institutions, and the end of the file of the administration by proxy and support the government in choosing the best in accordance with the principle of efficiency and integrity and achieve national balance Away from quotas. ”

The meeting also focused on the national framework document for a unified Iraqi policy. The participants also stressed the need to limit the weapons to the state, to protect the promotion of national sovereignty and to confront with force all those who want to engage Iraq in conflicts and conflicts outside the interests of its people.

The participants stressed the need to establish balanced relations with the Arab, regional and international environment in accordance with the national interest.

The three presidencies reaffirmed the importance of protecting the diplomatic missions in Iraq and taking legal measures against those who try to tamper with the security and safety of these missions and their presence in Iraq.

(Baghdad: Al-Furat News) Foreign Minister Mohammed Ali al-Hakim met with members of the Security Council visiting Baghdad for a day in support of the Iraqi government.
“Al-Hakim reviewed the developments in the political situation in Iraq, the efforts of the government to restore security and stability, and the reconstruction of cities liberated from terrorist gangs,” a statement from the Foreign Ministry said. “Hakim reviewed the needs of Iraq for support by the Council Security in the post-victory phase and the government’s move towards adopting the investment program in the reconstruction of the provinces. ”
“The minister expressed the government’s vision of the crises in the region, the need to adhere to the principle of political solution, and to avoid the sensitive area, which is due to the tensions that affect everyone in the event of wars and confrontations,” he said,
“The meeting discussed regional and international issues of interest to Iraq,” the statement said. is over
http://alforatnews.com/modules/news/article.php?storyid=202213

The agency (Baghdad today), a letter issued by the Chairman of the Finance Committee on 29/6/2019, included a request addressed to Halabusi to postpone the vote on the candidates of the positions of the Governor of the Central Bank and the President of the Office of Financial Supervision, among the reasons that the reasons for postponement came to candidates And their plans to develop the work of those important institutions.

Prime Minister Adel Abdul Mahdi on Wednesday (June 26, 2019) sent the names of candidates for positions of special grades, including the Governor of the Central Bank to the House of Representatives after approval by the Council of Ministers.

Prime Minister Adel Abdul-Mahdi announced on Tuesday (25 June 2019) the vote on seventy general managers of all special grades, adding: “We will proceed with the steps to vote on these grades respectively, and without quotas despite attempts to impose some names, but we stopped all this and we Without quotas. ”

[Baghdad-where]
Prime Minister Adel Abdul Mahdi on Saturday that the crises and major challenges faced by Iraq deserve greater international support.
“The Prime Minister, Adel Abdul Mahdi, received on Saturday members of the UN Security Council, the first visit to Iraq,” noting that “Abdul-Mahdi reviewed the efforts of the Iraqi government in the areas of The reform of the economy and sustainable development, the exploitation of natural resources, the increase of agricultural production, the extension of the rule of law, the achievement of justice among the components of the Iraqi people, equality of opportunities and attention to women’s rights and increased participation in political life and administrative positions. “
Abdul Mahdi expressed his thanks and appreciation for this visit, noting that “this important visit shows the support of the Council and its interest in Iraq and the changes taking place in all areas and successfully overcome the great political, economic and security challenges.”
He added that “Iraq has witnessed external and internal wars and campaigns of oppression and destruction and waves of terrorism and inherited the destruction of infrastructure and social divisions and the destruction of our wealth and resources, human and material debt and large, and yet the Iraqis were able to pass the Constitution and the holding of several legislative elections led to a change and peaceful circulation of power and won to promote and liberated their cities” .
“When the supreme religious authority issued the advisory opinion of the Jihad to defend Iraq, millions volunteered and united and this unity won over a supporter,” pointing out that “our forces in various formations united and mobilized their forces and managed to achieve victory.”
“The deep crises, sacrifices and major challenges faced by Iraq deserve greater international support for the reconstruction of liberated and affected areas,” he said, pointing out that “our foreign policy is based on not engaging in the policy of axes and focusing on the many participants that bring us together with neighboring and regional countries, Interests and prosperity of all the peoples of the region and avoid tensions, crises and wars, and that these balanced relations achieve gains for Iraq and its people. “
During the meeting with the members of the Security Council, all members affirmed the support of the Security Council for Iraq, sovereignty, unity and stability. It also discussed the continuation of cooperation and coordination and the strengthening of the work of the UN Mission in the humanitarian, displaced, reconstruction of liberated areas and women’s and children’s issues. Iraq and its unity and the reconstruction plans, praising “the policy of the Iraqi government balanced and its relations with the Arab, regional and international environment.”
“We are pleased with this historic visit and our message to you that we have come to express our support for Iraq and its unity and sovereignty and to extend our congratulations on the victory over the martyrdom of the people of Iraq and for the international community to stand by you and support the partnership and efforts of the mission,” he said. International “in Iraq, which works with the approval of the Iraqi government and the successes achieved in various fields,” Hello “the initiative of the Iraqi government to improve relations with neighboring countries and the Arab and regional and international and described wise policy that serves the interests of Iraq and all countries in the region, as well as our support for the efforts of reconstruction and reform steps of the Iraqi government. “
The other members of the Council, who spoke during the meeting, congratulated the Iraqi people for liberating their cities and territories and completing the government formation and its efforts to consolidate stability and social cohesion, expressing support for Iraq’s sovereignty and supporting the government’s efforts to strengthen Iraq’s role and role.
The meeting was attended by Deputy Foreign Minister, Permanent Representative of Iraq to the United Nations, Head of the Department of Organizations, Director of the United Nations Department of Foreign Affairs, and a number of advisors.
https://translate.googleusercontent.com/translate_c?depth=1&hl=en&prev=search&rurl=translate.google.com&sl=ar&sp=nmt4&u=http://www.alliraqnews.com/modules/news/article.php%3Fstoryid%3D82567&xid=17259,15700021,15700186,15700190,15700256,15700259,15700261&usg=ALkJrhhwvU_sJRfTfDREsJRiP4GIHCQIWw

(Baghdad: Al Furat News) The Iraqi Council of Representatives decided, Saturday, to postpone the holding of its meeting to tomorrow.
A parliamentary source, told the {Euphrates News} that “the House of Representatives decided to postpone the holding of its normal session, until tomorrow at 11 am.”
The source attributed the reason to the “non-quorum of its contract
http://alforatnews.com/modules/news/article.php?storyid=202197 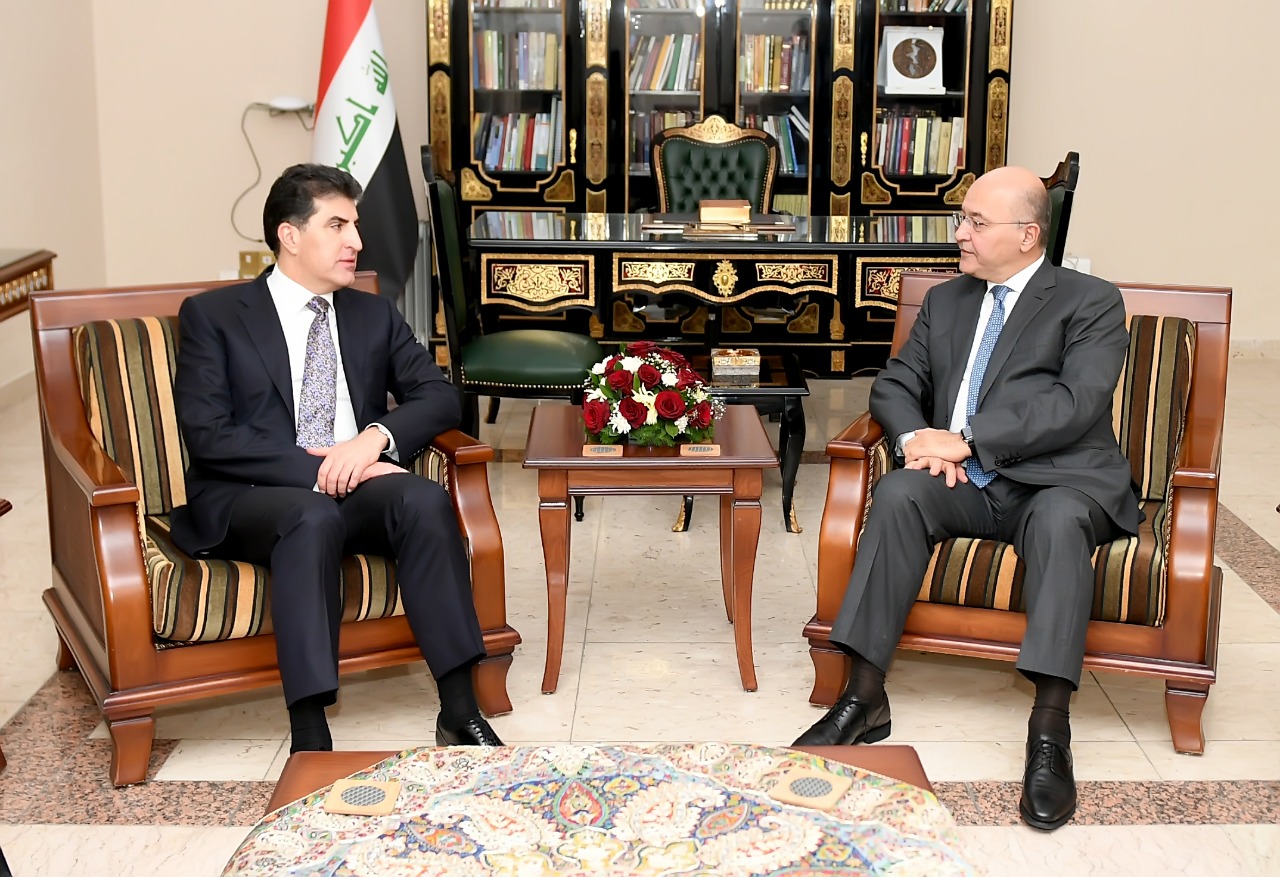 Baghdad – Mawazin News
President of the Republic, Barham Salih, Saturday, the need to rely on the Constitution to resolve outstanding issues between the Kurdistan region and the center.
A presidential statement received / Mawazin News / a copy of it, that “Saleh, received in Baghdad, the President of the Kurdistan region, Nechirvan Barzani,” noting that “the meeting discussed the comprehensive situation and political and security developments in the country, in addition to political developments at the regional and international levels and the emphasis on exclusion About conflicts and crises “.
Saleh stressed “the importance of coordination and consultation between all parties, the need to rely on the Constitution and the national interest on outstanding issues and access to common visions to overcome obstacles to the provision of services to all Iraqis.”
In turn, the President of the Kurdistan region expressed “a serious desire to start constructive dialogues and achieve common understandings with the federal government on topics and files of common interest.”