Former Iraqi prime minister Haider al-Abadi has resigned from the Islamic Dawa Party, raising questions about his possible return to the premiership.

Former Iraqi Prime Minister Haider al-Abadi announced May 31 his resignation from all his positions in the Islamic Dawa Party, whose politburo he headed. His move raised questions about his potential plans to return to the prime minister’s post.

Abadi also met with Iran’s ambassador to Baghdad on June 11; the former prime minister discussed the bilateral relationship between the two countries and also expressed his support for Iran against the sanctions imposed by the United States. The meeting, which was the first of its kind since his departure as prime minister, was read as an attempt to improve his relationship with Iran, which has a big influence in Iraqi politics.

Abadi also met with the new-appointed US ambassador, Matthew Tueller in Jun. 13. They discussed the overall political situation in Iraq and the region.

Abadi’s political career began in and developed through Dawa. The party was formed in 1957, and it monopolized the prime minister’s post from 2005 until 2018, when Abadi stepped down in favor of independent political candidate Adel Abdul Mahdi, who was the consensus choice of the two largest parliamentary blocs. These two blocs are Al-Islah, which includes the Abadi-led Victory Alliance and the Sairoon Alliance led by Muqtada al-Sadr, and the Construction Bloc led by Hadi al-Amiri, which includes political wings from the Popular Mobilization Forces (PMU) and factions that are strongly tied to Iran.

US Ambassador to Baghdad Matthew Tueller, during his meeting with the President of the Kurdistan region, Nigervan Barzani, on Saturday (June 15, 2019) expressed his satisfaction with the improvement of relations between Baghdad and Erbil.

“The President of the Kurdistan Region, discussed with the new US ambassador to Iraq, several issues, including improved relations between Erbil and Baghdad, and US assistance to the region,” noting that “Barzani met with Toler, and a delegation accompanying him.”

He also thanked Nechirvan Barzani, “US aid to the Kurdistan region in difficult times and in the convergence between Erbil and Baghdad,” and pointed to “continuing steps to improve the relations of Erbil-Baghdad.”

“Barzani,” the importance of assistance to the countries of the international coalition, especially America, in the field of reform in the Kurdistan region and Iraq in general. ”

BAGHDAD – Iraq has decided to grant visas to American investors directly through a special office at Baghdad International Airport to facilitate visits by the National Investment Commission to US investors
, the US Trade Representative Office said on Saturday . “The second session of the US-Iraq Trade and Investment Board was held in Washington, DC, which was established under the Trade and Investment Framework Agreement signed between the two countries in 2005, headed by the Iraqi Minister of Trade, Mohammed Hashim Al-Ani,” the US Trade Representative’s Office said in a statement. And US Deputy Trade Representative Jeffrey Grich. ” During the meeting, Iraq and the United States discussed a range of bilateral trade and investment issues and further integration of Iraq

In the global economy and look for ways to promote greater mutual market access, thereby creating jobs and attracting investment to both countries. ”
The United States expressed its support for Iraq’s decision to “re-join the World Trade Organization and carry out local reforms necessary to comply with WTO commitments and tariff liberalization and trade in services. The United States also expressed its support for Iraq’s decision to accept tax declarations prepared in accordance with international financial standards. ”
” Iraq has assured the United States that it will issue 12-month visas to US citizens and facilitate visits by the National Investment Commission to US investors by granting multiple visas for six months through a special visa office located at the airport,” the statement said.
“To improve access to bilateral and reciprocal markets, the United States raised the issue of reducing unnecessary documentation requirements and using international standards. The United States also encouraged Iraq to reduce the tariff of poultry, while Iraq and the United States also discussed imports of rice and wheat and transparency of the process of grain tenders in Iraq under two memorandums of understanding, and Iraq has partnered with the United States in a memorandum of understanding to increase purchases of medicines and medical equipment and equipment. Ending / 25 z

The coalition of Iraqi forces held a meeting Saturday evening in Baghdad, including dozens of members of the House of Representatives for the Sunni component.

A source familiar with the twilight news, that the President of the House of Representatives Mohamed Halabousi during the meeting as the head of the coalition.

The alliance of Iraqi forces is a dissident from the alliance “National Axis”, which includes the Sunni blocs and headed by the Secretary-General of the Arab project in Iraq Khamis Khanjar. The bloc said in a statement that this ‘orientation comes not to provide something tangible within 6 months’, indicating that ‘hosting comes because of the apparent failure in the performance of the government and this is contrary to promises’, stressing the need ‘to file files of corruption and 40 corrupt immediately’

“We reject the government based on political quotas, and we will have a clear opinion if we do not believe the answers provided.”

Fruitful exchange today with new US Ambassador to Iraq Matthew Tueller — We agreed to have technical talks once the new KRG Cabinet takes office on measures necessary to promote more American investment and business-to-business ties — good for Kurdistan Region and Iraq. 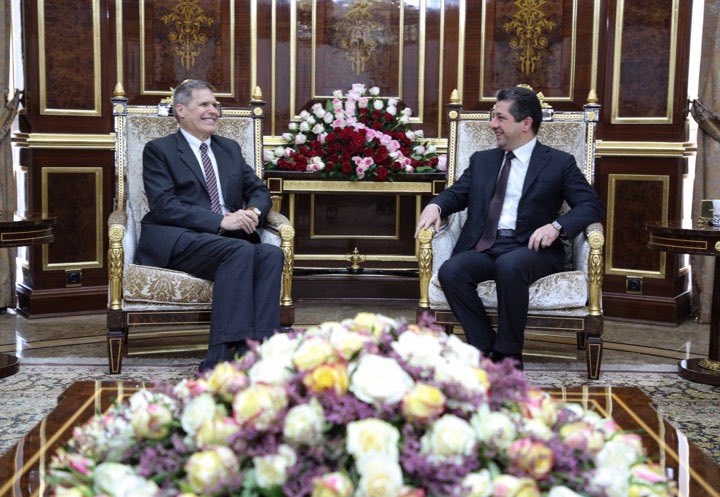 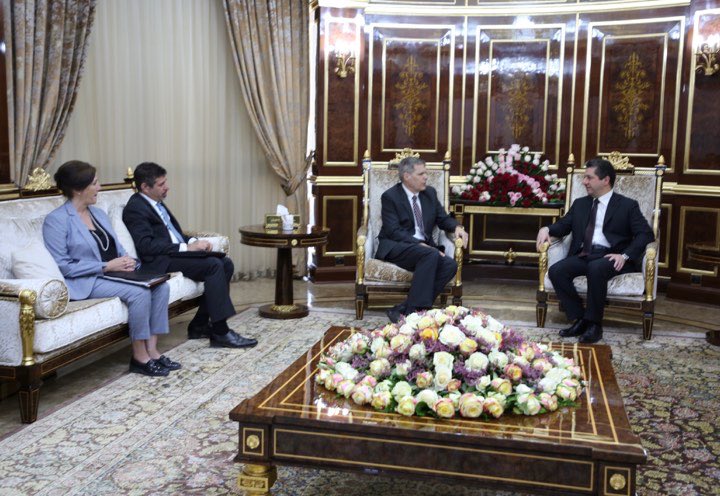 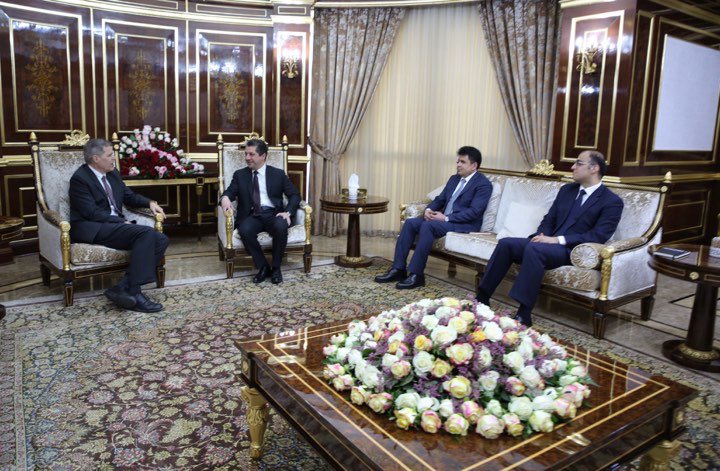 The leader of the Kurdistan Democratic Party, Massoud Barzani met on Saturday in Salahaddin, Maceo Toler, the new US ambassador to Iraq.

“During the meeting, which was attended by US Consul General Steve Vickin in Erbil, President Barzani congratulated the new US ambassador in Iraq on the occasion of assuming his new duties, and wished him success,” the statement said.

In another part of the meeting were the threats of extremist thought and terrorists, and called for ways to address the radical and ways to uproot it, as in the statement.

Barzani expressed his thanks to the German government and people for the assistance and support provided to the forces of Peshmerga Kurdistan during the war against the supporter of the terrorist, describing this support as the actor and influential influential to change the field balance in the war against Dahesh.

For his part, Deputy German Minister expressed his country’s satisfaction with the improvement of relations between the Kurdistan Region and Baghdad.

In other axes in the meeting were discussed the relations between the Kurdistan Region and Germany, and the situation and political changes in the region.

The correspondent “Al-Ghad Press”, “The House of Representatives decided to raise its meeting to Saturday 22-6 at 11 am.”

He added that “the agenda of the upcoming meetings will include voting on the completion of the ministerial cabin and the termination of the Agency and special grades until the end of the legislative term.”