A security source said at dawn Friday, the fall of a Katyusha rocket near the headquarters of a member of the current wisdom in the Karrada district of central Baghdad.

The source told “news”, that “was heard Doi Afgar in the Karrada district, 911 911 Street 26 Dar 33 dawn this day and was immediately heading to the scene of the incident.”

“It turned out that the explosion was the result of the fall of a Katyusha rocket, according to preliminary information,” noting that “the house was the headquarters of the ruling movement.”

“The explosion caused only material damage and no human damage,” he said. A source close to the coalition of Iraqi forces, on Thursday, chose the alliance Speaker of the House of Representatives Mohammed Halbusi as its president.

The source told “news” that “the coalition of Iraqi forces chose the Speaker of the House of Representatives Mohammed Halbusi as the head of the coalition.”

He added that “the deputy was elected Falah al-Zaidan as head of the parliamentary bloc and the choice of Raad al-Dahlaki as his administrative deputy and Mohammed Karbouli political deputy.”

“Zaytoun al-Tamimi was elected as the bloc’s leader and Jumili’s unit was speaking on behalf of the bloc and Gidaa Kempash was a spokeswoman for the bloc.”

BAGHDAD (Reuters) –
Trade Minister Mohammad Hashim al-Ani discussed Thursday with his US counterpart Wilbur Rooz and US deputies the importance of developing bilateral relations in the field of wheat imports from US origin.
“The Minister of Commerce held a meeting with the US Commerce Minister Wilbur Roose at the headquarters of the US Commerce Department on Thursday and discussed bilateral relations in the field of importing wheat from American origin,” a statement from the Ministry of Commerce said. “And expressed his thanks for the support provided by the United States to the Iraqi people through processing contracts wheat and rice American.
According to the statement, the two sides agreed on the need to continue bilateral relations because of their effective role in securing the food basket for the Iraqi people
Iraqi Trade Minister Mohammed Hashim met on Thursday with American Senator Ralph Abraham in the US capital. The Senator expressed his thanks to the Ministry of Commerce for purchasing wheat and rice contracts from the American side. The two sides agreed on the need to strengthen relations between the two countries through the supply of wheat contracts US because of the advantages enjoyed by the fit of the Iraqi public taste
has touched the Minister of Commerce to support to the Iraqi side by CLDP program to the Iraqi side expressed its readiness to cooperate in this area
ended
tc n 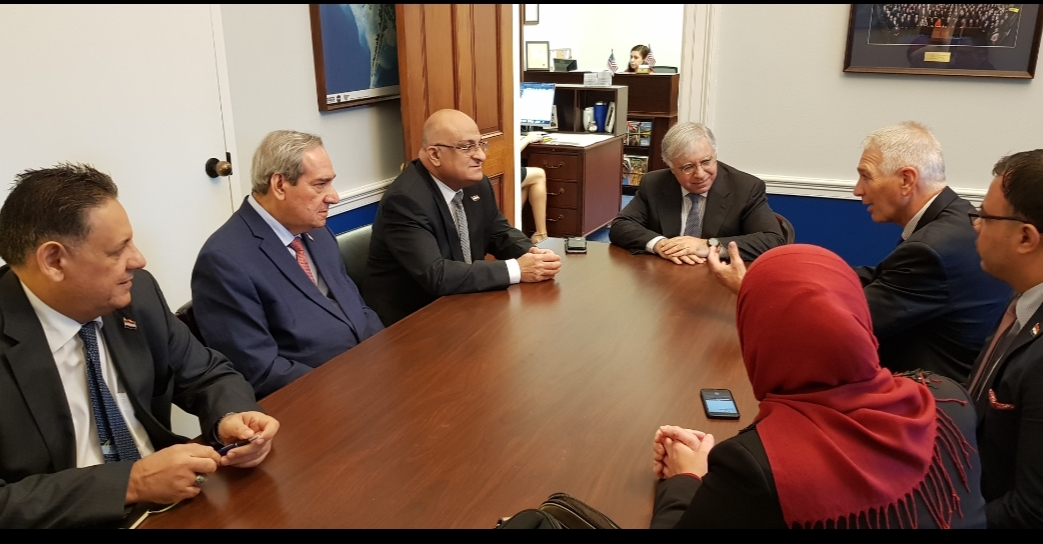 “Washington believes that Iran is responsible for the attacks in the Sea of Oman,” he told a news conference.

“We will defend our interests and our allies and international trade from the danger of Iran,”

he said, adding that Iran was working to disrupt the movement of oil through the Strait of Hormuz, and that it insulted the Japanese prime minister after striking one of his country’s ships during his visit.

“A terrorist act was carried out by a roadside bomb in Wathba Square and another explosive device was also detonated in the Shula area of Baghdad,” the cell said in a brief statement.

President of the coalition of victory Haider Abadi, on Thursday, with the new US ambassador to Baghdad, Matthew Taylor, the political situation in Iraq and the region.

“I have received the new US ambassador to Baghdad, Matthew Taylor, and I have congratulated him on the occasion of assuming his duties,” Abadi said in a statement. He wished him “success in his work and contribute to coordinate positions and enhance cooperation between the two countries.”

The two sides discussed the overall political and public situation in the country and the region.

The legal expert Ali al-Tamimi said on Thursday that Prime Minister Adel Abdul Mahdi will face dismissal and replacement if he fails to complete the cabinet cab at the end of this month, while Abdul-Mahdi failed and exceeded the constitutional terms to complete his cabinet.

“The President of the Republic, Barham Saleh, has the right to replace Abdul Mahdi and his dismissal because he failed to complete the ministerial cabin for more than eight months, ” Tamimi said in a statement to Al-Maaloumah. “Article 76 of the Iraqi constitution stipulates that the elected prime minister is obliged To provide the cabinet cabin within a maximum of thirty days, while Article 77 of the Constitution to allow the President of the Republic to replace the Prime Minister someone else if he failed to complete his cabinet during the constitutional period.

He added that “the survival of four ministries within the current government is incomplete for more than eight months is a government failure and a constitutional violation,” noting that “President Barham Saleh is obliged to replace Abdul Mahdi, if someone fails to pass the remaining ministries during this month.”

And that “the country will enter a new legal problem on the issue of replacement that Abdul Mahdi did not come from a larger bloc, but got the post of prime minister through political consensus between the blocks, as well as the lack of the House of Representatives for the largest bloc so far.”

The parliamentary government monitoring committee indicated earlier that the work of most of the ministers of the current government is unconvincing for the House of Representatives and their ministerial role has not been seriously activated, stressing that the House of Representatives will host a number of ministers during the second legislative term to give them a final deadline before going about Removal. End 25 T