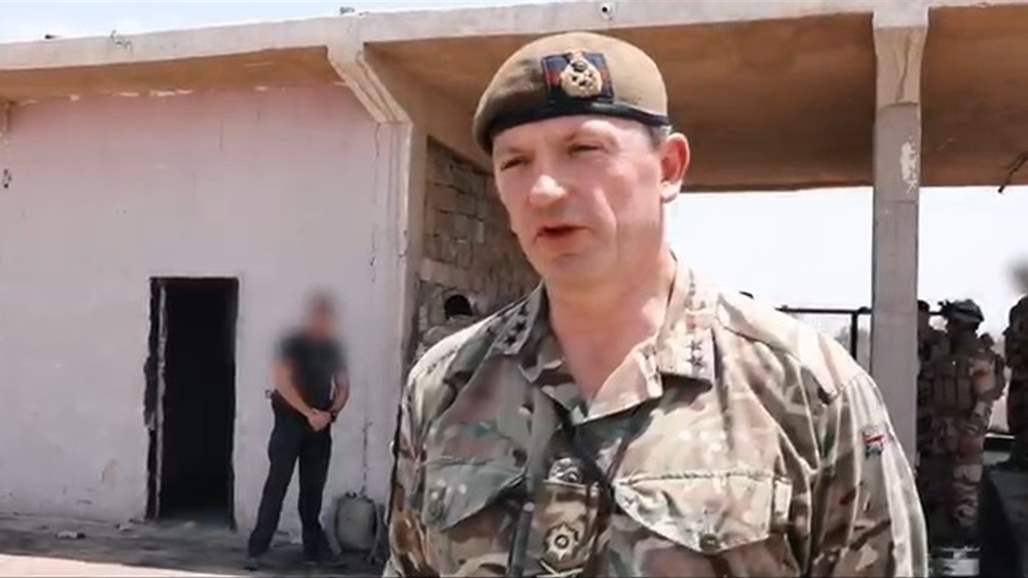 The International Alliance announced on Tuesday that it does not have training bases in Iraq, stressing that its forces were present at the invitation of the Iraqi government.

(Baghdad: Al-Furat News) Speaker of the House of Representatives Mohammed Halbusi received on Tuesday the US Ambassador to Iraq Matthew Toller on the occasion of his appointment as the new ambassador to the country.

A statement from his office received the agency {Euphrates News} a copy of him that Halbusi congratulated during the meeting congratulated Ambassador Toller on the occasion of his appointment as ambassador to Baghdad, wishing him success in the performance of his duties of the new diplomatic; to promote bilateral relations between the two friendly countries, ”

The meeting touched on” And the prospects for developing relations between Iraq and the United States of America, as well as a number of issues and developments in the region. ”

Prime Minister Adel Abdul Mahdi, Tuesday, the only body capable of changing, while referring to the need to end the cabinet cabins.

“The change of the prime minister comes back to the House of Representatives and there is no movement towards that,” Abdul Mahdi told a weekly conference attended by Mawazine News.

He added that “the cabinet must be completed before the end of the current legislative term of the House of Representatives,” stressing that “is committed to the implementation of the government program.”

The Prime Minister Adel Abdul Mahdi, on Tuesday, his intention to resign from his post, while confirmed “close” to resolve the file to complete his cabinet.

“The news that I spoke about my intention to resign does not have any validity,” Abdul Mahdi said at his weekly press conference, and attended by (Baghdad today), noting that “the change of prime minister in the hands of Parliament.”

He added that “the file of completion of the cabinet cabins will be decided soon,” stressing that “the lack of authority for parties to the state, and that the Prime Minister is responsible for the performance of ministers.”

The Prime Minister pointed out that “all parties do not want war in the region.”

The media has circulated recently, news that the intention of Prime Minister Adel Abdul Mahdi, to resign from his post, while the MP of the alliance of others, Amjad al-Aqabi, Sunday, June 9, that Abdul Mahdi “will not continue in office, and that his coalition will have a position of Weak government performance “.

(Baghdad: Al Furat News) The House of Representatives in its 22nd session held under the chairmanship of Mohammed Al Halbusi, the President of the Council, on Tuesday, in the presence of 179 deputies, discuss the draft law of the first amendment to the law of elections provincial councils and judges and the rights of martyrs of the crime of air base as he proceeded to vote on the law One read and another code.
The press service of the Council in a statement, received {Euphrates News} copy of it, that at the beginning of the session, the Council began to vote on the draft amendment to the first law of the civil presses No. 5 of 1999 submitted by the committees of culture and information, tourism and archeology, security and defense in view of the dissolution of the Ministry of Information and Freedom House To print the printing press after 9/4/2019 and to increase the license fees for the establishment of printing presses and stores covered by the provisions of the Civil Printing Law and its renewal and the amendment of the amounts of fines and penalties imposed on violators of the provisions of the law in proportion to the current economic conditions and determine the competent authority to implement the law .
The Council called for reading the report and discussion of the draft law of the Federal Supreme Court, submitted by the Legal Committee at the request of the Committee concerned and presented at the next meeting.
In another regard, the Council ended the reading of the report and discussion of the draft law of the first amendment to the law of provincial and district elections No. 12 of 2018 submitted by the committees of regions and governorates not organized in the territory and law.
The deputies’ interventions focused on the importance of distributing the seats to the winners according to the highest votes and addressing the negative of the law in force on the counting of votes in order to achieve reform and change and fix the distribution of women seats in the provincial elections law and put a condition to ensure that the winner does not move from one block to another block and reduce the age of candidacy from 30 years to 25 years in order to make room for young people to participate in politics.
The interventions pointed to the need to check the voters’ records before the elections, especially with regard to the Kirkuk governorate elections, with the importance of not questioning the records and not postponing them, and holding a workshop with civil society organizations to determine the age of candidacy and the mechanism of distributing the seats, as well as determining the procedures related to the date of the district elections and dividing the province into departments. The candidate holds a bachelor’s degree.
The interventions during the session, headed by Dr. Bashir Haddad, Deputy Speaker of the House of Representatives, among them to demand the allocation of a seat for the Sabean component of the province of Basra and increase the representation of the Faili Kurds to two seats for each of Wasit and Baghdad and a seat from Diyala province and granting a seat for Kirkuk in Nineveh and a seat for people with special needs, Increase the percentage of seats to 70% according to the principle of the highest votes to be the remaining 30% according to the proposed system as it gives a real opportunity to represent the will of voters as well as the announcement of the results of the general vote within 48 hours and within 24 hours.
In its response to the interventions, the relevant committees confirmed that consideration should be given to the deputies’ proposals to prepare the draft law.
The President of the House of Representatives to hold a meeting of the Presidency of the Council with the heads of parliamentary blocs and in the presence of the relevant committees on Sunday to discuss the draft law for the first amendment to the law of provincial and district elections No. 12 for the year 2018, to be held another meeting next Monday during which Hosting the members of the electoral Commission and the government representative for the purpose of discussing the proposals of parliamentary blocs in order to browning the law.
The Council completed reading a report and discussion of the draft law of the rights of the martyrs of the air base and a crime submitted by the committees of the martyrs and the victims and political prisoners and human rights.
The deputies’ interventions emphasized the importance of the law to include a clear condemnation of the crime committed and not to allow impunity for the perpetrators, whether in the crime of air base or the fall of the cities of Mosul and Tal Afar with the serious attempt to mandate the Ministry of Foreign Affairs and the Martyrs Foundation to work with the international community to consider crimes committed genocide On the need to commemorate the martyrs through the establishment of memorials or naming streets and squares in the cities of the names of martyrs in addition to naming the air base in the name of martyr pilot Majid Tamimi instead of calling it the {Spyker}.
The interventions included the call for the formation of a high criminal court that will be charged with the prosecution of those who commit serious crimes in the form of a terrorist organization and honor those who contributed to the protection of some volunteers at the air base and provide material and moral support to the martyrs’ families.
The Council began reading a report and discussion of the draft law of ratification of the Convention on the avoidance of double taxation and prevention of financial evasion in respect of the income tax and capital between the Government of the Republic of Iraq and the Government of the United Arab Emirates and submitted by the Committees of Foreign Relations, Finance and Integrity.
Then it was decided to adjourn the meeting until next Thursday, 13/6/2019
http://alforatnews.com/modules/news/article.php?storyid=200548

BAGHDAD (Reuters) – Iraqi Prime Minister Adel Abdul-Mahdi announced on Tuesday that thousands of antiquities had been recovered from the United States.
This came during his visit to the Iraqi Museum on Tuesday.
“Iraq was and will remain a civilized and historic center and we should benefit from this great legacy to build the present and future of Iraq,” he said in a statement received by al-Furat News.

“The Iraqi Museum is a great knowledge and humanistic school that documents the various activities, sciences, human arts and antiquities from various antiquity dating back to pre-Christmas, modern, contemporary and Islamic, which are unparalleled in all the world’s museums.”

“The restoration of 15 thousand archaeological artifacts from the United States,” he said, referring to “the restoration of large numbers of authentic Iraqi antiquities from Jordan earlier,” while calling for “to draw the attention of public opinion to the Iraqi Museum and encourage his visit And to know its human and cultural content. “