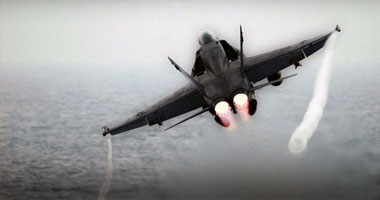 The Iraqi Ministry of Defense announced that it had received a final batch of F-16 aircraft from the United States .

The Iraqi Ministry of Defense – in a statement issued by the Iraqi National News Agency “Nina” on Friday – that the air base Balad received the last batch of F-16 aircraft, adding that the air force commander team pilot Anwar Hama Amin, was receiving the aircraft, Commander of the air base of Balad, and a number of officers and staff members .

The commander of the Iraqi Air Force that this batch comes within the contract concluded with the United States of America, noting that these aircraft are a large addition to the Iraqi Air Force, which has witnessed a significant development on the level of combat and training .

Pompeo: We will not allow Daish to restore his caliphate and influence in western Iraq

“We will continue to pressure all cells everywhere, whether in Southeast Asia, Syria, Iraq or even Afghanistan,” US Secretary of State Mike Pompeo said.
“We will not allow Daash to restore his caliphate and influence in western Iraq or eastern Syria,” Pompeo said
http://alforatnews.com/modules/news/article.php?storyid=196986

“Our common ambitions with Iraq include the reconstruction of Mosul and we will contribute to that,” French President Emmanuel Macaron said.

“The stability of Iraq and the region is important to us and we want Iraq to gain security and be a model for countries in transition,” McCron said at a joint news conference with Prime Minister Adel Abdul Mahdi.

“We will invest in the reconstruction of Iraq in the sectors of transport, energy and agriculture,” he said. “The stability of Iraq and the region is important to us and we want Iraq to gain security and be a model for countries in transition.”

For his part, Abdul Mahdi, said that “a supporter seeks to return by all means and the speech of the leader of Abu Bakr al-Baghdadi, the latter refers to it,” pointing out that “we fought with France and urged the elimination of a supporter on the ground, but still exists.”

“We agreed to raise the level of cooperation with France. We discussed the border with Syria and the numbers of refugees and foreign fighters. We agreed on very important visions and found full interaction on the French side,” he said.

“The current government is based on the independence of the members of the formation from the prime minister and the ministers, and the candidates are nominated by the political forces. The government’s work focuses on construction, reconstruction and economy,” he said. “The situation in Iraq is developing positively.”

“We preempt terrorist acts through our intelligence work to dismantle sleeper cells and thwart operations that try to re-establish their former position,” he said. “Unity among all Iraqi political forces is important, and not for victory.”

He pointed out that Abdul Mahdi ”

The situation in Iraq is developing positively with the improvement of the security situation against the background of the unity of the political parties, “declaring” the opening of a French cultural attaché in Mosul. ”