“We aim to build a strong independent Iraq and we have detailed plans and programs to strengthen the economic situation, attract investment, build factories, provide jobs and achieve reconstruction that the Iraqi people aspire to,” he said. “The war against Da’ash is not only the Iraq war but the whole world war because a threatening threat threatens all countries.”

“Iraq is a big country with a history and depth of civilization and qualified to take a big role in the region,” said Dukurth. “Iraq is a long-term strategic partner and we care about its security, independence and sovereignty.”

“We are happy with your success and the promotion of democracy in Iraq and we see in Iraq a great and united university force for the various visions and it is the only country capable of playing this role and promoting dialogue that serves security and stability in the region,” said independent member Angus King.

(Baghdad: Al Furat News) Prime Minister Adel Abdul Mahdi received in his official office today a US Senate delegation headed by Democratic Senator Tammy Duckworth.
“The sacrifices of the Iraqis have pushed the danger from the region and the world and we are going to build a strong independent Iraq and we have detailed plans and programs to strengthen the economic situation, attract investments, build factories and provide jobs,” a statement from his office said. And achieve the reconstruction of the Iraqi people. ”
“The war against Da’ash is not only the Iraq war, but the whole world war because a threatening threat threatens all countries,” he said.
“We congratulate you on the success of the democratic process and the victory over the sacrifices of the Iraqis,” she said. “I am happy to see Iraq differently, restore cities and lift barriers from its streets, and Iraq is a great country with history and cultural depth, in the region, while the member of the Republican party Johnny Isaacson said that Iraq ‘s long – term strategic partner and concerns us secure independence and sovereignty. ”
said independent member Angus King , ” We are pleased with your success and the promotion of democracy in Iraq , and we see in Iraq , great strength and a unified University of the brain Wrapped visions and it is the only country capable of doing this role and strengthen the dialogue that serves security and stability in the region. “
The delegation includes Republican senator from Georgia, a member of the Senate Foreign Relations Committee, Senator John Isaacson, an independent senator from Maine, a member of the Armed Forces Intelligence Committee, Angus King, and US Charge d’affaires Joy Hadd.
http://alforatnews.com/modules/news/article.php?storyid=196202 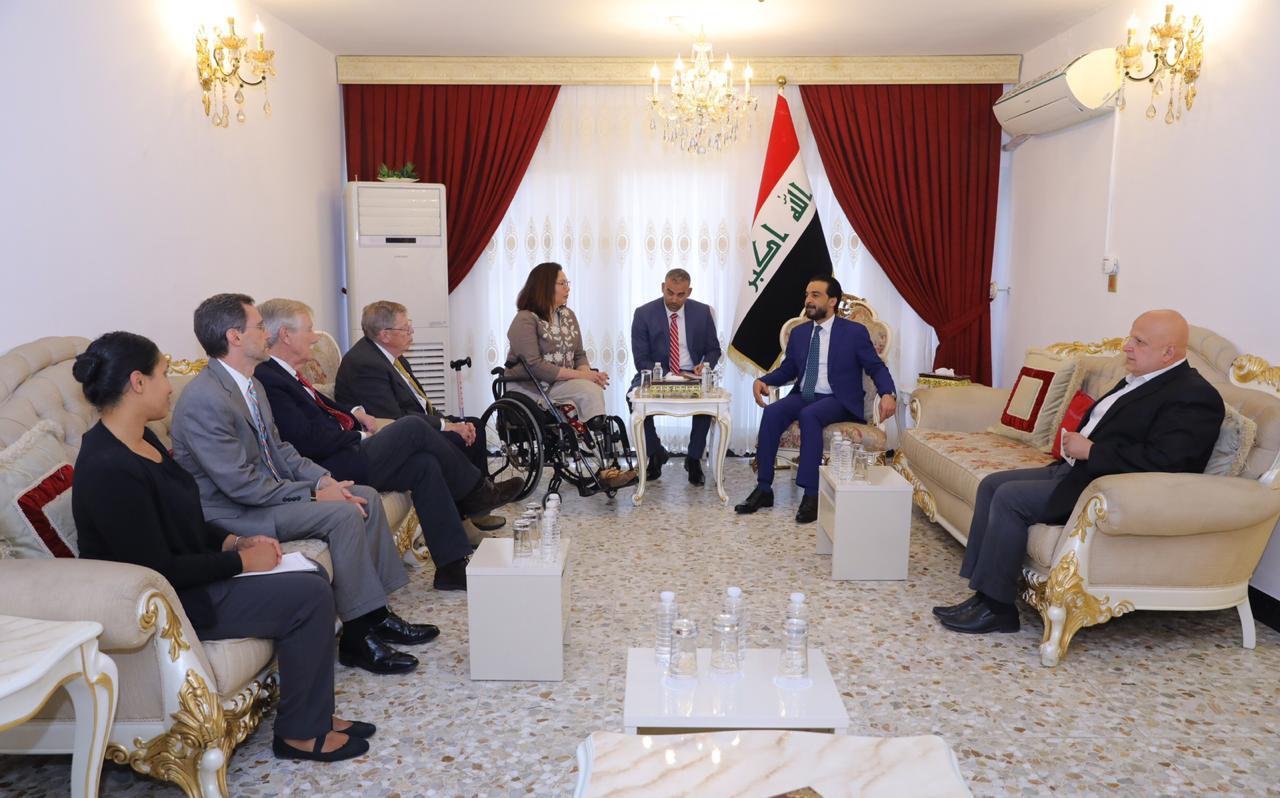 Baghdad – Mawazine News
President of the House of Representatives, Mohammed Halbusi, on Wednesday, called on US companies to enter the work in Iraq and contribute to the reconstruction of infrastructure for liberated areas or those that lack services.
The Information Office of the Speaker of the House of Representatives, in a statement received / Mawazine News / copy, that “Halbusi, received a delegation from the Committee on Foreign Relations in the Senate, including both Senator Mt Romney of the Republican Party, and Senator Chris Murphy of the Democratic Party, Chargé d’Affaires of the US Embassy in Iraq.
“The meeting discussed the continued security cooperation between Baghdad and Washington; to eliminate the cells of the organization calling for the terrorist, and to provide assistance; to return the displaced to the liberated areas and achieve stability.”
He called on US companies to “get into Iraq and contribute to the reconstruction of liberated or underserved areas.”
For his part, the visiting delegation expressed “the aspiration of the United States of America to be a strong partner and prosperous; to play its regional role in the region,” asserting “their support for Iraq in all fields.”

Iraqi Foreign Minister Mohammad Ali al-Hakim signed a memorandum of understanding with the Gulf Cooperation Council on Wednesday for political consultations.
“The wise minister received the secretary-general of the Gulf Cooperation Council, Abdullatif bin Rashid al-Zayani, and the two sides discussed the special relations of Iraq with the GCC countries and ways to raise them to meet the aspirations of our Arab peoples,” the Foreign Ministry said.
“The two sides signed a memorandum of understanding for political consultations, which allows for regular dialogues on issues of common concern,” the statement said.
The Iraqi Foreign Minister, according to the statement on the depth of relations between Iraq and the GCC states, noting that “we have strong relations with the Gulf Cooperation Council countries.”
Al-Hakim said that “these visits contribute to strengthening ties and achieving mutual cooperation among the countries of the region, noting that” we cherish the visits of brothers from the Gulf Cooperation Council countries because they contribute to the exchange of views and listen to their views and to inform them of progress in Iraq, Stressing that “the security and safety of the Gulf is the security and safety of Iraq.”

On the Arab issue, the Iraqi Foreign Minister expressed Iraq’s aspiration to end the Yemeni crisis by peaceful means and to form a national unity government that will strengthen the unity and integrity of Yemen as a whole.

(Baghdad: Al-Furat News) Speaker of the House of Representatives Mohamed Halboussi, on Wednesday, the provision of services through investment opportunities and the entry of companies to work in Iraq.
“The Halabousi received a delegation from the Senate Foreign Relations Committee, which included Senator Mt Romney of the Republican Party, Senator Chris Murphy of the Democratic Party, and in the presence of the Chargé d’Affaires US Embassy in Iraq, Joe Hood. ”
“The meeting discussed the continuation of security cooperation between Baghdad and Washington; to eliminate the cells of the organization calling for the terrorist, and to provide assistance; to return the displaced to the liberated areas and achieve stability and reconstruction of Iraq.”
He called Halabousi “the need to support the Iraqi government in providing the requirements for the implementation of the government program, and provide services through investment opportunities and the entry of companies to work in Iraq.”
The statement added that “the visiting delegation expressed the aspirations of the United States to be a strong and prosperous partner of Iraq after his victory on the organization to advocate the terrorist efforts of his armed forces and the sacrifices of his sons, and we had the honor of supporting Iraqi forces to this task, stressing” their support for Iraq in all fields. “
http://alforatnews.com/modules/news/article.php?storyid=196184

(Baghdad: Al-Furat News) The Office of the Supreme Religious Reference Imam Ali al-Sistani issued a forecast for the month of Ramadan.

On Tuesday, the 7th of May, it will be the first day of Ramadan.

The office of the supreme authority often invites the Muslims to observe the month of Ramadan a day before the end of the month of Sha’baan, and if it is seen, the first of the holy month is specified, otherwise it is the completion of several of the two peoples.

The President of the Republic, Barham Salih, during his meeting with US Senator Tammy Duckworth on Wednesday that Baghdad and Washington should play an influential role in the stability of the region and achieve peace.

“Saleh, received at the Peace Palace in Baghdad, US Senator from the Democratic Party Senator Tammy Duckworth and the accompanying delegation, in the presence of US Charge d’Affaires Joe Hood,” said a presidential statement received by Mawazine News.

Saleh stressed that “the two countries should play an influential role in stabilizing the region and achieving peace and prosperity for their people,” praising “the role of the United States in the international coalition against terrorism and its contribution to upgrading the capabilities of the Iraqi security forces armament and training.”

In addition, the members of the delegation renewed “the support and support of the United States of Iraq to the people and government to achieve its aspirations, stability and prosperity and restore its role in the region and the world.”

The Secretariat of the Council of Ministers addressed a letter to the House of Representatives to appoint two persons to manage the office of Prime Minister Adel Abdul Mahdi and the Acting Council Secretariat.

The Cabinet, in accordance with a document issued by the Cabinet Secretariat and addressed to the Council of Representatives, recommended the appointment of Mohammed Abdel Reda Abdel Hamid as Director of the Office of the Prime Minister and Hamid Naim Khudair Al Ghazi as Secretary General of the Council of Ministers.

The document states that the request comes “to assign them to the two posts assigned to them, pending their original appointment, on the basis of the provisions of article 80 / item V of the Constitution”.