Skip to content
HomeTalabani to US delegation: Fighting terrorism needs to change the policy of the regions 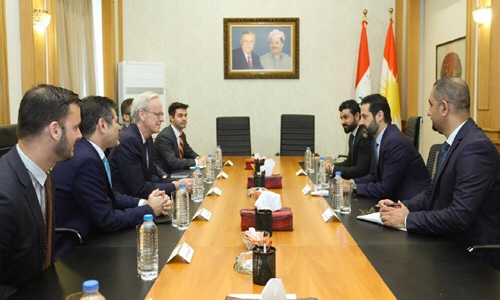 (Baghdad: Al-Furat News) Kubad Talabani, Vice President of the Kurdistan Regional Government, discussed with a high-ranking US official the political situation and the post-defeat phase calling for the terrorist in the region.

According to the statement, Talabani received a high-level US delegation headed by William Robock, deputy envoy to the International Coalition Against Da’ash, on Tuesday, accompanied by Consul General in Arbil, Steven Vijn.

During the meeting, the two sides discussed the reconstruction of the areas affected by the terrorist advocate. The two sides agreed on the need to deal with this issue with caution and to be well managed in order to achieve their objectives in restoring security and stability to those areas.

For his part, the visiting delegation highlighted the situation in Syria, which is aimed at stability, despite the sensitive situation in it, pointing out that this is a good indication of the security situation in Iraq and the Kurdistan region, which has borders with Syria.