Skip to content
HomeUS Embassy: We have no bases in Iraq and we will not use its territory to attack any country 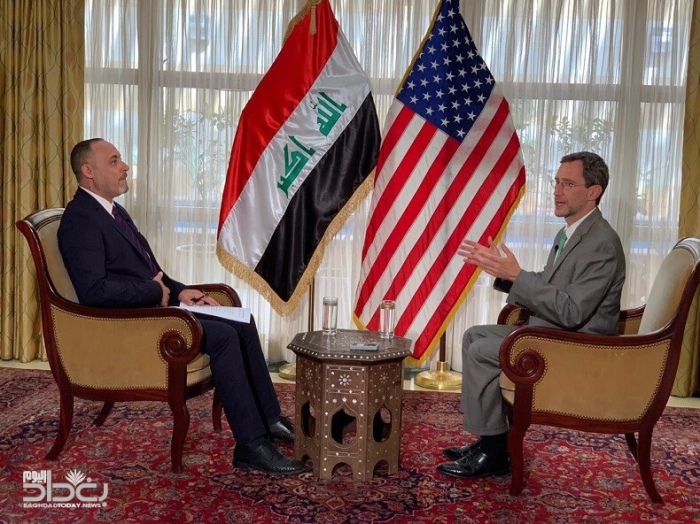 On April 20, 2019, US Charge d’Affaires in Iraq, Joe Hood, revealed the number of US troops inside the country, pointing out that his country does not have any military bases here.

“We have between 5,000 and 6,000 US troops in Iraq, in coordination with his government, to train Iraqi forces,” said HOOD in the program, “Point of View” with Dr. Nabil Jassim .

“We have provided a billion dollars to the border guards in the areas of training and armament and provide logistical and important information to Iraqi forces, especially the air force leadership,” he said. “The prime minister wants the US to stay inside the country.”

He pointed out that “the US forces withdrawn from Syria did not enter Iraq, but went to other countries in the region and others, and we are ready to meet any Iraqi request to strengthen, or reduce the number.”

“We do not have special bases in Iraq, but we work in Iraqi bases in cooperation with Iraqi forces.”

“I spoke with political blocs and political leaders, and they want to continue the role of the international coalition in Iraq according to the framework framework agreement.”

“We will not use Iraq to attack other countries at all,” he said, adding that “the three presidencies in Iraq support the continuation of US partnership with Iraqi forces.”

The President of the House of Representatives Mohammed Halbusi, “said from Iran that the presence of the international coalition is necessary The President also stressed that the relationship with the United States must be established,” adding that “the Prime Minister also said that the presence of US forces at the request of the Iraqi government and the relationship With Washington essential. ”