(Baghdad: Al-Furat News) Prime Minister Adel Abdul Mahdi, the great historical position of the Supreme Religious Reference Grand Ayatollah Imam Ali al-Sistani by declaring the fatwa of the holy jihad, which started at the right moment between collapse and victory.

“I salute on behalf of myself, the Iraqi government and our struggling people the memory of the great historical position of the supreme religious authority, Sayyid al-Sistani, by declaring the fatwa of Jihad Al-Kafiyy, which was launched at the right moment between the collapse and the victory,” Abdul Mahdi said in a statement. Decisive and pivotal turning point in the face of the massive attack on the organization of calling the terrorist and occupation of three provinces and precious areas of the land of Iraq and the displacement of millions, and approached the approach to Baghdad and the threat of holy cities.

“The masses of millions of our people who responded to the fatwa of the holy jihad formed an impenetrable dam to protect Iraq, which was then threatened by my presence. They stood beside their heroic forces of all kinds and formations in the biggest epic of resistance and sacrifice and the victory that united all Iraqis. National, legal and humanitarian, and saved their country, region and world from the threat of intimidation. ”

“Greetings to the souls of the martyrs of Iraq and the wounded and every fighter and volunteer in defense of Iraq, and to the families of martyrs and wounded, and Iraq and its people lived a secure and stable and prosperous victor.” 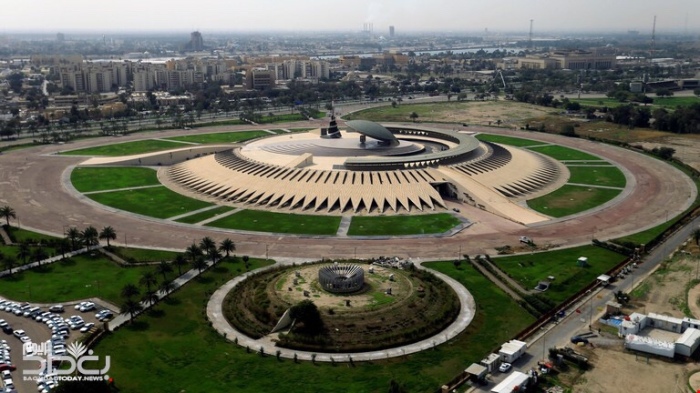 The head of the block of parliamentary solution Mohammed Karbouli, on Friday, the Baghdad summit of parliaments of neighboring countries, which will be launched, on Saturday.

“The Iraqi neighborhood summit embodied the complementary work of the three presidencies that worked in the spirit of one team in the file of foreign relations,” Karbouli wrote in a twitter comment on his Twitter account.

“Iraq’s interest lies in other sub-interests,” he said.

The Deputy Speaker of the House of Representatives Bashir Haddad said earlier Friday that the Baghdad Summit of the parliaments of the neighboring countries, which will be launched on Saturday, “a valuable opportunity” to establish strategic partnerships security and economic with the participating countries.

The delegations of countries invited to participate in the Baghdad Summit of the parliaments of neighboring countries began to arrive in the capital, earlier on Friday, and was received by House Speaker Mohammed Halbusi and his two deputies. 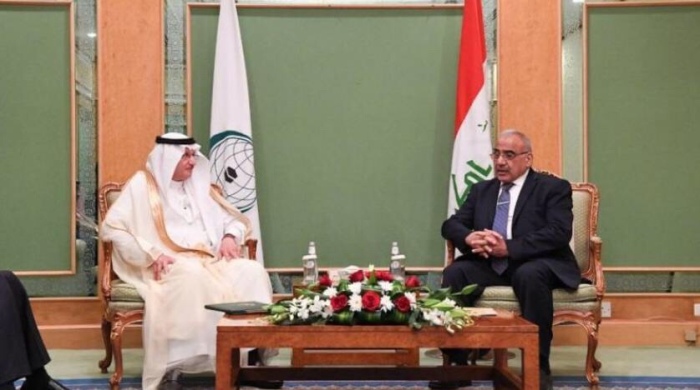 A meeting of the Prime Minister of Iraq, Adel Abdul Mahdi, the Secretary-General of the Organization of Islamic Cooperation, Dr. Yousef Al-Othaimeen in Jeddah (SPA)

Iraqi Prime Minister Adel Abdul Mahdi said that the situation in his country has become safe and normal, praising the efforts of the Organization of Islamic Cooperation with his country during the last period.

“Today, Iraq is not like yesterday,” Abdul-Mahdi said during a meeting in Jeddah on Thursday with the Secretary-General of the Organization of Islamic Cooperation, Dr. Yusuf al-Othaimeen, adding that Baghdad was “constantly receiving friendly and friendly delegations.”

“The most important thing for us is to work on building and rebuilding Iraq and establishing the best relations with the neighboring countries and the Arab and Islamic countries,” he said, stressing that they were “serious about implementing the agreements signed in Saudi Arabia.”

He called on the Iraqi Prime Minister to continue fighting extremism and terrorist ideology and uprooting it “to the danger to the security of our countries and our peoples.”

He stressed the important role played by the Organization in promoting joint Islamic action, pointing to Baghdad’s keenness to strengthen its relationship with the organization that “supported Iraq and its people”.

For his part, congratulated the Secretary-General of the Organization Prime Minister of Iraq «the formation of the government and the success of its direction and policy in the openness to the Arab and Islamic environment, and the stability of Iraq after the victory on the organization of calling the terrorist who offended Islam and Muslims», expressing confidence that the new Iraqi government «More security, stability and prosperity for the Iraqi people».

Al-Othaimeen said that «Iraq is an institution and we rely heavily on its role and its history and depth of civilization, and we are happy for its stability and prosperity», adding: «continue to support to take the place it deserves».

He pointed to the organization’s keenness to develop strong relations with Baghdad for the good of the Islamic Ummah, and said: “We will spare no effort in supporting and supporting Iraq, especially at this important stage in which efforts to rebuild the areas destroyed by the war.”

He pointed to the seriousness of terrorism and its thinking on the region, considering it “plague of the times” that everyone must face. 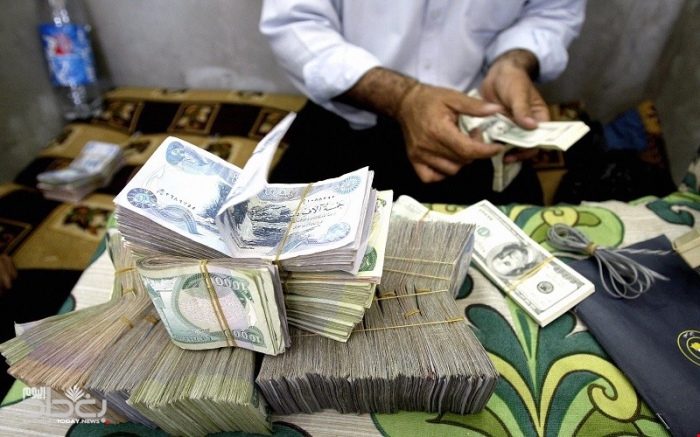 The Ministry of Finance in the Kurdistan region, on Friday, a new schedule for the distribution of salaries in January last, for the staff of the region.

The ministry said in a statement that “the salaries of the ministries of electricity, transport and communications, planning, municipalities and tourism, agriculture, as well as the Office of Financial Supervision, Human Rights, Environment Agency, the Electoral Commission, Will be disbursed next Sunday. ” 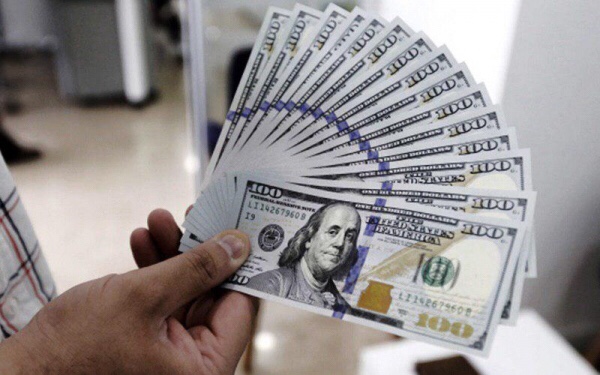 The price of the market in the stock market in Baghdad 1200 dinars to the dollar, or 120 thousand dinars for one hundred dollars, the same price since last Saturday.

The prices of buying and selling dollars in banking companies were:

the selling price of one dollar 1205 dinars, or 120 thousand and 500 dinars per hundred dollars.

The purchase price of the dollar is 1195 dinars, or 119 thousand and 500 dinars per hundred dollars.

Currency, gold and oil {even prepare this news}: 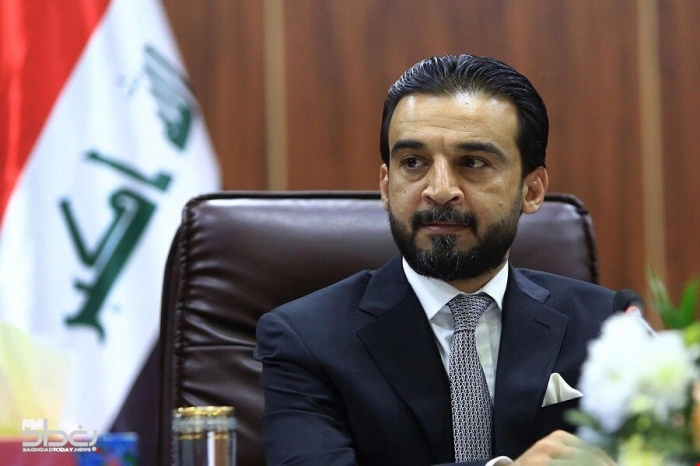 The Speaker of the House of Representatives, Mohamed Halboussi, welcomed Friday (19 April 2019), the Arab and Islamic delegations coming to Baghdad, in conjunction with the preparation of the summit of Parliaments of neighboring countries.

Al-Halbusi said in a tweet through his account on Twitter, that “Iraq, proud of the proud father of terrorism is honored to attend his neighbors in Baghdad Arabism, Islam and peace.”

He added that the Baghdad summit is a summit of “stability and development.”

The Baghdad summit of parliaments of neighboring countries will be held in Baghdad on Saturday, 20 April 2019, in the presence of delegations from Iran, Saudi Arabia, Kuwait, Turkey, Jordan and Syria.

“Iraq is a safety valve for the entire region and hosting Baghdad for Arab parliaments is a proof of Iraq that has risen vigorously and resolutely for its people. Today, it is hosting the parliaments of the neighboring countries and exercising its leadership role in a strong and fair way with all the guests,” MP Mansour al-Baiji said in a statement. Baghdad peace “.

“We welcome the upcoming parliamentary delegations to Iraq, who are keen to attend the peace in Baghdad, which is a platform for closer relations between the neighboring countries and a guarantee for the convergence of visions in the interests of the peoples of the region and to strengthen stability and strengthen the bonds of cooperation,” Gamalawi said. Between the legislative authorities in these States. ”

“The convening of the parliamentary conference in Baghdad achieves significant political and moral gains expressed by the heads of the parliaments of Iran, Turkey, Saudi Arabia, Jordan, Syria and Kuwait to the initiative of President Halabousi to come to Baghdad, which has been relieved of the burdens of difficult circumstances,” the statement said. Over the past years, and their belief in the role of Iraq and the restoration of the central role in the region. ”

According to the statement of Parliament, “The convening of the summit in Baghdad gives a clear picture of the recovery of Iraq and the development of the democratic process through the commitment to constitutional entitlements through the holding of elections on time and the emergence of the three presidencies (Parliament, the Republic and the government) with the high state of harmony between the parliamentary blocs to be a platform for closer relations between countries Good neighborliness and a bridge for convergence for regional solidarity “.