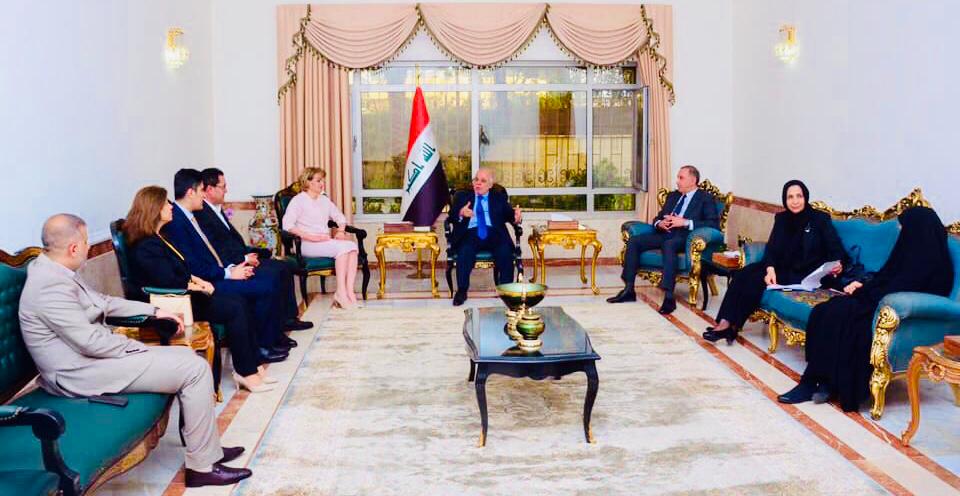 BAGHDAD – Mawazine News
The head of the victory alliance Haider al-Abadi, on Monday, with a delegation of the new generation movement to coordinate and unify the positions of the parties in the House of Representatives and future benefits.
“The latter received the delegation of the new generation movement headed by Sarwa Abdel Wahid and in the presence of a number of deputies of the victory coalition and discussed the latest political situation and assess the government and parliamentary performance and understanding and coordination between the coalition and the new generation and unify positions. The House of Representatives and in future benefits. ”
The statement added that “it was stressed the importance of standing strongly against mistakes and the decline in some joints and the orientation to build a state institutions to provide services to citizens.”

(Baghdad: Al-Furat News) Iraq receives all the approvals of the heads of parliaments of neighboring countries to attend the Baghdad summit next Saturday, the twentieth of April.
A source from the Office of the President of the House of Representatives Mohamed Halbusi told the {Euphrates News} that “under the slogan of” Iraq .. stability and development}
will be held in Baghdad on April 20 at the parliaments of neighboring countries {1 + 6}, at the invitation of Halbusi.
The source promised this summit “a precedent in Baghdad, where will be shared by [Saudi Arabia, Iran, Syria, Turkey, Jordan and Kuwait].”
“All delegations will arrive in Baghdad on April 19,” he said
http://alforatnews.com/modules/news/article.php?storyid=195307

MP stressed the coalition of construction Charter Ibrahim, Monday, that the political blocs agreed among themselves to pass the remaining ministries in the coming days after the completion of the resolution of the permanent parliamentary committees.

“All the political differences on the Interior Ministry between the coalition of reform and construction have been exceeded and come out with a result that satisfies all parties,” she said, pointing out that “education and defense got a preliminary agreement between the Sunni blocs, as well as the Kurdistan Alliance agreement The candidate of the Ministry of Justice. “

“The political blocs agreed fully to pass the remaining ministries to Prime Minister Adel Abdul Mahdi in the coming days after the completion of all the presidencies of permanent parliamentary committees.”

The deputy of the Reform Alliance, Zahra Hamza, on Monday, the existence of “sharp differences” witnessed by the process of voting on the parliamentary committees, indicating that the differences within the committees is not on the granting of blocks of parliamentary maturity, but return to the persons nominated for the presidency of the Commission for lack of jurisdiction.

{Baghdad: Euphrates News} kicked off, on Monday, the events of the Baghdad International Flower Festival with the participation of {15} Arab and foreign countries and dozens of companies and agricultural offices and provinces of Iraq.
A statement by the secretariat of Baghdad, received the agency {Euphrates News} a copy of it, that “under the slogan of” Baghdad is planting flowers .. and embrace creativity “kicked off the events of the 11th Baghdad International Flower Festival, which lasts for (5) days on the gardens of Al Zora Park.
He added that “the opening ceremony witnessed a high official presence among the countries of {Jordan, Syria, Egypt, Sudan, Kuwait, Bahrain, the United States, the United Kingdom, Germany, the Netherlands, Turkey, Iran, Austria and Czech} along with the wings of Iraqi provinces and local companies and municipal departments and the Department of Parks and Forests of the Secretariat of Baghdad.
“The festival includes a number of artistic and folklore events, flower exhibitions, activities and competitions for children,” he said. “The festival is an opportunity to exchange experiences in the agricultural sector and to learn the latest methods used in the field of plant breeding and breeding.”
He continued, “The secretariat of Baghdad assesses this annual tradition and its own potentials in order to plant joy in the hearts of Baghdadi.”

The Supreme Committee of the Ministry of Defense and the Ministry of Peshmerga in the Kurdistan Regional Government in a meeting of them, on Monday, in Arbil, an agreement on the presence of forces of the two sides in the disputed areas.

The chief of staff of the Peshmerga forces Jamal Imniki on the meeting, the committees conducted a comprehensive survey of Khanaqin to the west of the Tigris, indicating that after the completion of the work of the committees will be clearly identified places Peshmerga and the Iraqi army.

The move comes from Erbil and Baghdad as the first practical step for the return of the Peshmerga forces to the disputed areas, and is expected to hold a series of other meetings after this meeting.

After the events of October 16, 2017, the Iraqi security forces of different types manage the disputed areas individually, which is considered by the Kurdish circles as a threat to the rights of components and a precondition to the security of the region, but there are current attempts to restore the Peshmerga within the framework of a planned map to some Of those areas.

(Baghdad: Al-Furat News) embracing the capital Baghdad, the conference of parliaments of neighboring countries next Saturday.

A statement by the Information Department of the House of Representatives, received the agency {Euphrates News} a copy of it, that “under the slogan of (Iraq .. stability and development), and at the invitation of the Speaker of Parliament Mohammed Halbusi, Baghdad will host a conference of Parliaments neighboring Iraq on Saturday.”

(Baghdad: Al Furat News) The House of Representatives ended its tenth session of the second legislative term for the first legislative year in the fourth parliamentary session under the chairmanship of Mohammed Al Halbusi, the President of the Council, on Monday, in the presence of 194 deputies to read the first draft bills.

At the beginning of the session, which was chaired by First Vice-President of the Council Hassan al-Kaabi, part of them and drew to hold intensive meetings with the heads of parliamentary blocs in order to speed up the decision to name the heads of committees and their deputies and rapporteurs, calling the winning members who did not take the constitutional oath of membership of the House of Representatives to accelerate the oath to ensure the exercise of their role As effective as their fellow MPs.

The Council concluded the first reading of the draft law of the Ministry of Communications and Information Technology, submitted by the services, reconstruction, culture, information, tourism and archeology committees for the purpose of developing the Ministry of Communications and Information Technology and defining its tasks and establishing and developing infrastructure for telecommunications, information technology, postal and savings services, Internet services of all kinds, developing telecommunications services and keeping abreast of technological development. And the implementation of the general policy of the state in these sectors and the exploitation of material and human resources in order to increase and improve services and raise the level of performance and organization of work in Communications and acts of worship of information technology and determine the organizational structure of the Ministry.

The Council decided to postpone the first reading of the draft law of the first amendment to the law of the Ministry of the Interior No. 20 of 2016, submitted by the Security and Defense Committee with a view to reviewing the ministry’s formations and their level of coordination in accordance with the legal system of administrative organization.

The Council then completed the first reading of the draft law on the accession of the Republic of Iraq to the Convention on Minimum Standards for Social Security No. 102 of 1952, submitted by the Committees on Foreign Relations, Labor, Social Affairs, Migration and Displaced Persons in order to secure the minimum standards of social security for workers in the Republic of Iraq and to accede to the Convention Which entered into force on 27 April 1955.

Al-Kaabi called on deputies to resolve the issue of the heads of parliamentary committees and their deputies and rapporteurs and facilitate the task of holding presidential elections in order to provide legislation that contributes to the service of citizens.

For his part, the Speaker of the House of Representatives postponed the reading and discussion of the draft traffic law submitted by the Security and Defense Committee at the request of the concerned committee to the next session.

It was then decided to adjourn the meeting until next Wednesday

The private director of the Association of Iraqi Private Banks, Ali Tariq, said the increase of government and private deposits in commercial banks operating inside Iraq to 76.89 trillion dinars during the year 2018.
Tariq said, “Government and private deposits in commercial banks rose 9.84 trillion dinars in 2018 because of the bank’s procedures The Iraqi Central Bank in support of the Iraqi banking sector, both government and private, in addition to Iraq rid of the financial crisis that hit in 2014 because of the fall in oil prices and security improvement after the elimination of the organization calling, “noting that” deposits in 2017 amounted to 67.05 trillion dinars What rose in 2018, to 76.89 trillion dinars. ”
He added that “private sector deposits in commercial banks amounted to 27.36 trillion dinars, while government deposits amounted to 22.27 trillion dinars in addition to deposits of the public sector sector amounting to 27.26 trillion dinars.”
He stressed that “the relationship between the citizen and the banking sector is witnessing a significant improvement after the actions of the Central Bank of Iraq, such as the settlement of salaries of employees in the public and private sectors and facilitate the procedures of bank cards and others,” adding that “Another factor is the integration of Iraq in the global economy, which depends mainly on transactions With the banking sector in addition to the increasing geographical spread of banks through the increase in the number of branches after the awareness programs, as well as increasing the proportion of financial coverage through the provision of electronic payment tools and their impact in attracting the mass of cash.
He pointed out that “the coming years will witness an increase in deposits after the launch of deposit insurance company by the Central Bank of Iraq.”

President of the Republic Barham Salih received at the Peace Palace in Baghdad on Monday British Secretary of State for International Trade Liam Fox and his accompanying delegation.

During the meeting, the two sides reviewed the relations between Iraq and Britain, especially in trade and economic fields, and the need to expand them to serve the interests of the two countries and achieve the aspirations of the two friendly peoples.

The president praised the British support for Iraq in its fight against terrorism, stressing “the strengthening of bilateral relations and the exploitation of investment opportunities and the contribution of international companies in the reconstruction of liberated cities.”

In turn, “the British minister renewed his country’s support for Iraq in various fields,” noting “the United Kingdom seeks to promote economic and trade cooperation between the two countries.”