“The presence of major international companies in Iraq and the presentation of their qualitative product represents a first step on the road to recovery of the national economy,” said Jamil Antoine, vice president of the Baghdad Forum.

He pointed to the depth of the relationship between Iraqi and Japanese economists and today there is a tendency to restore confidence between the two parties, especially with a company that is an important sign in the global market.

Toyota announced Iraq’s official distributor in Iraq for the Toyota and Hino Japanese products, unveiling the new generation of the Toyota Corolla and Toyota RAV for 2019.

A statement from the company said that the Iraqi market represents an important trend for its products, and there is consensus in the visions between the company’s product and the local market for decades, and so cooperation is beneficial and beneficial to both parties of the process, especially as the company maintains the forefront of sales globally.

The statement added that Toyota Iraq continues to insure the supply of all kinds of Toyota vehicles, including the new RAV 4 and the new Corolla, through the showrooms of agents accredited in Iraq, taking care to include the sales of Toyota with a guarantee of three years or until the distance of 100,000 thousand kilometers .

got the American Textron Inc., a contract worth $ 15.3 million to renovate 15 Iraqi training aircraft T-6A.

“The new contract is an extension of a timetable for a grant contract in the past until July 31 for the reconstruction of aircraft, the installation of equipment and the refurbishment of fuel cartridges,” UBI said in a news release.

“Iraq had purchased the first group of eight T-6A training aircraft in August 2009 to replace the Iraqi Cessna aircraft fleet, where the aircraft is used by the US Air Force for basic training Pilots and training officers on combat systems. ” Ending / 25 z

The deputy of the Fatah Alliance Mohammed al – Baldawi, on Thursday, the existence of parliamentary movement to display the cabinet cab remaining for Prime Minister Adel Abdul – Mahdi to vote in the session next Saturday.

Al-Baldawi said in a statement to Al-Mawloumah that “the Fatah and Allawi parties ended all disputes related to the Interior Ministry candidate and the matter was resolved.” He pointed out that “differences are currently confined to the Ministry of Defense, Education and Justice.”

The House of Representatives has lifted, on Wednesday, the eighth session of the second legislative session held today to Saturday. End 25 T 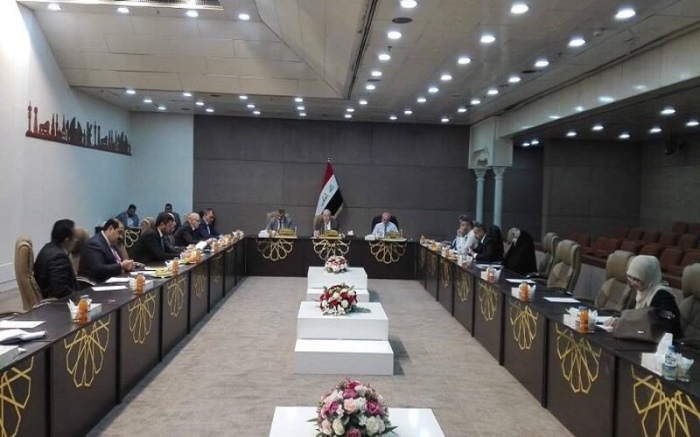 The Parliamentary Finance Committee on Thursday set a meeting date for all governors to find out the real reasons behind the disruption of the federal budget for 2019.

The Committee member Siham Shannon said in a statement to the Information Center that “on Sunday of next week set for meeting all the governors to find out the real reasons behind the failure to implement the provisions of the federal budget in ten provinces,” noting that “the meeting will include Kurdish conservatives and officials of the Ministry of Finance and Planning” .

She added that “the Ministry of Planning informed the Finance Committee that only five provinces have submitted their plan and the disbursement of funds in full to implement the plans set,” noting that “most of the provinces have not yet sent plans to ministries of planning and finance.”

She explained that “the meeting will resolve all those obstacles to the implementation of the budget fully without disrupting it for another period.”

Iraqi President Barham Saleh on Thursday reiterated his country’s firm stance on not accepting that Iraq would be the starting point for any action that would harm its neighbors or strain the regional situation.

During his meeting with Iran’s ambassador to Iraq, Erj Musjidi, the Iraqi president called for “easing tension in the region and stressing the participants in fighting extremism and terrorism and ensuring a prosperous future for the peoples of the region.”

“The importance that Iraq attaches to strengthening its bilateral relations with Iran stems from social and cultural ties and common security and economic interests, and we appreciate Iran’s support for Iraqi forces in its war against the terrorist advocate,” he said.

“Iraq is keen to be an arena for meeting the interests of the countries and peoples of the region and will not accept to be the starting point for any action that would harm its neighbors or straining the regional situation.”