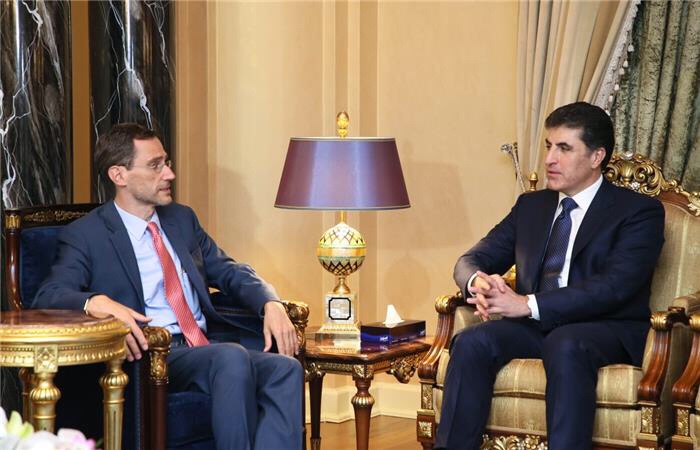 The Prime Minister of the Kurdistan Region, Nigervan Barzani, received on Tuesday evening, Joe Hood, coordinator of the US Embassy in Iraq, Steve Vakn, US Consul General in the Kurdistan Region, Max Bremorak, special adviser to the US Department of Components and a political delegation and diplomat accompanying them.

During the meeting, the delegation evaluated the assistance of the Kurdistan Regional Government for displaced persons and refugees in order to escape the oppression of terrorism and to protect all components without discrimination. The two sides also stressed the interest in helping the components that abandoned their land and its citizens because of attacks until the resumption of security and stability in their areas.

On the other side of the meeting, they discussed the formation of the new cab of the Kurdistan Regional Government and the steps taken in this direction so far, the relations of Erbil – Baghdad and the steps to solve the problems between the parties through dialogue and negotiation, fears of a resurgent return to appear in some areas and joint work between Erbil And Baghdad in this regard.

And occupied the discussion in the conditions of the region and topics related to the improvement of the economic aspect of the Kurdistan Region another aspect of the meeting.