Not long ago, ISIS controlled a vast amount of territory in the Middle East—we have now defeated its “caliphate.” The U.S. will continue to closely monitor the remnants of ISIS and continue to work alongside our Coalition partners to prevent any resurgence. 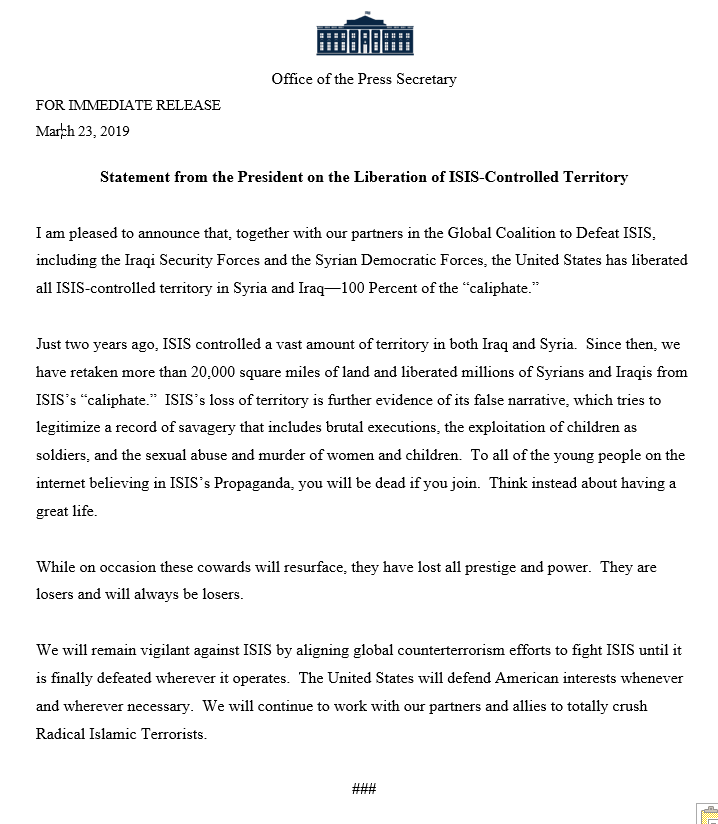 BAGHDAD (Reuters) – The US Central Command announced on Saturday that its forces were carrying out seven security missions in Iraq.

“The Joint Task Force is in the process of firm resolve to provide advice and support to the Iraqi security forces in seven key security areas: security policy, security operations, training, sustainability, intelligence, counterterrorism and aviation,” the command said in a statement received by the Euphrates News Agency today.

“More than 189,000 Iraqi troops have been trained by coalition forces, which means thousands of police, border guards, soldiers and pilots to protect their country.” It is worth noting that Iraqi trainers are now undertaking most of the training during the qualifying phase Self. “Finished

(Baghdad: Al-Furat News) Speaker of the House of Representatives Mohamed Halbousi discussed with the Ambassador of the United Arab Emirates Hassan al-Shehhi to support stability in Iraq.
A statement from his office, received by the {Euphrates News} copy, that “the ambassador of the UAE offered his condolences to the country for the sinking of the ferry in the city of Mosul and condolences to the families of the victims, expressing the support of the United Arab Emirates to the Iraqi government and people.
He added that “during the meeting, they discussed bilateral relations between the two countries, cooperation in the file of reconstruction and the return of displaced people, and supporting stability in Iraq, which will contribute to the stability of the region.”
Al-Halbousi praised Al-Shehhi’s efforts on the occasion of the end of his duties in Baghdad by strengthening bilateral relations during his tenure as ambassador to Iraq, wishing him success in his new duties. He stressed Iraq’s keenness to build the best relations with the UAE in the interests of the two brotherly peoples.

ERBIL – The Kurdish-led Syrian Democratic Forces (SDF) officially announced on Saturday the full victory over the jihadist group of Islamic State (IS) in Syria as the Kurdish fighters had launched an operation to liberate the last territory of the militant group in the country.

“Syrian Democratic Forces declare total elimination of so-called caliphate and %100 territorial defeat of ISIS,” Mustafa Bali, a SDF spokesperson, said in an online statement on his Twitter account, using a different acronym for the IS.

The US-backed Kurdish forces have been the backbone of the war against the insurgents in Syria and they lost thousands of fighters in the past few years.

“On this unique day, we commemorate thousands of martyrs whose efforts made the victory possible,” Bali added.

The SDF had lately intensified their efforts to free the final IS pocket in the Syrian eastern province of Deir ez-Zor where thousands of jihadists with their family members earlier the month surrendered to the Kurdish forces.