Al-Anbar: Al-Furat News The deputy commander of Anbar operations in the popular crowd, Ahmed Nasrallah, confirmed the security alert on the Iraqi-Syrian border.
“After the advance of Syria’s democratic forces against the Iraqi-Syrian border and its ongoing battles with a fugitive in Baguz, east of Syria,” the last terrorist pocket in Syria, Nasrallah told the Euphrates News.
He pointed out that “the popular mobilization forces and the Iraqi army and the federal police, as well as the arms and the efficiency of high and finite finite ready to prevent the arrival of Alasash and proximity to the Iraqi border and monitor their gatherings and movements in this region.”
A military source said that the artillery of the Iraqi army bombed on Tuesday evening, the village of Al-Bagouz in the province of Deir al-Zour east of Syria and close to the Iraqi border, the last pocket of gangs to support the terrorist in the neighboring country.
An impending defeat is looming in the last pocket under his control with the surrender of hundreds of terrorists and their families. The US-backed democratic forces of Syria said the battle was in the “end sentence.”
By .. حميد الفهداوي
http://alforatnews.com/modules/news/article.php?storyid=191505
Advertisement

ERBIL – Iraqi PM Adil Abdul-Mahdi has appreciated the presence of the US-led international coalition forces in Iraq, hailing their role in combatting terrorism, the premier’s office said in a statement on Thursday.

Abdul-Mahdi made the remarks during a phone call with the UK Foreign Secretary Jeremy Hunt on Thursday where the Iraqi leader reaffirmed his country’s keenness to develop relations with the UK and further cooperations in the fight against terrorism, providing stability, and improving economic prosperity.

The Prime Minister stressed Iraq’s keenness to develop relations with Britain and to continue the cooperation in the field of combating terrorism and achieving stability and economic prosperity, the statement added.

The Iraqi prime minister further pointed out that his government places priority on opening trade channels with the neighboring countries and establishing a network of relations that will serve the security and stability of the peoples of the region.

Concerning the presence of the coalition forces, however, Abdul-Mahdi noted that the foreign forces provide military training and advice to the Iraqi forces and that they are in Iraq at the invitation of Baghdad while there are no military bases for the foreign troops.

“Iraq is a democratic country with many opinions and positions on various issues of interest to the country,” the statement concluded.

The Prime Minister, Adel Abdul Mahdi, received a phone call from British Foreign Secretary Jeremy Hunt, in which he affirmed the support of the Iraqi government and its support for its efforts to consolidate security and stability and strengthen Iraq’s status in its Arab, regional and international environment. He also congratulated his sovereignty on the presidency of the government.
The Prime Minister stressed Iraq’s keenness to develop relations with Britain and continue cooperation in the fight against terrorism and achieve stability and economic prosperity.
He added that the Iraqi government places priority on opening neighboring countries and establishing a network of relations to serve the security, stability and development of the peoples of the region, where we recently received officials from neighboring countries, including the Iranian president and the Saudi minister of trade.
On the position of the presence of coalition forces in Iraq, the Prime Minister stressed the government’s appreciation of its role in combating terrorism and providing training and advice, and that it exists at the invitation of the Iraqi government and move with its consent and that there is no foreign military bases and there is no other targets for these forces only to fight and encourage the training of Iraqi forces, A democratic state with multiple views and positions on various issues of interest to the country.
http://alforatnews.com/modules/news/article.php?storyid=191721 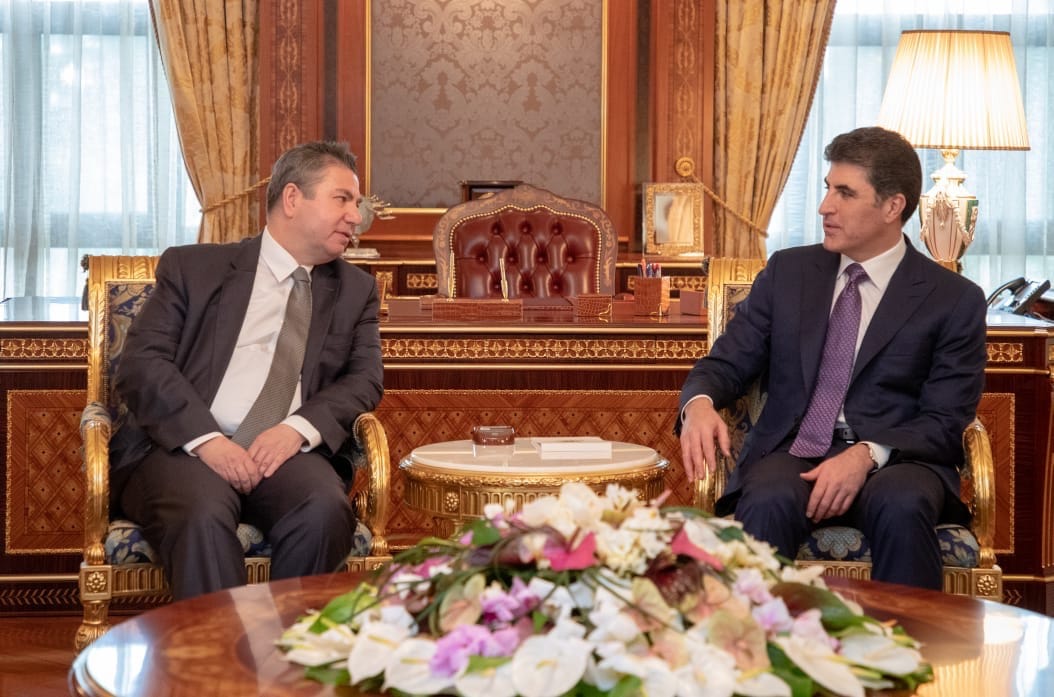 Baghdad –
The government of Kurdistan, on Thursday, expressed readiness to begin serious dialogue to resolve the remaining problems with Baghdad with the help of friendly countries.
The media office of the Kurdistan Region’s Prime Minister, Nigervan Barzani, said in a statement received by “Mawazin News” that the latter “received today, the Deputy Minister of Foreign Affairs of Turkey, and a delegation accompanying him.”
Barzani said during the meeting that “the Kurdistan region always looks forward to building good relations with its neighbors, especially with Turkey, which helped and supported the Kurdistan region in difficult times,” pointing out “the willingness of the Kurdistan government to further develop these relations in all areas, Economy and trade “.
The Prime Minister of Kurdistan, “the relations between Erbil and Baghdad, and the efforts of Adel Abdul Mahdi, the Iraqi prime minister, the last to solve the problems between Arbil and Baghdad.”
The Barzani, the readiness of the region “to start a serious dialogue to resolve the remaining problems,” noting “the need for the participation of friendly countries in this area.”
According to the statement, the guest delegation during a meeting on his satisfaction with “a visit to the Kurdistan region, and Park for Najarvan Barzani, his candidacy for the post of president of the Kurdistan region.”
The Turkish delegation expressed the hope that “the formation of the new cab of the Kurdistan Regional Government at the earliest time,” pointing out that “the historical friendship between the Kurdistan region and Turkey.”
He expressed his country’s readiness to “strengthen relations in all fields, especially in the economic and trade fields.”
The statement said that “the meeting discussed the political situation in the region in general, and other issues related to the bilateral relations between the two sides.”

BAGHDAD (Reuters) – Iraq has cut its average crude exports to 3.5 million barrels per day (bpd) under a deal to cut output, Oil Minister Thamer Ghadhban said on Thursday.
“The OPEC meeting in Vienna in April will consider the extent to which member countries are committed to agreed production cuts and whether the year-end reductions should be extended,” Ghadhban told reporters.

Iraq exported about 3.6 million barrels per day on average in January and February, and 3.7 million in December.
Ghadban added that Iraq is committed to the agreement and works to stabilize the markets, and that it produces slightly more than 4.5 million barrels per day, which is less than the full capacity of about five million.
“We do not want sharp price fluctuations because this affects producers and consumers,” he said.

(Baghdad: Al-Furat News) The House of Representatives in its fourth session of the second semester of the first legislative year in the fourth parliamentary session, chaired by Mohamed Halboussi, the Speaker of the House of Representatives on Thursday, read two laws.
At the beginning of the meeting, President Halabousi called on the parliamentary blocs to speed up the resolution of the file of presidencies of parliamentary committees to ensure that the work is not confused, indicating that a book will be directed by the Council to the government for the purpose of limiting the numbers of elements of the security services renewed their contracts and find out the amount of funds to add to the last third of the budget of the fiscal year and the distinction between A person who fails to fulfill his national duty and who has been dissolved for other reasons.
The Council voted to postpone the first reading of the proposed law to abolish the offices of inspectors general and submitted by the committees of integrity and legal to be presented at the next meeting.
He stressed the support of the Council for a comprehensive reform in the state institutions, calling on the concerned committees to speed up the introduction of legislation related to the reform process.
The Presidency of the Council postponed the first reading of the proposal to amend the law of the Federal Court No. (30) for the year 2005 until Saturday until the response of the Supreme Judicial Council on the Council’s inquiry on the opinion of the Judicial Council and their ownership of any proposals on the proposed law.
The President of the Council hosted the head of the Ports Border and Director General of the General Authority of Customs at the next session.
The Presidency of the Council postponed the reading of the report and discussion of the draft law of the first amendment to the law of the Fund for the recovery of Iraqi funds No. (9) for 2012 and submitted by the committees of integrity and finance to the next session.
He called Hilbousi Committee of Regions to hold a meeting with the Legal Committee next week for the purpose of resolving the discussion of the draft law on provincial elections, urging the benefit of the law of the elections of the House of Representatives in force and the views and proposals of ladies and gentlemen MPs.
The Council concluded the reading of the report and discussion of the draft law amending the Companies Law No. 21 of 1997 and submitted by the Committee on Economy and Investment.
The MPs’ interventions focused on the importance of ensuring the likelihood of the Iraqi partner in the management of companies and not less than 51% and finding control over the decision to cancel companies and not requiring that the decision to liquidate companies on the basis of being lost companies.
In its response to the interventions, the concerned committee confirmed the consideration of the opinions and proposals of deputies for the purpose of the draft law.
Mr. Halabousi presented the final report of the Commission on the Truth in Ninewa Province at the next meeting for the purpose of discussion.
The House of Representatives completed the first reading of the proposed law on the allocation of land plots for Iraqi families, which comes in application of the provisions of the Iraqi Constitution and ensure the provision of adequate housing for the individual and Iraqi families and maintain their dignity and ties.
The Deputy Speaker of the House of Representatives Bashir Haddad, while presiding over part of the meeting, the Legal Committee approached the government for the purpose of view its opinion on the proposed law.
http://alforatnews.com/modules/news/article.php?storyid=191698