Najaf (Iraq) – A statement issued by the Supreme Shiite cleric in Iraq, Ayatollah Ali al-Sistani, on his demand to limit arms to the state, as the most important challenge facing the state, raised questions about its significance.

The statement quoted Sistani as saying that “the most important challenges facing Iraq at this stage is to combat corruption and improve public services and arms inventory by the state and its security services,” expressing his hope that the Iraqi government to make acceptable progress in these areas.

It is noteworthy that the armed militias classified internationally in terrorist groups have independent headquarters in Iraqi cities and still retain their weapons after the restoration of the city of Mosul from the organization of Dahesh, and received financial support and armament of the Iranian Revolutionary Guards.

These Iraqi militias owe allegiance to Iran’s supreme leader Ali Khamenei and under the supervision of Qusem Qulaimani, commander of the Qods Force.

Sistani welcomed “any step to strengthen Iraq’s relations with its neighbors according to the interests of both parties and on the basis of respect for the sovereignty of States and non-interference in their internal affairs.”

Iraqi political sources expressed their surprise that Sistani’s statement would be issued immediately after a spiritual meeting. He knew that the militia file was Sulaymani, not Rouhani, and that the Iraqi government itself was incapable of disarming the militias.

Sistani’s statement stressed that “regional and international policies in this sensitive region must be balanced and moderate in order to spare their peoples more tragedies and damage.”

An Iraqi political observer wondered if there was a link between the statement attributed to Sistani and his reception to the Iranian president, especially what is related to the talk about the sovereignty of states, which is not found in Iran’s relationship with Iraq, where Iran dominates the militias that owe their ideological allegiance to the Supreme Leader of Iran, Sulaimani.

The observer said in a statement to the “Arabs”, “The paragraph on the weapon appeared as if it had been included in the statement because it is not applicable for two reasons. First, it is the Iraqi government that funds the militias. The second reason is that these militias are directly protected by Iran. That paragraph may not be aimed at popular mobilization, but at what the popular crowd calls the illegal militias. The militias that have been dispensed with their services recently. “ 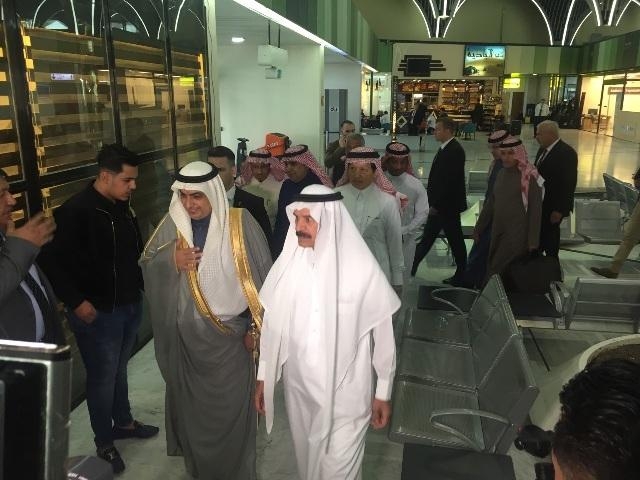 BAGHDAD – A
large economic delegation from Saudi Arabia arrived Wednesday at Baghdad International Airport, while Commerce Minister Mohammad Hashim al-Ani received him.
“A large economic delegation arrived at Baghdad International Airport,” the trade media said in a statement received by Mawazine News. “Trade Minister Mohammed Hashem al-Ani was received by the Saudi delegation.”
Al-Ani said that “the visit of the Saudi economic delegation to Baghdad is a confirmation of the government’s approach to openness to neighboring countries and the continuation of economic and trade partnerships.”
He added that “this visit will strengthen the continuation of meetings of the Iraqi-Saudi Coordination Council, which was founded two years ago.”
It is hoped that the Saudi delegation will meet Prime Minister Adel Abdul Mahdi.
On October 22, 2017, Iraq and Saudi Arabia signed the memorandum establishing the Coordinating Council between the two countries

The Austrian-Austrian Chamber of Commerce, in cooperation with the Austrian Embassy in Austria and the Austrian Association of Engineers, organized a forum of 70 experts, engineers, businessmen and government officials from Austria and Iraq, as well as a number of parliamentarians and experts from Europe and Canada and representatives of the United Nations (UNIDO) to discuss the most important engineering and economic aspects that help in the program of reconstruction of the city of Mosul and ways to ensure the active participation of the Austrian side in the reconstruction projects through the development of clear plans with the Iraqi side.
The Forum was opened by Dr. Richard Schintz, Chairman of the Austrian-Arab Chamber of Commerce and Vice-President of the Austrian Federal Chamber of Economy, welcomed the guests in which he recognized the importance of holding the roundtable meeting and the desired goals by taking advantage of the available expertise and capabilities.
The Secretary General of the Austrian-Arab Chamber of Commerce, Mudar Al-Khoja, said that the idea of ​​convening the round table for the reconstruction of the city of Mosul came after a series of international meetings, meetings and conferences on the Iraqi issue. The presence of a number of European Parliamentarians and representatives from public and private sectors from different continents reflects the international interest in The reconstruction of the Iraqi city of Mosul after the removal of the organization calling the terrorist.
For his part, the head of the reconstruction fund for the areas affected by terrorist operations in Iraq, Mustapha al-Hiti, praised the importance of the level of participation because it deals with aspects of life and infrastructure to reconstruct the Mosul, pointing out that the biggest challenges facing the city of Mosul related to demining, especially in the old area.

The correspondent of the agency {Euphrates News} that “Rouhani did not hold a press conference after the meeting, and went to the hotel and then meet with other religious references in Najaf.”

So far, Ruhani’s intention to hold a press conference at the end of his visit to the cleric has not been confirmed.

Rohani arrived this morning to Najaf and supervised the visit to the shrine of Imam Ali and met with Imam Sistani.