The leader of the Kurdistan Democratic Party, Massoud Barzani, discussed Tuesday with US Secretary of State Mike Pompeo the situation in Iraq.

In a statement published on the official website of the President of the Kurdistan Democratic Party Massoud Barzani, Van Pompeo contacted Barzani on Tuesday evening by telephone, and discussed the political situation in Iraq.

The two sides exchanged views on the latest developments and political situation in Iraq, the statement added.

(Baghdad: Al Furat News) The Cabinet held its regular session on Tuesday, chaired by Prime Minister Adel Abdul Mahdi.
“The Council of Ministers voted to grant the Ministry of Transport exemptions and powers to sign contracts on the infrastructure project of the port of Faw,” a statement from the office of Abdul Mahdi said.
The session witnessed the vote on the draft rules of procedure of the Council of Ministers. The Council also voted on the memorandum of understanding for the processing of crude oil between the Government of the Republic of Iraq and the Government of the Hashemite Kingdom of Jordan.
The Cabinet discussed “the reality of Iraqi women, their participation and support, and hosted the Chairman of the Standing Committee for the Advancement of Women and listened to the observations and suggestions.”
The Council of Ministers approved the minutes of the meeting of the transfer of ownership of the Canadian aircraft {CRJ}, as well as the adoption of the recommendations of the Council of Ministers of Energy in its tenth session, and agree to rent the French embassy building.
The Board voted on external borrowing, grants and mechanisms.
The Cabinet discussed ways of regulating the relationship between the legislative and executive branches through a code that serves the two authorities and strengthens their supervisory and executive role.
http://alforatnews.com/modules/news/article.php?storyid=190691

(Reuters) – Prime Minister Adel Abdul-Mahdi said on Tuesday he would visit “important” figures in Iraq in the coming days.

“The government is committed to considering the demands of all legitimate segments of society,” he said.

“The government has made plans to continue pursuing and eradicating it,” he said.

The president @ BarhamSalih confirmed Iraq’s determination to strengthen bilateral bilateral ties with the United States and expand the horizons of cooperation to serve the common interests of the two friendly countries.

President of the Republic @ BarhamSalih stresses the need to reverse the image of Iraq bright in the countries of the world through the work of embassies and diplomatic missions of Iraq. This came during a meeting with him on Tuesday at the Peace Palace in Baghdad, a number of new ambassadors.

President of the Republic @ BarhamSalih praises US support for Iraq in various fields , especially in the war on terrorism and to help the displaced, refugees and displaced persons and facilitate their return to their areas and the reconstruction of the damaged ones. 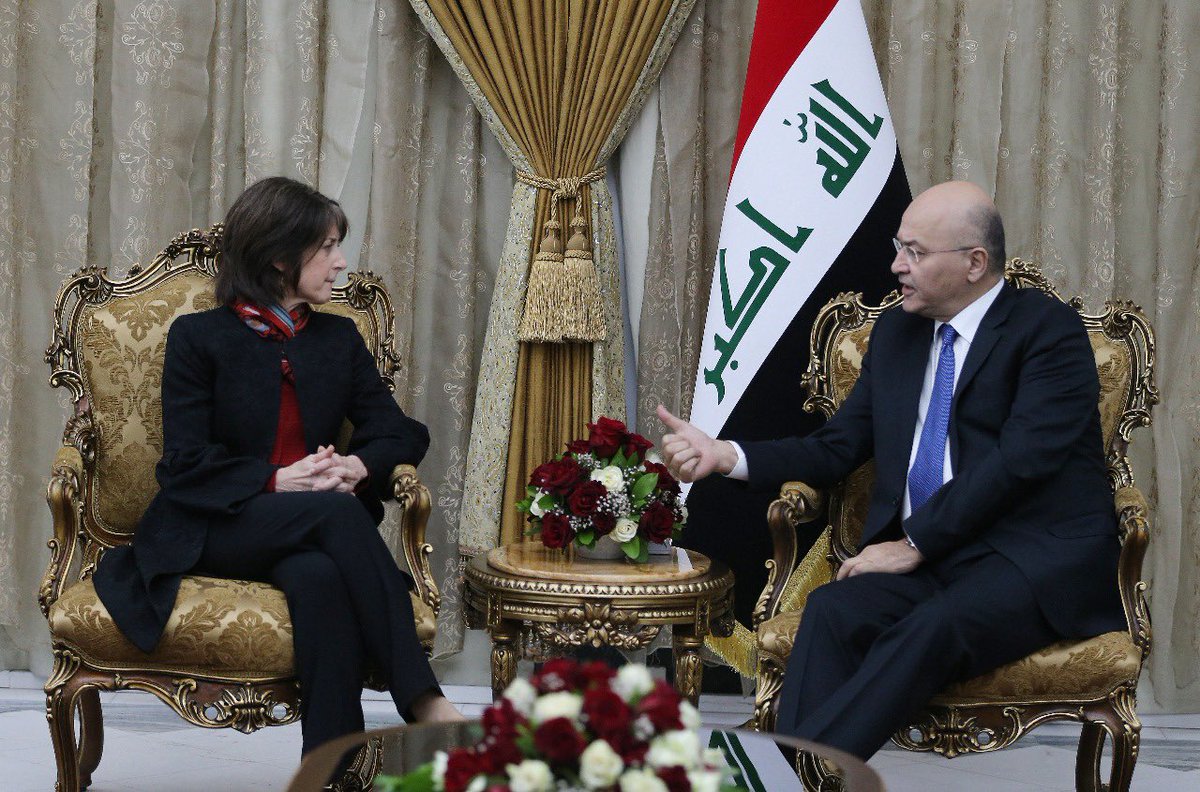 Iraqi President Barham Saleh said on Monday that coalition forces against the US-led Da’ash “came at the invitation of the Iraqi government.”

He pointed out that the presence of troops is “to train Iraqi forces in its war against terrorism,” according to the presidency.

Saleh said in an interview with local media that “there is a national consensus that there is no foreign combat bases or forces,” but said “national consensus exists, but in the end depends on the Iraqi vision of security, and the position of the Iraqi government and the Commander-in-Chief of our continued need for these advisers and trainers So that this is the basis for the decision is nothing else. “

The Iraqi president stressed the role of coalition forces “important” in supporting Iraqi forces “in the fight against terrorism and victory.”

The House Committee on Security and Defense said last month that a bill aimed at removing foreign troops from the country on the agenda of parliament in the new legislative term, which is expected to hold its first meeting on Saturday

(Baghdad: Al-Furat News) The House of Representatives begins its second legislative term at the invitation to discuss the unification of efforts of the authorities to fight corruption in the presence of the President of the Republic and the ministers next Saturday.
A statement to the Presidency of the House of Representatives, received the agency {Euphrates News} a copy of it, “The agenda of the session next Saturday includes a speech to President Barham Saleh.”
” The table also includes a general call to discuss the unification of the authorities ‘efforts to combat financial and administrative corruption in the presence of : –
1. Prime Minister.
2. Chairman of the Supreme Judicial Council.
3. President of the Supreme Audit / agency.
4. Rees board integrity / agency.
He noted That “the meeting will be held at noon on Saturday.”
http://alforatnews.com/modules/news/article.php?storyid=190660