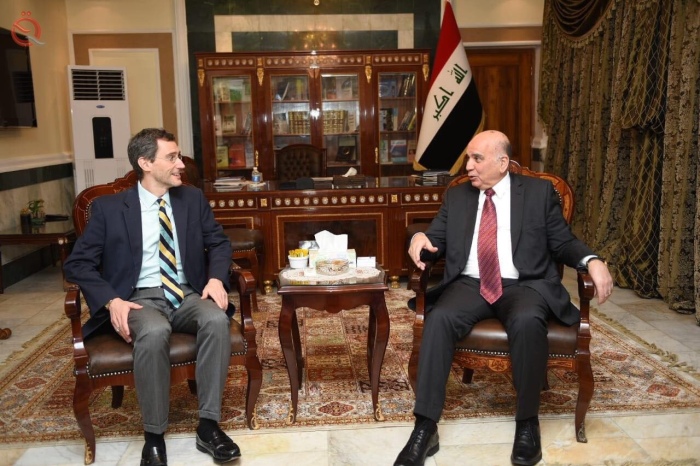 The Deputy Prime Minister for Economic Affairs and Finance Minister Fuad Hussein, on Thursday, with Joy Hood, charge d’affaires of the US Embassy in Iraq, to provide a safe and attractive environment for investment in Iraq, while Hussein said that the Iraqi government is continuing to prepare plans to implement the government program as well as start planning and preparing a law Budget for 2020 .

“The Deputy Prime Minister for Economic Affairs and the Minister of Finance received the charge d’affaires of the US Embassy in Baghdad, Joe Hood and the accompanying delegation,” said the press office of the Prime Minister in Baytan received, the Economist News, a copy of it, noting that “the two sides discussed during the meeting bilateral relations between Iraq and the states And the plans of the Deputy Prime Minister to head the Iraqi delegation to the meetings of the World Bank and the International Monetary Fund, which will be held next April in Washington, DC.

“During that visit, the Deputy Prime Minister will meet senior officials from the United States, the international community, World Bank and IMF officials and hold meetings with US trade representatives on the resumption of bilateral trade and investment talks,” the office said.

“The two sides discussed providing a safe and attractive investment environment to encourage investors to work in Iraq, create job opportunities, eliminate unemployment, improve the level of services and construction throughout Iraq by activating the strategic framework agreement in the field of trade and investment, Companies and capital to work in Iraq and participate in reconstruction campaigns and services. ”

“The Iraqi government is continuing to prepare plans to implement the government program as well as start planning and preparing the budget law for 2020 to ensure early coordination with all parties, institutions and governorates for the purpose of identifying the actual needs and building a balanced budget and economy and ambitious services benefiting the Iraqi people.”