Twilight News / announced the French president, Emmanuel shifty, on Monday, he will visit Iraq before the end of the year, “to offer his country’s support for reconstruction” after the defeat of the militants.

Shifty he confirmed that he will visit Iraq “within a few months” at the invitation of his counterpart, Barham Salih, who was a guest at the Elysee Palace for lunch.

He said that Iraq is shifty, a year after his victory over Daesh, which controlled a large part of its territory, “will play a key role in the region, a pivotal role.”

For his part, Saleh welcomed by the “model partnership” of Iraq, with France and the European Union “out of a very difficult period,” he directed his words to shifty: “We hope to welcome you in Baghdad soon.”

Saleh was on Monday morning visited UNESCO headquarters to discuss the reconstruction of the city of Mosul, the project, the former stronghold of militants in Iraq, which have been largely destroyed.

{International: Al Furat News} A senior US envoy, one of the founders of the Taliban, met for the first time in a bid to broker peace in Afghanistan as the latest round of talks began in Qatar.
US special envoy Zalmay Khalilzad said he had lunch with Mullah Abdul Ghani Pradar before “talks start”.
Pakistan recently released Mullah Barader from his prison.
His presence in Qatar is believed to increase the chance of agreement.
The United States says talks between Washington and the Taliban in Qatar have made progress in ending a 17-year conflict in Afghanistan.
Khalilzad said the January talks were “more positive than previous talks,” but added that some issues were still pending.
He said an “initial framework” for a peace agreement had been agreed, based on the United States commitment to withdraw international troops from Afghanistan and the Taliban’s commitment not to allow armed groups not to be active in its territory.
The Taliban also said the talks had progressed, but a spokesman added talks on “outstanding issues” would continue.
The Taliban have so far refused to hold direct talks with Afghan officials, whom the Taliban call “puppets”. The Taliban have said they will not start talks with the government until a firm date has been set for a US troop withdrawal.
Mullah Pradar, a deputy to Taliban leader Mullah Hibatollah Akhunzadeh, took over the Taliban’s political office in Qatar in January but has so far remained in Pakistan and has not appeared at any meeting or public meeting.
Mullah Pradar held a number of key positions in the Taliban until he was held by the Pakistani authorities in 2010.
The Taliban’s strength and influence have grown since the departure of foreign combat troops in Afghanistan in 2014.
Last month, Afghan President Ashraf Ghani said that more than 4,500 security forces The country has been killed since taking office in 2014.
The number of residents in Taliban-controlled areas or areas with clear military representation and regular attacks is estimated at 15 million, half the population of Afghanistan.
On Sunday, UN data showed that more civilians died in Afghanistan last year than in any other year.
In December, reports indicated that the United States planned to withdraw troops of 7,000 troops, accounting for half of the US forces in Afghanistan.
http://alforatnews.com/modules/news/article.php?storytopic=43&storyid=189757

“The development of the agricultural sector is a priority in our vision to achieve prosperity and stability and provide employment opportunities, which is the basis on which it is built in many solutions, including the rights of agricultural engineers,” Prime Minister Adel Abdul Mahdi said.
A statement of his office received the agency {Euphrates News} a copy of it that Abdul Mahdi, “received the delegation of the Engineers Syndicate in the presence of Agriculture Minister Saleh al-Hassani and Deputy Chairman of Agricultural Engineers Sadeq Jafar al-Mahmoudawi.”
The Prime Minister added that “we are keen to provide the necessary funds and allocations for the agricultural plan and the benefits of farmers without delay. We appreciate the great role of the union and other unions and organizations in demanding the legitimate rights of its members.
He also reviewed the agricultural engineers’ demands paper and promised to meet all possible and quick response, and to consider the amendment of the laws in favor of the agricultural sector, and thus the agricultural engineers, in addition to the provision of agricultural and residential land and the release of loans and their stabilization. On its implementation “

French President Emmanuel Macaron said Monday he was happy to keep US troops in Syria, while stressing the need to protect the Iraqi state.

“We are happy with the decision to keep US troops in Syria,” McCron said at a news conference with Iraqi President Barham Salih. “We have to protect the Iraqi state now.”

For his part, Saleh said that “our victory over the need to devote to increasing the security and economic momentum,” adding that “we need to work with our partners to dry the resources of terrorism.”

He added that “we must proceed to security in the region and this can only be achieved by the return of Iraq,” stressing that “Iraq will not know stability at least four decades, but we are determined to return.”

Editorial date: 2019/2/25 19:58
{Baghdad: Al Furat News} The Central Bank of Iraq, the health of the media and social networking news of the entry of the US dollar from Libya.
A statement by the bank received the agency {Euphrates News} a copy of it, “the procedures for verification of the absence of this currency has been the exchange of information with the relevant agencies in Iraq and abroad.”
The bank warned of “fraud and fraud may be practiced by some in this area and confirms its continuation to take control and audit procedures in the circulation of foreign currency in accordance with the instructions in force to ensure the safety of foreign currency circulation.”
He also called on “all media to be careful in dealing with the news of the inaccurate news of the negative effects on the stability of the financial system and banking in Iraq.”

Acting today received the US embassy in # Iraq , Mr. Joey Hood. We talked in the bilateral relations and political developments and the development of the working environment and investment to support and diversify the Iraqi economy. @ USEmbBaghdad @ IraqiGovt 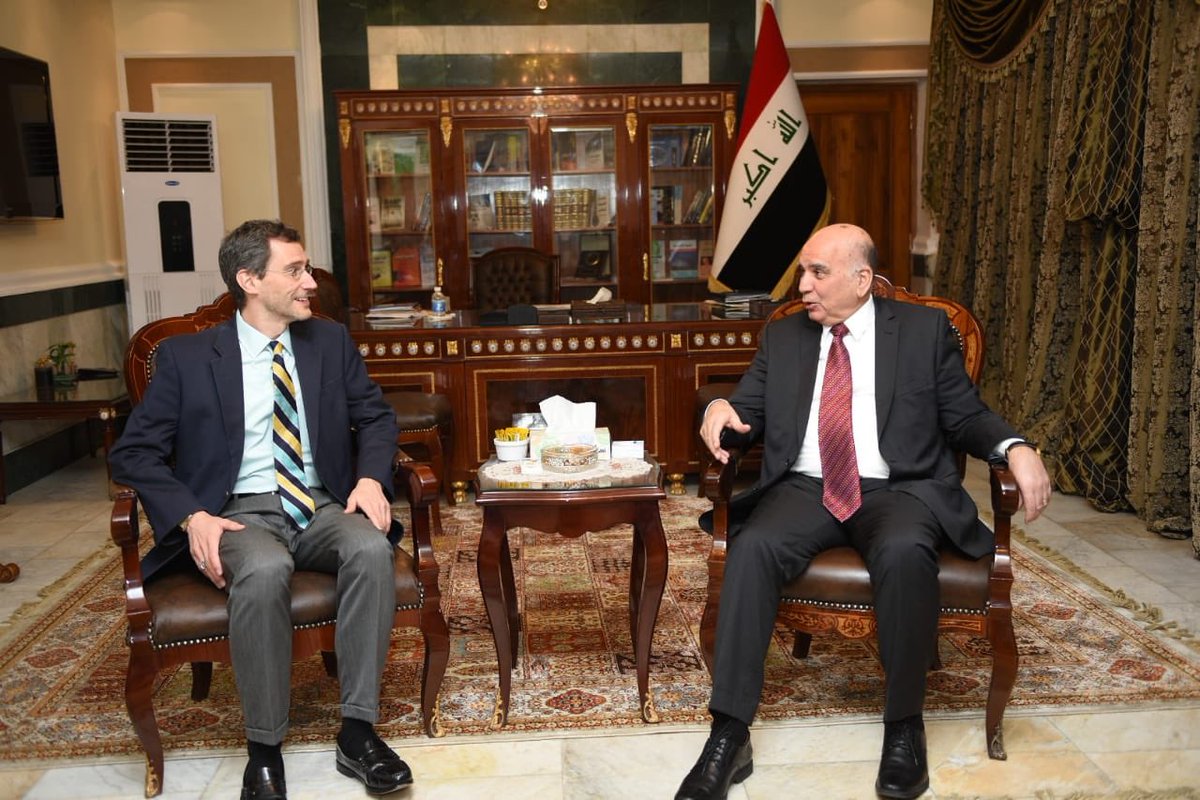 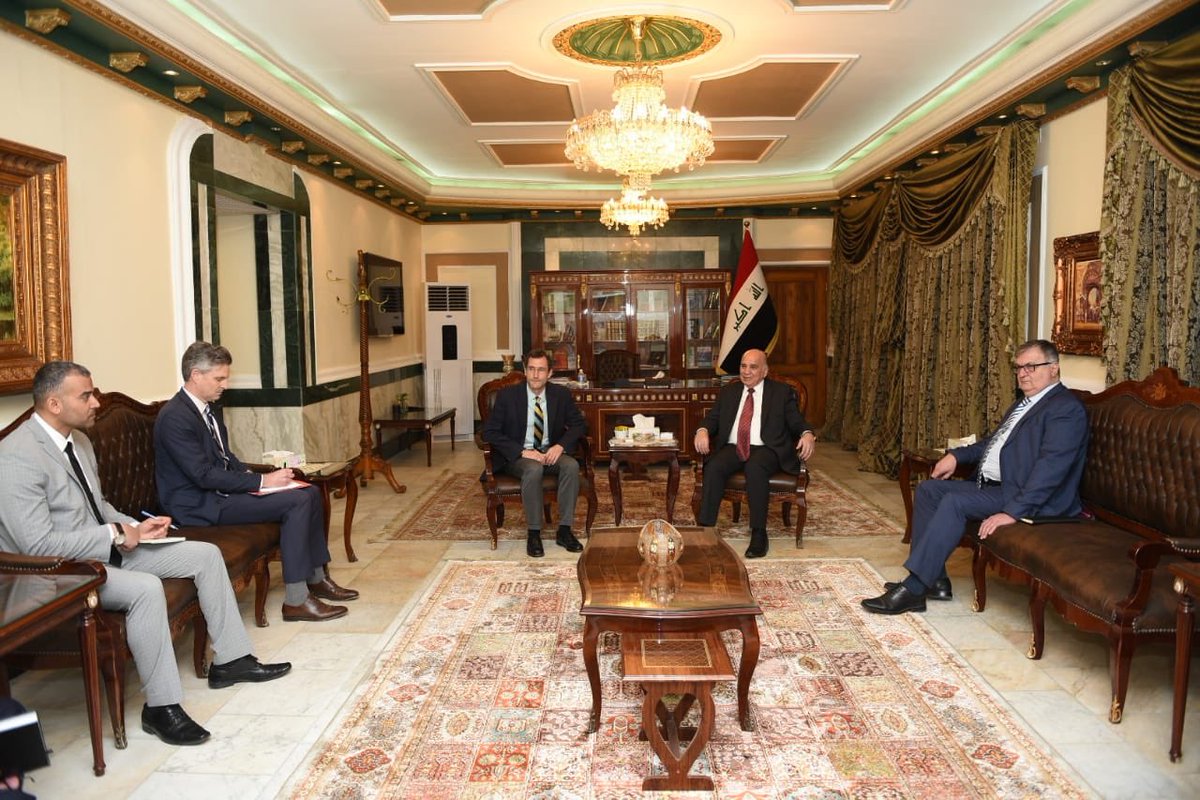 The astronomical calculations predict that the month of Ramadan next month to a number of countries in the region, including Iraq after 69 days from now.
According to those accounts published today, the month of Rajab will occur on Friday, the eighth of March next, noting that the first day of Ramadan coincides with Monday, the sixth of May next.

French President Emmanuel Makron received on Monday afternoon at the Elysee Palace his Iraqi counterpart Barham Salih, who arrived in France on Sunday for his first working visit, which is expected to last until Tuesday.

The visit comes four months after Barham Saleh was elected President of Iraq, replacing the supposed French President Emmanuel Macaron to Baghdad on February 27-28, but postponed because of his busy schedule.

French diplomatic sources believe that Paris will rely more on the Iraqi paper as the only one in the current situation that can guarantee stability and reconstruction and thus achieve permanent victory over the terrorists.

“There is a real return to Iraq and Paris hopes to regain its regional status,” French Foreign Minister Jean-Yves Laudrian said during a visit to Iraq about a month ago.

Observers saw that the journey of Ludrian from Baghdad to Erbil and Najaf over two days, reflect the importance attached by Paris to its relations with Iraq and the stability of this country.

On the other hand, officials in Baghdad see great importance for the role of mediation that France can play in the Middle East because of its good relations with the majority of the regional countries neighboring Iraq, such as Iran, Saudi Arabia and Qatar, not to mention its good relations with the Kurds of Iraq. “The French presence in Iraq is important to calm the game of external actors who want to make Iraq the closed field to settle their accounts,” the French daily Le Figaro quoted an Iraqi diplomat as saying in Baghdad.

But the latter considered that, moreover, Baghdad wants Paris to “adopt an Iraqi policy from the central state.” She (France), according to him, talking a lot about Kurds and Yezidis and Christians, and focused too much on minorities and not on Iraq as a state. “The French should not have ulterior motives, such as using Iraq to get something in Syria or anywhere else,” he warned.

The French president and his Iraqi counterpart will also discuss the issue of cooperation against the jihadis of the state, whose ideology has not disappeared and is still in control of some pockets throughout Iraq despite the great setback it has suffered. Paris has deployed more than 1,000 French troops near Baghdad to train the Iraqi army and the north as well.

In addition, the French diplomatic sources confirmed that the fate of the French jihadists detained in Iraq and Syria will be at the center of McCron and Saleh’s talks. Iraq could be a “closed room” for some of the French jihadists detained by the Kurds in the north of Syria in particular, before their possible return to France Following the US withdrawal from Syria. A point observers expect Iraq to use as a bargaining chip in negotiations with the French government.

The issue of reviving trade exchanges will also be a topic of discussion between the two leaders. Iraqi diplomats considered their country’s relations with Paris to be good, but they need concrete moves from the French side. In this context, a French civil aviation team is expected to visit Baghdad soon as part of the reopening of the Paris-Baghdad line, which has been closed since 2010. Baghdad also wants a French bank to set up an office in Iraq to facilitate exchanges.

The Iraqi diplomatic source said that a strategic agreement between the French and Iraqi governments is almost complete and is expected to be signed at the end of March or April. He also pointed out that France has made cultural cooperation with Iraq one of its priorities, but there is still much work to be done. There are only 13 Iraqi students in France, for more than 5,000 in Russia.

French companies appear to be very reluctant to invest in Iraq, given the insecurity and lack of good governance undermined by corruption in the oil-rich country.