{Baghdad: Al-Furat News} urged Rafidain Bank, citizens to move their inactive accounts that have been more than seven years in the branches in Baghdad and the provinces.

The bank’s information office said in a statement received by the agency {Euphrates News} a copy of it, that the instructions and banking laws in force require the freezing of accounts suspended and inactive in savings and current for seven years and transferred to the Central Bank of Iraq.

He urged the bank “citizens to avoid the idle of their assets and keep away from the negative tenacity by maintaining cash in private places instead of banks.”

BAGHDAD – “About 50 MPs in the Iraqi parliament submitted a written request to the Speaker of the House of Representatives Mohammed Al Halbusi to include on the agenda of the first session of the second legislative term an item concerning the review of the strategic cooperation agreement between Iraq and the United States signed in 2011” .

This comes at a time when Shiite cleric Moqtada al-Sadr requires a bill demanding the simultaneous withdrawal of Iranian, Turkish and American forces from Iraq, and not just the withdrawal of Americans, while Iran’s allies failed to assemble a majority in support of their efforts to push out US forces.

The signatories, who belong to the Fath Alliance and the State of Law Coalition close to Iran, want to restrict this freedom, in preparation for legislation that would require the government to remove all foreign troops from Iraq.

According to the sources of the “Arabs”, the leadership of the Fatah Alliance, discussed the legislation on the departure of foreign troops from Iraq, with representatives of the current led by Moqtada al-Sadr. The sources said that Sadr “stipulated to support this legislation to explicitly provide for the removal of any Iranian troops from Iraq, along with US forces, Turkish and Italian.”

While Fatah leaders tried to frame the bill with a comprehensive text that included reference to Turkish and Italian forces, to avoid being charged with targeting US forces, Sadr wants to include a clear clause on Iran’s military influence in Iraq.

The sources point out that disagreements over the item on Iranian military influence are hampering the Sadr bloc’s bloc joining efforts to support legislation that would force foreign troops to leave the country.

“We will absolutely not allow any ground presence or US air bases in Iraq,” the leader of the Fatah alliance Hadi al-Amiri said in response to US President Donald Trump’s remarks on Tuesday, stressing that the Iraqi parliament would pass a law on the matter.

The coalition of state law, led by Nuri al-Maliki, claims that the United States “is exerting pressure on Iraqi deputies, to change their position in support of legislation to remove foreign forces from Iraq.”

The leader of the State of Law Saad al-Muttalibi said Washington “is pressing some MPs from different political blocs to change their positions (of the US military presence in Iraq).”

The lobbyist is based on these “pressures” in interpreting “some MPs’ backtracking” on the efforts of this legislation, signaling the difficulties Iran’s allies have in mobilizing a majority capable of passing such a law.

MP Hassan Salim, the movement of Asaib Ahl al-Haq, loyal to Iran, that “demanding the survival of US occupation forces traitors of the homeland and slaves of the dollar,” calling on the parliament to “be a veritable and genuine pause through legislation to remove the foreign forces from Iraq.”

During his visit to Iraq on April 12, Acting US Defense Secretary Patrick Chanahan commented on parliamentary mobility to legislate a law aimed at foreign military presence in Iraq. “There is activity in their legislature,” he said. “The debate over whether to limit the number of US troops In Iraq, and I wanted to clarify to Prime Minister Adel Abdul-Mahdi, we know our role and we know that we are here at the invitation of the Iraqi government. “

It took only five days for the US secretary to visit, until the United States sent a senior military official to Baghdad to meet with Iraqi officials and assure them of his country’s commitment to support the Iraqi military establishment.

On Sunday, General Joseph Fotill, commander of Central Central Command, arrived in Baghdad to meet with Adel Abdul Mahdi, Parliament Speaker Mohamed Halabousi and Army Chief of Staff Lieutenant General Osman Al-Ghanmi, where the three officials expressed their desire for continued US support for their country. US forces in Iraq.

“The war against the Da’ash terrorist gang and the training, the positive developments in Iraq and the government’s intentions to enhance security and stability and the reconstruction of liberated and damaged cities, as well as the efforts to eliminate the remnants of pro-Syrian in Syria.”

The Iraqi Prime Minister’s Office did not give further details about the meeting, which was attended by US Ambassador to Iraq Joy Hood and General Paul La Camra, commander of the International Coalition Forces in Iraq and Syria.

During his meeting with Halabousi, Bouteflika reiterated his country’s commitment to support Iraqi security forces in the security field to eradicate terrorism once and for all.

Halabousi called for the need to support the Iraqi security forces in the field of arming and training and develop their capabilities to eliminate terrorism and achieve stability.

“The cooperation and coordination between Iraq and the international coalition, led by the United States in the military field.”

“The partnership with the United States continues and continues to support combat operations to eliminate the remaining remnants of the terrorist, as well as to support and develop the capabilities of Iraqi forces in training, equipping and border control,” said al-Ghanmi, a senior general in the Iraqi military establishment.

“The level of cooperation and coordination between Iraq and the United States is at its highest level and we are committed and continue to provide all logistical support and assistance to develop the capabilities of the Iraqi army in all its forms,” ​​he said.

The Italian ambassador to Iraq, Bruno Pasqueno, has prepared his country for an expanded investment conference in the Italian capital of Rome, in coordination with the Iraqi Embassy, ​​the National Investment Commission and the joint government relations committee.
During his meeting with the governor of Dhi Qar Yahya al-Nasseri in the governorate office Monday, Pasquino said that the Italian embassy invited the administration of Dhi Qar province to participate in this conference by presenting investment opportunities to encourage Italian companies to enter the local market, pointing out that this conference will be a step First to develop common relations between the two countries.
For his part, the governor of Dhi Qar there are many investment opportunities in the province in various areas; including the oil industry, services, infrastructure and other sectors, noting that the province hopes that the Italian conference to encourage companies wishing to work in the province of Dhi Qar in the coming period .
http://alforatnews.com/modules/news/article.php?storytopic=37&storyid=188965

“The parliament of the Kurdistan region Vla Fred from the Democratic Party was elected as its president.”
Farid received 62 votes out of 111 members in a session that was boycotted by the National Union because of its requirement to address issues of power and position sharing in the region and the federal government, Kirkuk province, and the appointment of a new governor, as a package before the signing of the draft bilateral agreement with the Democratic Party, which was developed by a joint committee of the leadership of the two parties, on the fifth of this month
For the first time a woman was elected to the Kurdistan Region Parliament during its previous sessions, In 1992 , In an “extraordinary” move, and
competed with Valla Farid, the candidate of the new generation block, Siban Salem, who obtained 8 votes, while the process produced three white votes.
The head of the Democratic bloc in the Parliament of Kurdistan, Horman Hawrami, during the session that the mass submitted temporarily candidate Fala Farid for the post, and in the case of agreement with the Union to the agreement will be withdrawn candidate, and the election of a candidate for the Union, which according to agreement the position of his share.
The Democratic announced the submission of Hainam Hawrami for the post of deputy speaker of parliament, while the Turkmen blocs submitted Mona Kahwaji for the second deputy.
And dissolved the Democratic Party in the first place in the provincial parliament elections, which took place on the thirtieth of September last, achieving 45 seats out of the seats of the House of Representatives, which is 111, what he authorized to maintain the posts of the President of the Territory and the Prime Minister, to be assigned to the National Union, which dissolved Second with 21 seats, the post of speaker of the Parliament of the Territory. 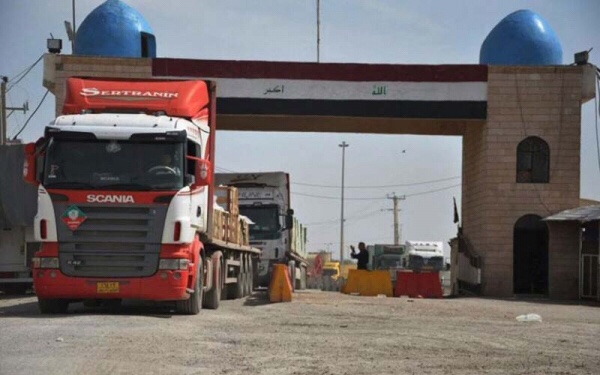 According to a document obtained by the agency {Euphrates News} a copy of it, “the Customs Authority announced the prevention of entry or exit of human medicines.”

He added, “The entry and exit of a number of materials, including fireworks, military clothes, tools, and currency of all kinds and all types of imaging equipment.”

Oil prices on Monday hit its highest level since November last year, supported by OPEC-led supply cuts, US sanctions on Iran and Venezuela, and hopes of resolving the US-China trade dispute.

Prices have received support from tight supplies in the market, given OPEC production cuts and other producers such as Russia. The group agreed late last year to cut output to about 1.2 million bpd to prevent a supply oversupply.

US sanctions on Iran and Venezuela have also supported OPEC members’ crude prices.

Traders said financial markets, including crude futures, have received further support from hopes that the United States and China could resolve their trade dispute soon, which is pressing global economic growth.