The financial, moral and logistical support of the Central Bank of Iraq and the Association of Iraqi Private Banks and the outstanding participation of private banks in the Baghdad International Book Fair, which will be opened on February 7 under the slogan “One book more than life”
on the ground of Baghdad International Fair and under the patronage of the Prime Minister and the presence of government figures Representatives of the private sector, foreign and Arab publishing and distribution companies, and cultural, economic and banking personalities. This confirms the spirit of promoting the hope of the Iraqi people for reform and change to a promising future, especially the economic and cultural elite. For opportunities. The number of participants will be more than twenty-four countries and 700 publishing houses will be local, Arab and foreign. The Association of Banks and the Federation of Publishers will be organized
A number of workshops and seminars on cultural, economic, legal, banking and literary innovations of young people and success stories achieved in all areas and contributions of the Central Bank and the Association of banks in the implementation of the strategy of financial inclusion and community development and the role of academic coordination with universities in support of culture and education and the care of young intellectuals run by the Governor of the Central Bank and the Ministry of Finance and the judiciary The ambassadors of friendly and sister countries and the President of the Association of Banks and its professors universities and specialists in the strategy of financial inclusion and stability in the financial system and monetary system and the challenges of the banking sector and strategy And the contributions of banks in community initiatives and project Baghdad project and the station and the empowerment of young people and empowerment of women through the program and the empowerment of small and medium-sized projects will be hosted by foreign and Arab intellectuals and Iraqi expatriates and Iraqi elites will be on the sidelines of the exhibition and the establishment of a new signing ceremony for researchers and professors and specialists. The closing ceremony of the exhibition will honor a number of national symbols in the fields of cultural, economic, banking and social creativity. I invite the Ministry of Culture, cultural institutions and universities to support the exhibition, visit it and contribute to its activities. It is a cultural and economic demonstration organized by the private sector. It called on all banks to participate in the activities of the fair, to hold cultural and economic events, to participate actively in banking awareness, to promote the project of settling salaries and to deliver their banking products and modern technical services to the public directly and using modern awareness and educational methods. And will be monitored by the Central Bank because it will inevitably contribute to the achievement of financial coverage and the access of banking services to a large segment of citizens in line to support the profitability of banks. 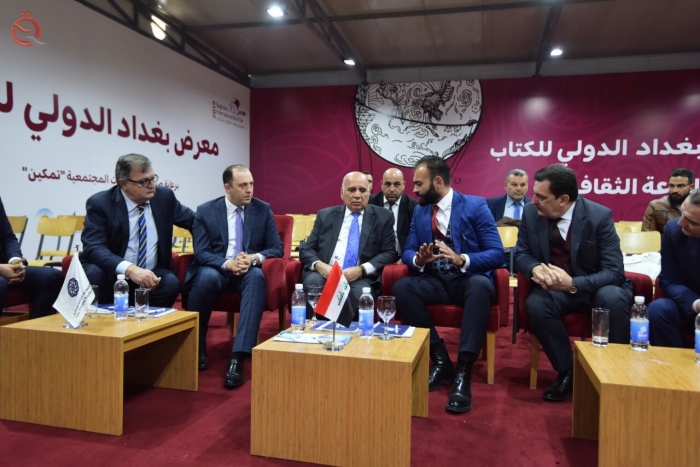 A meeting between Finance Minister Fuad Hussein, the Association of Iraqi Private Banks, a number of private banks and a number of project representatives supported by the Tamkeen Community Initiatives Fund was held at the seminar hall of Baghdad International Book Fair.
The Executive Director of the Association of Iraqi Private Banks Ali Tariq to the great role played by the Central Bank of Iraq in support of community initiatives and sponsorship of the past and current sessions of the Baghdad International Book Fair and in cooperation with the Association of Iraqi private banks.
He added that the Association of Banks is working hard with the Central Bank to develop the banking sector.
On the other hand, the representative of the Bank of Baghdad at the meeting, on double taxation and the great damage done to the banking sector and the need to find an urgent solution to this problem.
Meanwhile, the director of the Board of Directors of the National Bank of Iraq, Ayman Abu Dheim, “Some government agencies refuse to recognize the instruments issued by Iraqi private banks, despite the existence of a partnership between the public and private sectors
He added that these measures reflected negatively on the private banking sector and communicate with ”
In the meantime, the Chairman of the Board of Directors of Ashur Bank, Noor Al-Hanalal, on the great support provided by the Central Bank of Iraq for the care of cancer patients through the establishment of the Academy of Cancer fighters and
called the child fighting Tabarak to set up a special hospital for cancer
, Said that it was necessary to support the children and provide them with urgent treatment because the lack of treatment resulted in the death of many children
Nour’s Executive Director Noor Ayman Salman called on the Minister of Finance to allocate land for the construction of a cancer hospital in Baghdad.
In conclusion, Minister of Finance Fouad Hussein praised the efforts of the Central Bank and the Association of Private Banks in supporting the community through the cultural and humanitarian projects that they have supported in the past two years.