President of the Republic @ BarhamSalih stresses the need to end the crises suffered by Iraq over the decades through the rebuilding of the current political system and reform and to restore citizens ‘ confidence in the government. This came during his speech at the events of the Rafidain International Forum on Monday, 4-2-2019. 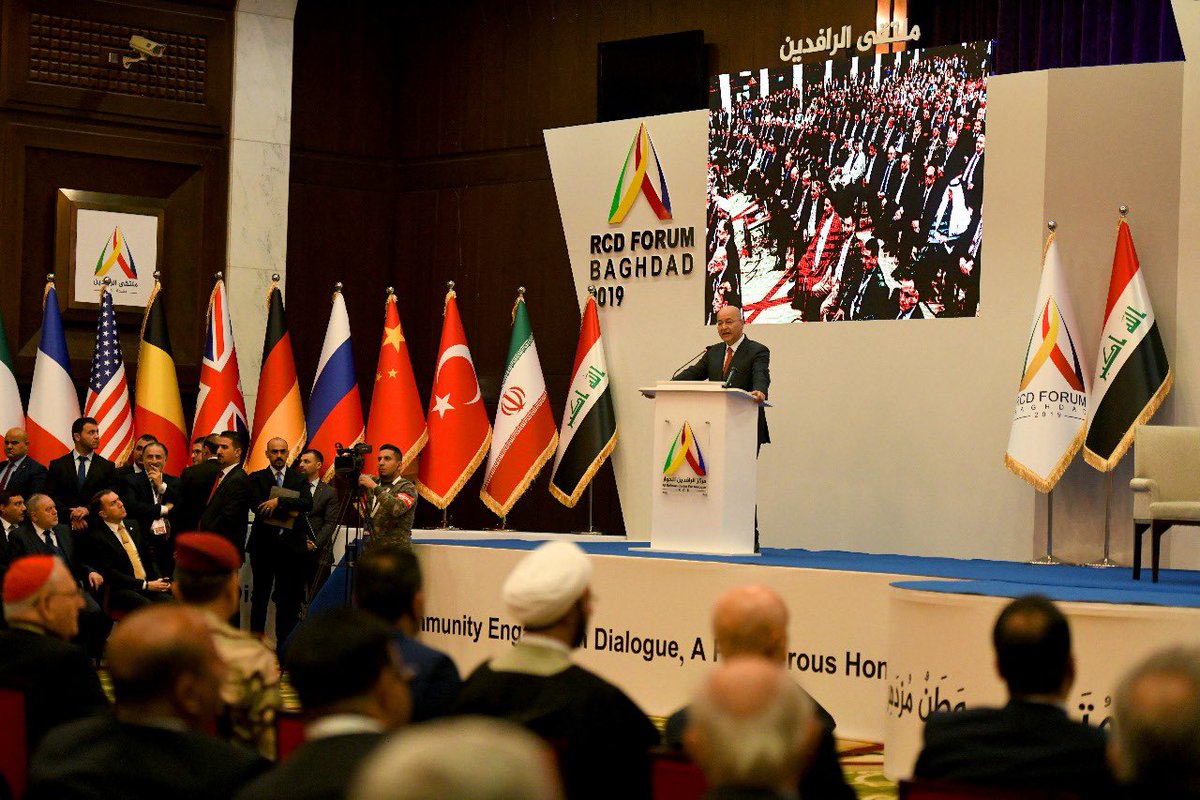 President of the Republic @ BarhamSalih approves the Federal Budget Law for the current year. He stressed the need to provide basic services to citizens, and start the stage of construction and reconstruction, valuing the efforts that contributed to the preparation of the draft budget and study and legislation, whether in the government or the House of Representatives. 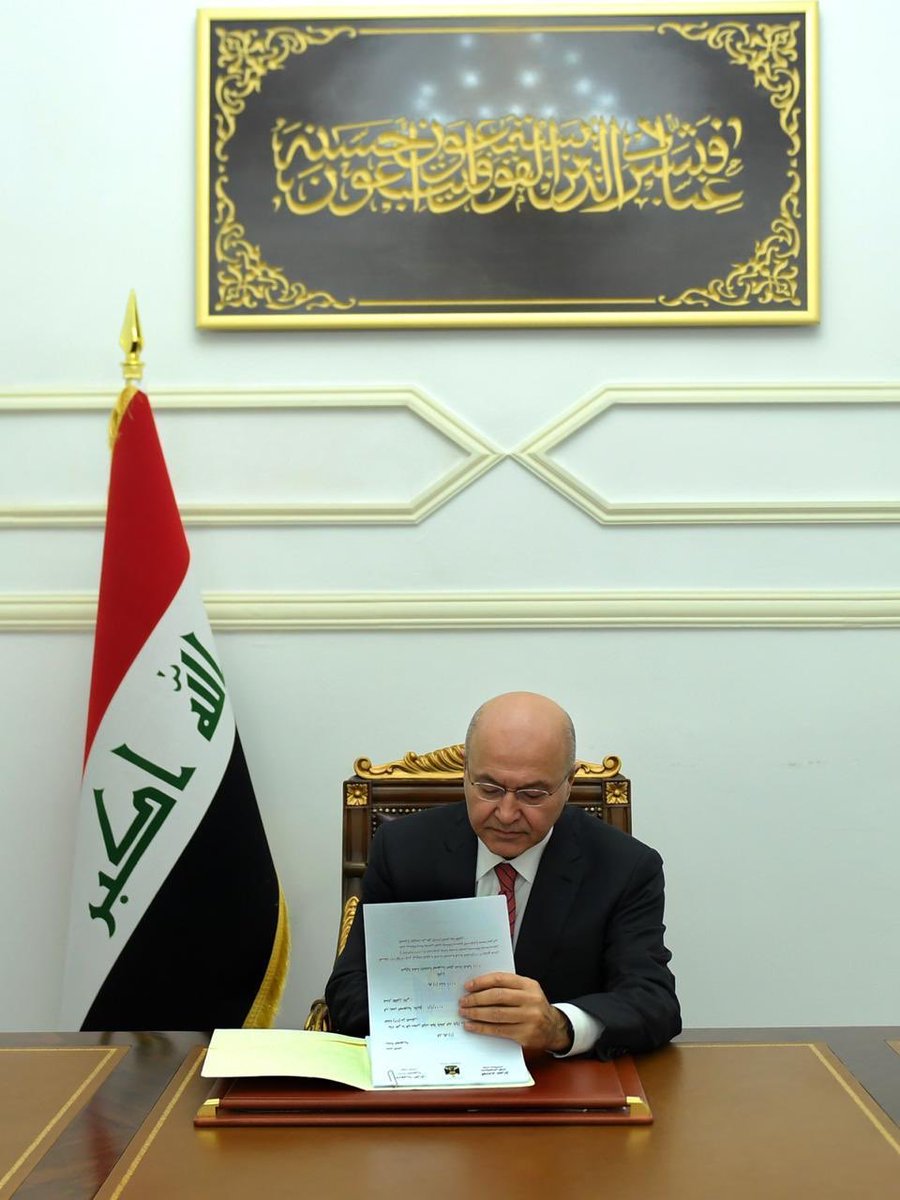 KRG PM Nechirvan Barzani welcomes Marshall Billingslea, the US Assistant Secretary for Terrorist Financing, to Erbil on February 4, 2019. Photo: KRG
ERBIL, Kurdistan Region — The head of the Kurdistan Regional Government (KRG) explained how critical Erbil can be in the fight against extremism in the financial sector in a meeting with a top US Department of Treasury official.

“They discussed regional situations, attempts to have coordination between the KRG, Iraqi government and coalition countries especially the US in order to eradicate violence and eliminate financial resources of extremist groups,” read a statement from Barzani’s office.

US trade delegations make regular trips to the Kurdistan Region.

“[Barzani] also said that it is KRG’s policy to support the private sector and draw foreign investors and they need the help of their friends in this regard,” the statement added.

Reducing corruption and barriers to entry for American companies has been a goal of Washington.

Billingslea “expressed his country’s readiness to assist Iraq and the Kurdistan Region in the area of strengthening their economic infrastructure and reforming governmental institutions,” added the KRG statement.

Trump is set to deliver a State of the Union Address on Tuesday that could affect aid coming to Iraq, as Trump increasingly pursues policies that rely less on intelligence and diplomatic assets and the US military on the ground.

The Kurdistan Region historically has welcomed a Western and American presence, believing it to be a bulwark against any possible action by Baghdad, Ankara, or Tehran.

The failure of the House of Representatives to mobilize members to hold an emergency meeting discuss the end of the US presence through military bases inside Iraq.
This comes at a time of conflicting positions within the Council, on the law of the removal of US forces, until it reached a difference in the positions of the President of the Council Mohammed Halbusi and his deputy Hassan al-Kaabi, especially after the confirmation of US President Donald Trump, the survival of its forces in Iraq;
Parliament Speaker Mohamed Halboussi said that Iraq still needs the efforts of the international community in the fight against terrorism, which is contrary to the position of Hassan al-Kaabi, his deputy for the alliance of others.
Halaboussi said that his country still needs the efforts of the international community in the fight against terrorism and to fulfill its obligations to Iraq and support his government.
Al-Halbusi said that the Iraqi parliament will work in coordination with Prime Minister Adel Abdul-Mahdi to know the actual need for foreign forces.
It comes hours after US President Donald Trump announced the maintenance of a US military base in Iraq so Washington could watch Iran.
“One of the reasons we want to keep US troops is because we want to watch Iran somehow because Iran is a real problem,” Trump said in an interview with CBS.
Despite the speaker’s speech, which appeared less severe, but a member of the Presidency of the House of Representatives Hassan al-Kaabi, said in a statement: “We deplore US President Donald Trump’s statement on the extension of the US presence in Iraq, and justified by monitoring neighboring countries.”
He added: “Everyone has the responsibility to act urgently; to end the US presence, and not to allow Iraq to be a launching pad for aggression or control of any state.”
He stressed that “the House of Representatives will work during the next legislative term, to enact a law that includes the termination of the security agreement with America, as well as the termination of the presence of trainers and advisers American and foreign military in Iraqi territory.”

“The head of the coalition of state law, Nuri al – Maliki, received in his office, Monday, the deputy head of the Kurdistan Regional Government Kebad Talabani and the delegation accompanying him.

During the meeting, they discussed all the issues on the political and security scene, and the ongoing dialogues in the Kurdistan Region to form a regional government, according to a statement by Maliki’s office.

“The two sides exchanged views on the political situation and the need to find a common understanding that brings together the political forces, in order to establish a new phase, which is one of its components political and security stability,” according to the statement.

Baghdad
Head of the Jordanian House of Representatives Atef Al-Tarawneh heads an official delegation to Baghdad on Tuesday for an official visit at the invitation of his Iraqi counterpart Mohammed Halboussi.
Al-Tarawneh heads a parliamentary delegation representing blocs and committees of the Council on a two-day working visit, during which he will meet the President of the Republic of Iraq Barham Salih, Prime Minister Adel Abdul-Mahdi, Speaker of the House of Representatives Mohammed Halbusi and heads of Iraqi parliamentary blocs.