US Secretary of State Mike Pompeo, who arrived on Wednesday, arrived in Baghdad on an unannounced visit, Speaker of the House of Representatives Mohammad Halboussi and other Iraqi officials. Pompeo is the third US official to visit Iraq within days, after US President Donald Trump and US Energy Secretary Rick Perry.

The news agency “AFP” a statement issued by the Iraqi Council of Representatives that “the Speaker of the House of Representatives Mohammed Halbusi received US Secretary of State Mike Pompeo, in the presence of the Committee on Foreign Relations parliamentary.”

The visit comes less than two weeks after the visit of US President Donald Trump to Iraq, during which he lost US troops without meeting any officials.

The US Secretary of State began on Tuesday from Jordan his tour of the region, and in his bag Iran’s hot file as well as the war against the dossier, terrorism and files of Syria and others.

In a press conference with his Jordanian counterpart Ayman Safadi, Pompeo stressed that the United States is redoubling its diplomatic and commercial efforts to “exert real pressure on Iran.”

The US minister stressed his country’s continued work with Jordan to “confront Iran’s malicious activities in the region and its attempts to circumvent sanctions.”

He pointed out that “Iranian expansion is a threat to the region and our withdrawal from Syria will not affect our confrontation with Iran, or to the da’ash, or to anyone who threatens regional security.”

Pompeo’s trip to the region comes amid confusion over conflicting statements by US President Donald Trump and senior US officials about the withdrawal of US troops from Syria, where Iran backs President Bashar al-Assad in the country’s civil war.

“The withdrawal from Syria will not reduce US efforts to marginalize Iran,” said Pompeo in Jordan, adding that “the White House has re-imposed sanctions on Iran for violating the nuclear agreement defended by former President Barack Obama.”

Pompeo’s visit is the third high-level visit by a US official to Iraq last month. Trump’s recent visit angered Iraqi politicians when Trump last month paid an unscheduled visit to the US base of Ain al-Assad in western Iraq without meeting Prime Minister Adel Abdul-Mahdi.

“The United States can use its bases in Iraq as a platform for continuing operations against state organization,” Trump said in a December 26 visit to Iraq.

Earlier in December, US Energy Secretary Rick Perry urged Iraq to “cut its dependence on energy on Iran and open up the energy sector to US investment.” He was in Baghdad with a trade delegation organized by the American Chamber of Commerce.

Pompeo is expected to arrive in Cairo later Wednesday.

BAGHDAD (Reuters) –
A US security source in Anbar province on Wednesday uncovered US patrols outside their combat bases in Anbar province.
The source told the correspondent of the agency / information /, “The US combat forces attended, today, to the stadium of Fallujah, under the pretext of participating in the ceremony ceremony of the Directorate of Fallujah police on the occasion of the annual celebration of the 97th anniversary of the establishment of Iraqi police.”
He added that “strict procedures were imposed around the venue of the celebration because of the presence of US combat forces.”
The source, who preferred not to be named, said that “the conduct of US forces sends a message that the Americans get the green light to roam outside their military bases in Anbar.”
The US forces had wandered last Friday in Mutanabi Street in the center of Baghdad under the pretext of escorting a foreign journalist in the street, amid popular responses and political anger, which considered the conduct of US forces a new occupation of Iraq. Ending 12 /

The President of the Republic, Barham Saleh arrived in Qatar on an official visit at the invitation of the Emir of the Gulf state, Tamim bin Hamad Al Thani.
“A formal reception ceremony will be held at the Emiri Diwan, followed by a round of important discussions,” a presidential statement said.
During the visit, Saleh will hold talks and meetings with senior Qatari officials aimed at strengthening brotherly relations between the two brotherly countries and raising them at all levels, in addition to discussing the developments of the political situation on the Arab and international arenas.
The visit comes as a continuation of the President’s visit aimed at activating the role of Iraq regionally and internationally and to strengthen his position between brothers and friends.
http://alforatnews.com/modules/news/article.php?storytopic=36&storyid=184631

The below is attributable to Deputy Spokesperson Robert Palladino:‎

Secretary Michael R. Pompeo met today with Iraqi Prime Minister Adil Abd al-Mahdi. The Secretary underlined the U.S. commitment to Iraq’s sovereignty and territorial integrity and U.S. support for the new Iraqi government’s efforts to deliver stability, security and prosperity to all Iraqis. The Secretary also discussed the recent territorial defeat of ISIS in Syria and the continuation of our cooperation with Iraqi Security Forces to ensure ISIS’ lasting defeat throughout the region. They also discussed U.S. support for Iraq’s energy independence.

(Baghdad: Al Furat News) The House of Representatives will resume on Thursday, its regular sessions to discuss a number of paragraphs on its agenda.
A statement to inform the parliament that tomorrow’s session includes “the continuation of the discussion of the federal budget law for the year 2019, as well as the first reading of the proposed amendment to the law of service and military retirement No. (3) for the year 2010.”
The statement also included the first reading of the proposal to amend the service and retirement law of the Internal Security Forces No. (18) of 2011, as well as the first reading of the draft law to address the abuse of housing, and put a general topic for discussion on the allocation of land plots for members of the defense and the interior.
He pointed out that “the session begins at one o’clock in the afternoon.” 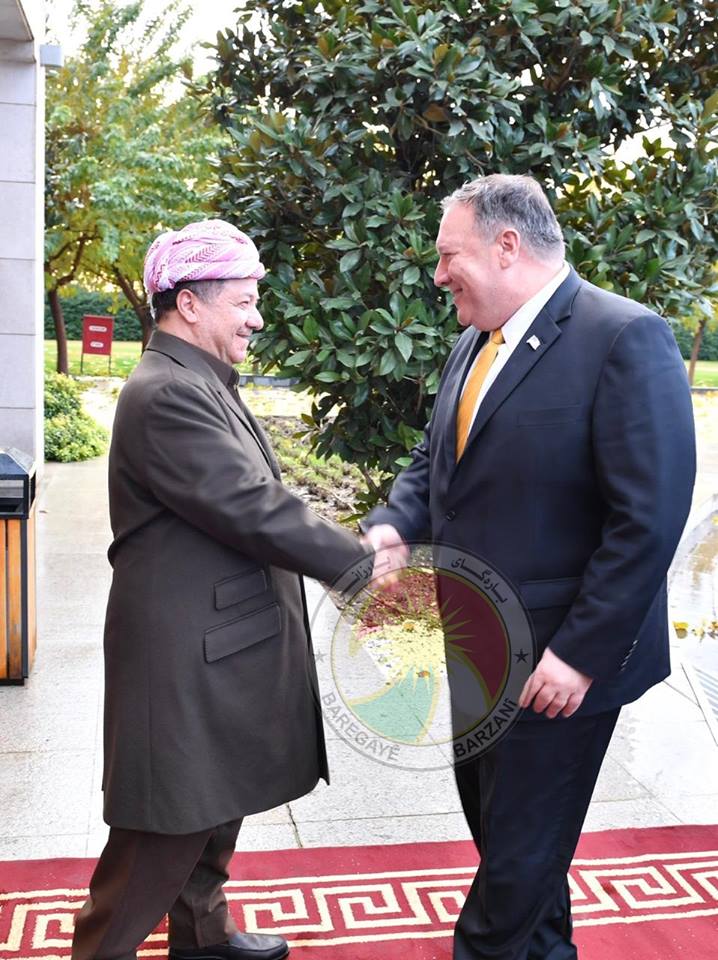 Great to meet the new Iraqi government and congratulate @AdilAbdAlMahdi, @BarhamSalih, @AlHalbooosii and @maalhakim in person and reinforce our bilateral ties. Look forward to working together on key regional issues and to supporting Iraq’s energy independence. 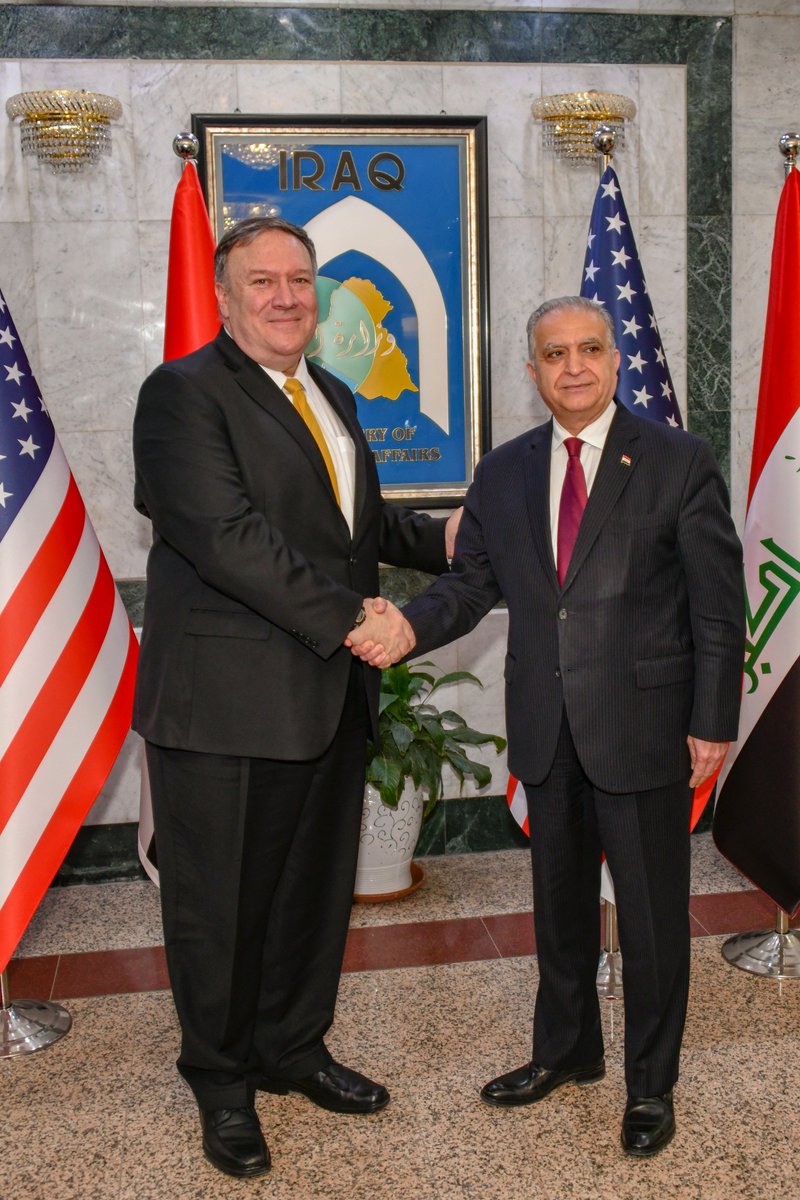 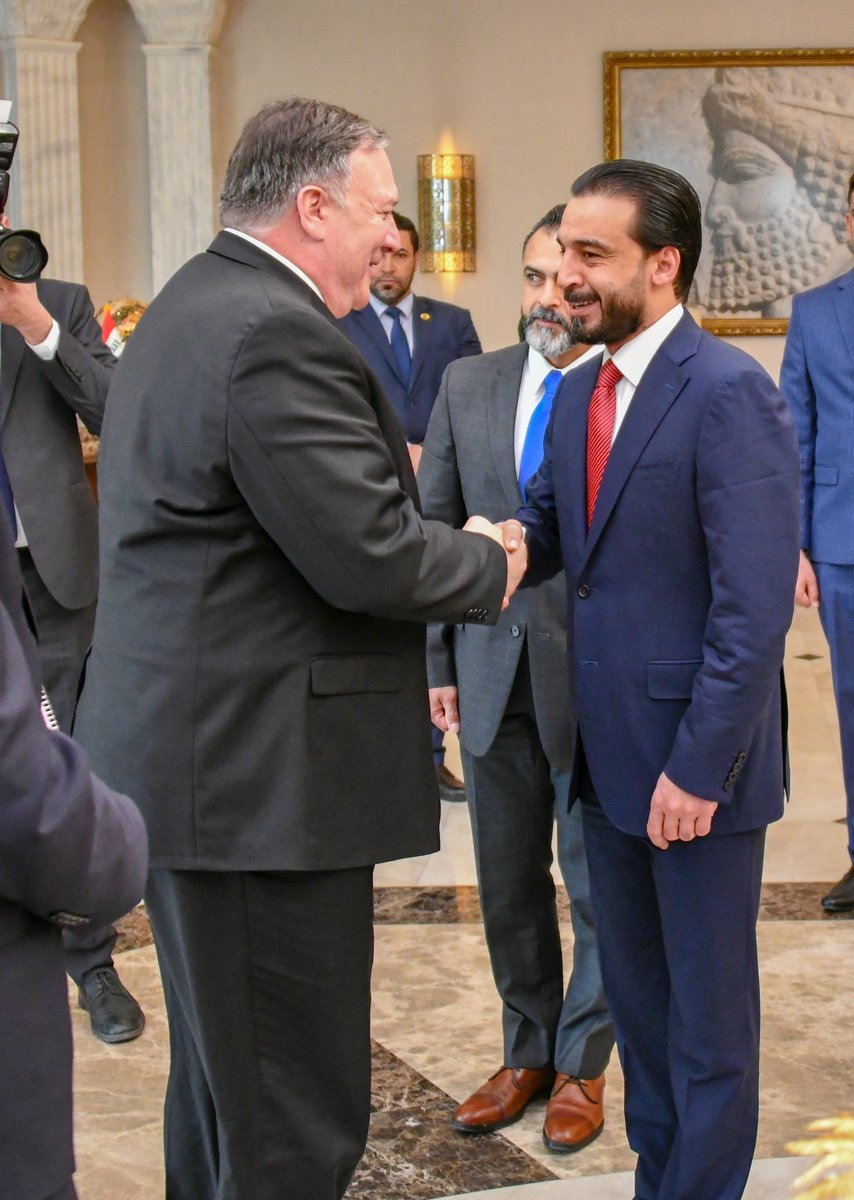 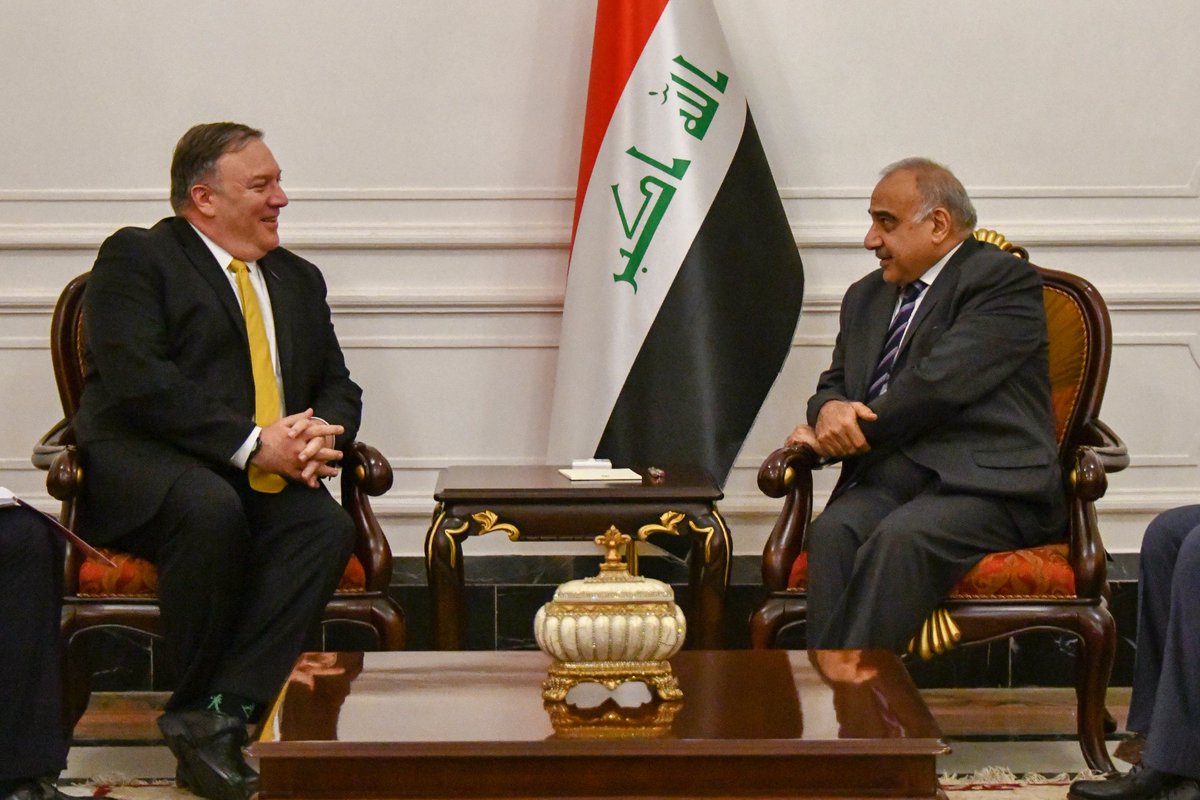 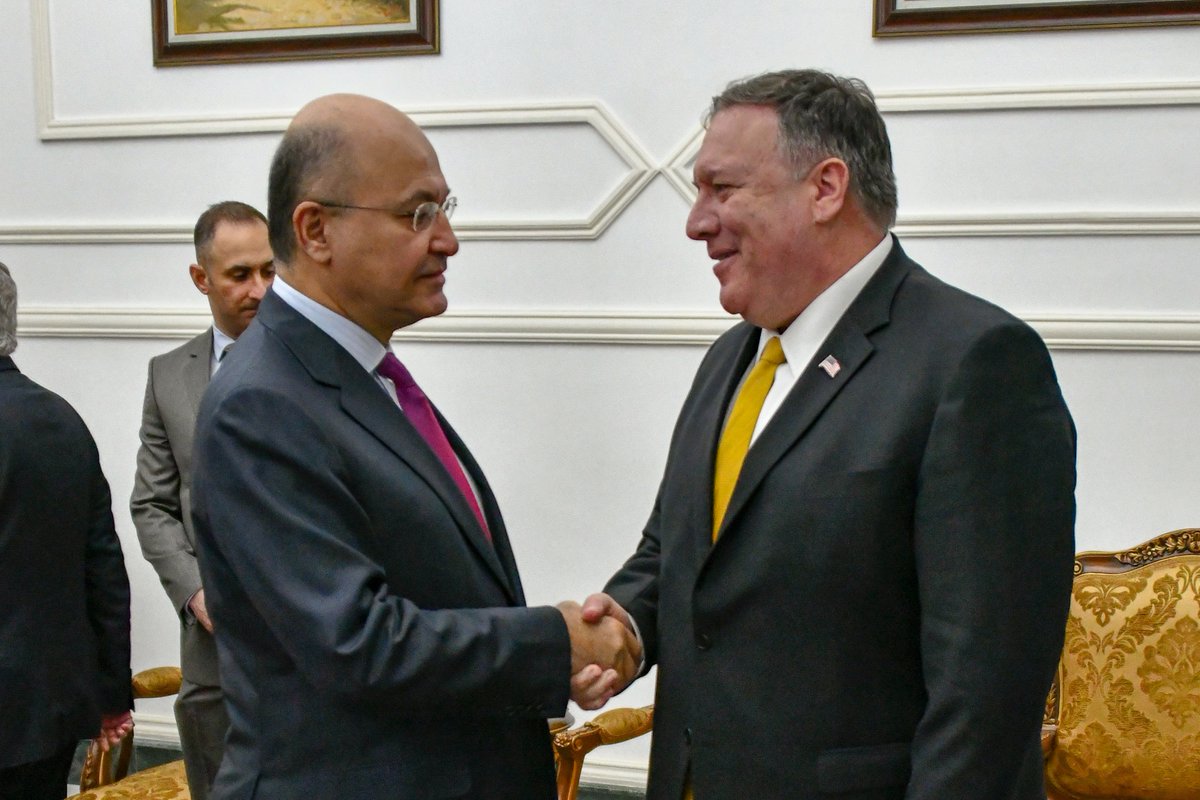 Mr. Mohamed Halboussi and a number of deputies of the Foreign Relations Committee received on Wednesday US Secretary of State Mike Pompeo and his accompanying delegation. During the meeting, they discussed bilateral relations between Baghdad and Washington and the activation of economic and investment cooperation between the two countries.

The United States considers Iraq an important and strategic partner in the political, economic and security fields, said US Secretary of State Mike Pompeo, expressing his country’s readiness to invest and contribute to the reconstruction of Iraq, especially its liberated cities.
“President Barham Saleh received US Secretary of State Mike Pompeo and discussed with him the latest developments in the political and security situation in the country and the region,” a presidential statement received by the Euphrates News Agency said today.
“The need for a constructive dialogue among all parties to achieve security and peace, to ease tension and instability in the Arab and regional arenas and to strengthen international and regional cooperation to end extremism and defeat terrorism once and for all,” Saleh said.
Saleh stressed during the meeting that “Iraq is keen to build balanced relations with all friendly and allied countries based on respect for sovereignty and constancy and independence of its national decision.”
The President of the Republic to “deepen the relationship between the two countries and develop them to achieve the common interests of the two friendly peoples, and the importance of the contribution of the American side in the reconstruction of Iraq and the advancement of its economy and the upgrading of all sectors.”
He praised “the support of the United States of America for Iraq politically and security, especially in its war against terrorism and achieve a great victory over gangs.”
For his part, renewed US Secretary of State “his government’s keenness to establish special relations with Iraq at various levels, stressing his country’s continuing commitment to fight against intimidation and terrorism.”