President Donald Trump on Saturday said he did not know Brett McGurk, the top US official leading the fight against the Islamic State group, and called him a “grandstander” for resigning over Trump’s decision to withdraw troops from Syria.

“Brett McGurk, who I do not know, was appointed by President Obama in 2015,” Trump tweeted . “Was supposed to leave in February but he just resigned prior to leaving. Grandstander? The Fake News is making such a big deal about this nothing event!”

McGurk, who served as the special presidential envoy to the 79-nation Global Coalition to Defeat ISIS, was indeed set to retire in February. But on Friday he announced he would resign early.

He told his colleagues in an email obtained by The New York Timesthat he could not in good conscience carry out Trump’s orders to withdraw 2,000 troops.

“The recent decision by the president came as a shock and was a complete reversal of policy that was articulated to us,” McGurk said in the email. “It left our coalition partners confused and our fighting partners bewildered.”

He continued: “I worked this week to help manage some of the fallout but – as many of you heard in my meetings and phone calls – I absolutely concluded that I could not carry these new instructions and maintain my integrity.”

McGurk’s resignation came one day after the resignation of Defense Secretary Jim Mattis, who wrote a blunt letter telling Trump he had “the right to have a Secretary of Defense whose views are better aligned with yours” on issues such as respecting US allies and condemning its enemies.

Trump’s decision to withdraw the troops triggered condemnation across the political spectrum, with many Republicans condemning the decision out of fear that such a move would invigate US foes and pave the way for an ISIS resurgence.

But in another tweet on Saturday night, Trump accused the media of unfairly criticizing him over the Syria decision.

“If anyone but your favorite President, Donald J. Trump, announced that, after decimating ISIS in Syria, we were going to bring our troops back home (happy & healthy), that person would be the most popular hero in America,” he said. “With me, hit hard instead by the Fake News Media. Crazy!” 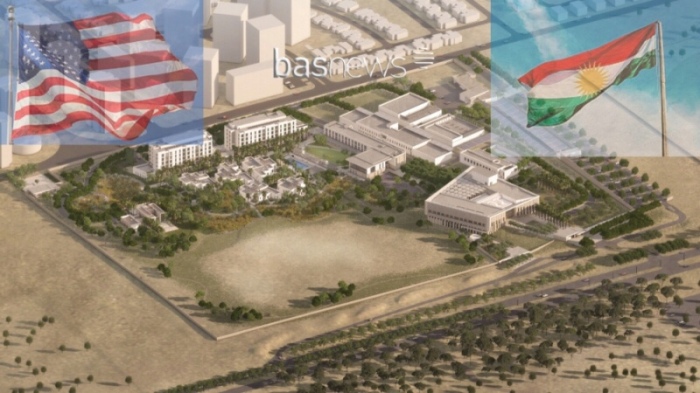 ERBIL – The United States is reportedly trying to strengthen its presence in the Kurdistan Region, a report said, pointing out that those US forces who are expected to be pulled out of Syria, will be stationed in Erbil province.

Earlier on Wednesday President Donald Trump said that he would withdraw the US troops from Syria, stating that the war against the Islamic State (IS) is over in the region and that the militant group was defeated.

Iraqi Media al-Hurra TV channel cited an official from the US Department of Defense as saying that his country would soon evacuate 2,130 soldiers from Syria and that will deploy them to Kurdistan Region’s Erbil province.

Earlier the year on April 23, US Ambassador to Iraq Douglas Silliman announced the establishment of a new Consulate building in Erbil in cooperation with Kurdistan Region (KRG).

“The building will be a tangible sign to the continuous commitment of the US to engage with and assist the KRG and its people to build a strong region, within a unified, democratic, and prosperous Iraq,” the US envoy was quoted by Kurdistan 24 during a press conference in Erbil where the former Consul General Ken Gross was attending, as well.

ERBIL – Iraq has strengthened its forces on the border areas with Syria as the US President Donald Trump has announced the withdrawal of his country’s forces from the region, a military official said.

Capt. Najm Abdul Latif, commander of Al-Jazeera and Al-Badia operations, said that joint forces have reinforced their presence in some border areas with Syria since last Thursday.

On Wednesday evening Trump said that he believes the Islamic State (IS) has been defeated and therefore announced the start of the withdrawal of his country’s troops from Syria without setting a timetable.

Meanwhile, Iraqi political and security analyst Hamid al-Akashi said on Friday that the withdrawal of US troops from Syria will not affect the security situation in the border and western areas of Anbar, since the US troops have several military bases there.

“The withdrawal of US forces from the Syrian areas near the Iraqi border gradually will not affect the security of the Iraqi areas,” Akashi told BasNews. 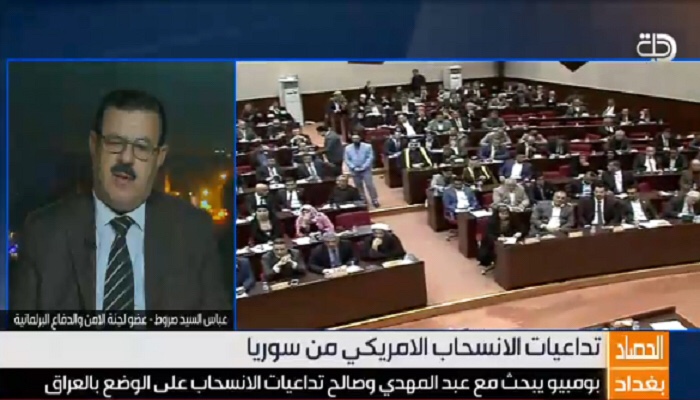 A member of the parliamentary security committee, Abbas Srout said in a statement to (Tigris) that   The US withdrawal from Syria necessitates an intensification of the Iraqi effort to control the border through the development of military and technical capabilities and the use of technology and sensors, as well as thermal surveillance cameras

With regard to the resignations of US Defense Secretary James Matisse and the US envoy to the international coalition, Brett McGurk, he said

Mr. Sarout said that it would not affect the situation of Iraq, but the status of US President, saying that the US president thinks of a commercial commentality and not a political mentality in all files dealt with internally and internationally and at all levels and on the Turkish move in northern Iraq,

Mr. Srout pointed to the need to respect national sovereignty and non-interference in the internal affairs of the countries and said that Turkey is a neighbor and friendly country and Iraq should prevent the threats of the Workers Party for its security and stability.

ERBIL – Iraqi PM Adil Abdul-Mahdi will submit five new candidates to the parliament for the remaining ministerial posts, a lawmaker revealed on Saturday.

Badir al-Ziyadi, an MP from Sa’eroun Alliance led by the Shi’ite cleric Muqtada al-Sadr, told BasNews that Abdul-Mahdi wants to present five new nominees “as he knows well that the MPs will not approve the current ones.”

“This week will be decisive for concluding the new cabinet before the end of this year,” al-Ziyadi said.

The Council of Representatives is expected to hold a session on Sunday in hopes of voting on the five nominees and fill the remaining ministerial posts.

revealed a parliamentary source in the Finance Committee, Saturday, for determining the share of the Kurdistan region in the budget of 2019 by 12% and determine the price of a barrel of oil to $ B56 per barrel.

The source said in a statement to the agency / information / “The share of the Kurdistan region proved in the budget of 2019 by 12%, despite demands by the Kurds to raise it to 14%.”

He added that “the price of oil mileage was set at $ 56, despite the fluctuation of prices between the rise and fall,” noting that “the paragraph fix the employees of the contracts of the Ministry of Electricity was added formally to the budget and with the consent of all members.”

The source explained that “the budget is subject to changes during the next amendments,” noting that “it is hoped that the second reading of the budget session next Monday.”

The House of Representatives has finished, last Thursday, the first reading of the budget bill 2019

{International: The Euphrates News} Washington’s envoy to the International Alliance is presenting a petition against Bret Meckgorek’s resignation before his departure in February.

After the defense minister, “Brett McGork” resigns from his post

resigned US President’s envoy for international coalition, Brett McGork, from his office in protest against the decision to withdraw from Syria

and the network said “McGurk submitted his resignation on Friday,” adding sources, that ” Mike Pompeo, that he will accelerate his departure for a fierce dispute with Trump about his decision to withdraw the withdrawal of 2,000 US troops from Syria, “pointing out that McGork,” was planning to leave his post in February next year. ”

US President Donald Trump announced last night the resignation of Defense Secretary James Matisse from office at the end of February 2019.

Matisse’s resignation came just one day after Trump announced the withdrawal of US troops from Syria within 100 days. From Afghanistan.

In a letter to Trump, Matisse said, “His view of the world, which tends to traditional alliances and countering malignations, runs counter to the president’s views.”

“Because you have the right to have a defense minister whose views are better aligned with your views on these and other issues, I think it is right for me to step down,” he said. 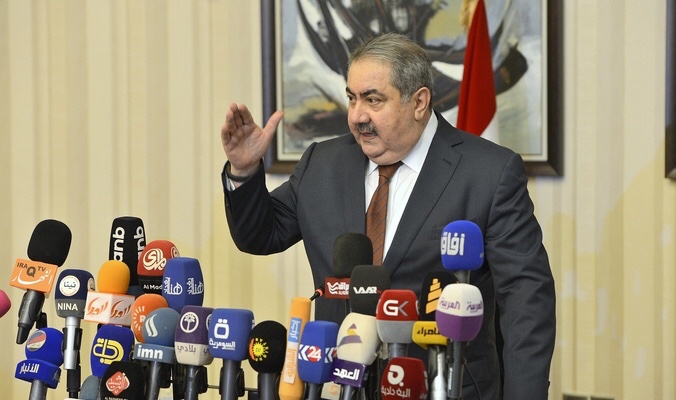 The leader of the Kurdistan Democratic Party (KDP) Hoshyar Zebari on Saturday praised the resignation of the special envoy of the international coalition against Saddam Hussein in Iraq and Syria.

He added that the decision to resign was “wise and timely”.

US special envoy to the International Coalition against Saddam Hussein in Iraq and Syria, Brett McGurk, has resigned.

The Associated Press quoted a US official as saying that Ma Kubork had resigned.

McGraw’s resignation is the second resignation of a security official in Donald Trump’s administration because of the decision to withdraw US troops in Syria after the resignation of US Defense Secretary James Matisse.

McGregor raises the number of US officials who left the Trump administration to 22 officials. 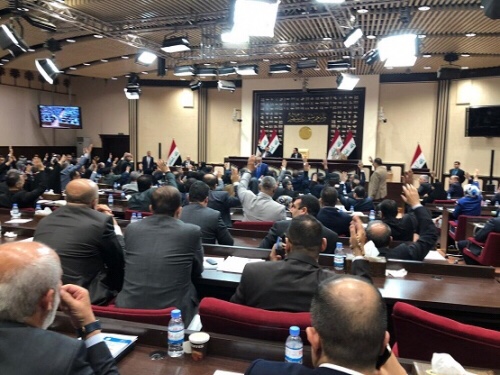 (Baghdad: Al-Furat News) A member of the Finance Committee of Parliament, Siham al-Musawi, on Saturday, a surprise for the federal budget for the year 2019.

“There is a series of meetings and discussions that will precede the adoption of the budget to read the second reading in the next Monday’s session, which will be subject to discussion and comments before approval, which may take a month or more.”

Moussaoui described the budget as “miserable and does not contain any change from its predecessors,” noting that “the parliamentary finance presented to the Ministerial Committee 47 observations, but the latter took only one observation in terms of the development of the regions and increased to 2 trillion.”

She pointed out that “the Kurds got their full credit in the budget of 2019, and we do not expect to be delayed recognition by the region, but a number of other things.” 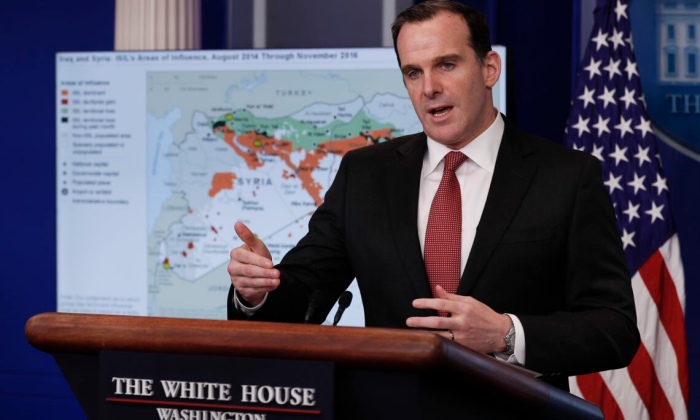 US President George W. Bush’s special envoy to the international coalition against Saddam Hussein in Iraq and Syria has offered to step down.