[Ayna-Baghdad]
President Barham Saleh discussed with Prime Minister Adel Abdul-Mahdi meet the legitimate demands of the people in all governorates.
The Presidency of the Republic said in a statement received by the agency of all Iraq [where] a copy of it today that “President Barham Saleh, discussed in Baghdad on Thursday evening, with Prime Minister Adel Abdul Mahdi, the most important events and political developments in the region. The region away from escalation and tension, and the need to rely on calm and serious dialogue to spare the region more conflicts. ”
The president stressed the importance of supporting the government and its efforts to implement the governmental platform adopted by the political and national forces, pointing out “the importance of unity of national ranks and strengthening the cohesion among the national forces in order to achieve what citizens aspire to improve services and provide job opportunities.”
He called on “to meet the legitimate demands of our people in many of our provinces and cities dear For his part, the Prime Minister reviewed the security developments in the country and future plans to improve services to citizens.”
http://www.alliraqnews.com/modules/news/article.php?storyid=79851
Advertisement

Twilight News / The House of Representatives began the first reading of the draft federal budget for the Republic of Iraq for fiscal year 2019.

The bill faces differences in regard to the share of the Kurdistan Region and financial demands for the province of Basra in the south of the country or areas liberated from the grip of Daash.

The new Iraqi government, headed by Adel Abdul Mahdi, agreed on Sunday to send the draft of the 2019 budget to parliament to vote on it, estimated at 128.4 trillion Iraqi dinars (107 billion dollars), with a financial deficit of up to 20 billion dollars, Oil at $ 56, with oil revenues accounting for about 99 percent of Iraq’s income.

The price of Brent crude is about $ 80, while international investment banks expected to reach about $ 100 next year, pointing out that the price forecasts come in the possibility that US sanctions on Iran to reduce the global supply.

The share of the Kurdistan region and allocations Basra is the subject of serious dispute in the budget this year, before reaching the government of Haider Abadi previous to reach consensus with the main blocks in parliament to pass.

(Arbil: Euphrates News) The Kurdistan Regional Government announced on Thursday, the disruption of official presence in the region next Tuesday on the occasion of the birth of Christ.

The official spokesman for the regional government, Sven Dzei, in a statement received by the {Euphrates News} copy of it today that it was decided to disrupt the official time on the occasion of the birthday of Jesus Christ, p congratulating all Christians in the region and Iraq and the world, hoping that the occasion is a source of mutilation cohesion And national unity.

“He added that” on Tuesday 25 December 2018, an official holiday in all government departments and institutions on the occasion of the birth of Christ. ”

{Baghdad: Al-Furat News} Cabinet decided to disable the official time for three days on the occasion of the New Year 2019.

According to the Secretariat of the Council of Ministers, the holiday will be “on Sunday and Monday, 30 and 31 December, as well as on Tuesday, 1/1/2019 to celebrate the New Year holidays.” 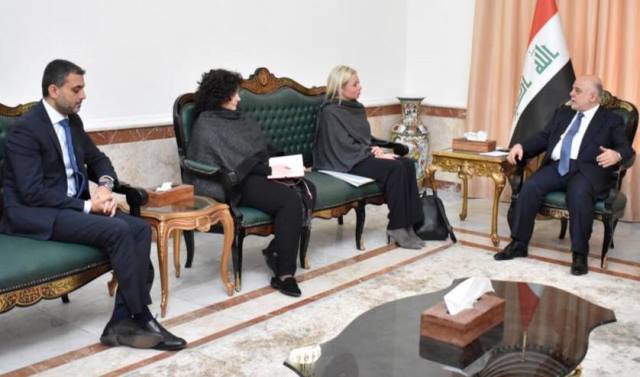 BAGHDAD (
Reuters) – The UN’s representative in Iraq, Genin Hennes, confirmed Thursday that the world body would continue to support Iraq.
“The latter received the representative of the new UN Secretary-General in Iraq, Jenin Hennes, and the accompanying delegation. At the beginning of the meeting, al-Abbadi blessed Hennes as head of the UN mission in Iraq,” the statement said. For his aspiration to continue the United Nations programs and support Iraq in the reconstruction and other programs. ”
The meeting also discussed the future plans of the United Nations and its important role in Iraq, as well as a review of what has been achieved during the last period, and discussed the political situation and the importance of political and security stability in Iraq because of its impact on the provision of services to citizens as well as the completion of the return of the displaced and the reconstruction of cities “He said.
“Iraq has achieved great victory over terrorism and the country enjoys security stability, renounce sectarianism, unite the country and establish privileged relations with the world. We look forward to the completion of these achievements by the current government,” Abadi said.
While Hines praised the leadership of Abbadi to Iraq during the last period, and stressed that “the United Nations will remain supportive of Iraq and its people.”

US President Donald Trump on Thursday defended his surprise decision to declare victory over the Islamic state and withdraw US troops entirely from Syria amid criticism from some Republicans and the concerns of allies and some US military commanders.
Trump said in a series of Twitter tweets early on that he was meeting a pledge made during his campaign in 2016 to leave Syria. He wrote that the United States was doing the work of other countries, including Russia and Iran, for no fee, and “it is finally time for others to fight.”
Trump announced on Wednesday that he would begin withdrawing US troops of some 2,000 troops from war-torn Syria, but the White House did not set a timetable.
Some Republicans vehemently criticized the move, saying they had not been informed in advance and the move would give Russia and Iran the biggest support of Syrian President Bashar al-Assad.
US commanders, speaking on condition of anonymity, told Reuters commanders on the ground were also concerned about the consequences of a quick withdrawal.
Other officials also told Reuters that Trump’s decision to withdraw his forces from Syria would also end air strikes against a preacher there.
“Going out of Syria was no surprise,” Trump wrote on Twitter. I have been asking him for years, and six months ago, when I publicly expressed my strong desire to do so, I agreed to stay longer. Russia, Iran, Syria and others are the local enemy of the Islamic state. We do their job. It’s time to go home and rebuild. ”
“Do you want the United States to become a policeman in the Middle East, and to get nothing but precious lives and trillions of dollars to protect others who almost never do what we do? Do we want to stay there forever? It is finally time for others to fight. “

A security source in the province of Arbil, the Kurdistan region of Iraq, on Thursday, the establishment of US forces a new base is the fifth of its kind in the region, pointing out that the establishment of the base comes within the framework of increasing the number of US troops in the northern regions.

The source said in a statement to “Al-Maaloumah” that “American forces have established a military base in the area of ​​silk in Shaklawa district northeast of the province of Arbil, within the plan to increase the number of US troops stationed in the northern regions of the country.”

The source added that “this base is the fifth of its kind for US forces in the northern regions with the consent of the Kurdistan Regional Government on the establishment of these bases, which are under the administration of US forces,” noting that “the base of a large number of US troops equipped with various weapons, aerial”.

Local officials in Anbar province, west of Iraq, revealed in previous statements to Al-Maaloumah that American forces had established two new bases in Qaim district adjacent to the Iraqi-Syrian border.Ending 12 /

The United States has extended for 90 days the deadline for Iraq to import electricity from Iran, allowing Baghdad to bypass sanctions imposed by Washington over Tehran over its nuclear program, a government source involved in the talks said on Thursday.

On Nov. 5, Iraq was exempted from 45 days of US sanctions on Iran over its nuclear program and was supposed to devise a road map that would eliminate Baghdad’s full reliance on Iranian electricity and gas.

A few days before the deadline, a delegation of Iraqi officials went to Washington to negotiate an extension of the grace period, two sources told AFP.

The government source involved in the talks in Washington to AFP that Iraq is within the extension of the deadline for a period of 90 days, so that Iraq can continue to buy Iranian electricity and gas.

Asked whether the United States had pressed the Iraqi delegation to engage in a partnership with US companies to fill the gap, the source said the issue was part of “complex discussions.”

A power shortage that often leaves homes without electricity for up to 20 hours a day is a key factor behind weeks of major protests in Iraq during the summer.

To overcome this shortfall, Iraq imports up to 28 million cubic meters of natural gas from Tehran to its factories and directly buys 1,300 megawatts of Iranian electricity.

This dependence is uncomfortable for the United States, which sought to curtail Tehran’s influence and re-impose sanctions on Iran’s financial institutions, shipping lines, the energy sector and oil products.

Last week, US Energy Secretary Rick Perry discussed sanctions with Iraqi oil and electricity ministers in Baghdad, saying Baghdad had to open doors to US companies to achieve energy independence.

“Working together, the United States and Iraq can develop oil, gas and water industries,” Perry said.

The Ministry of Electricity of Iraq to the possibility of stopping the import of Iranian electricity within two years, but the issue of gas import is the most difficult. It needs Tehran gas until it has the capacity to extract its gas or invest gas burned during the extraction of oil.

According to the World Bank, the waste of burned gas in Iraq is about 2.5 billion dollars a year, enough to bridge the gap in the generation of gas from Iraq.

Another source familiar with the negotiations document, AFP, that the United States seeks to convince Iraq in partnership with “General Electric” and Baker Hughes “and” Orion “to invest gas burned.

“The United States is telling Iraqi officials that it is a lucrative operation for the three parties,” he said, adding that they “stop relying on Iran, invest their gas and benefit American companies in this process.”