The head of the House of Representatives, Mohamed Halabousi, arrived Monday with a parliamentary delegation to the Saudi capital of Riyadh on an official visit in response to an invitation from the chairman of the Saudi Shura Council.

“Al Haboussi, accompanied by a parliamentary delegation, arrived in Riyadh on an official visit where he was received by the chairman of the Saudi Shura Council Sheikh Abdullah bin Mohammed Al-Sheikh and a number of members of the council and officials,” the information office said in a statement. Baghdad, 16 December 2018 – Ms. Jeanine Hennis-Plasschaert on arrival at Baghdad airport Sunday night to take up her responsibilities as SRSG for Iraq and head of UNAMI. 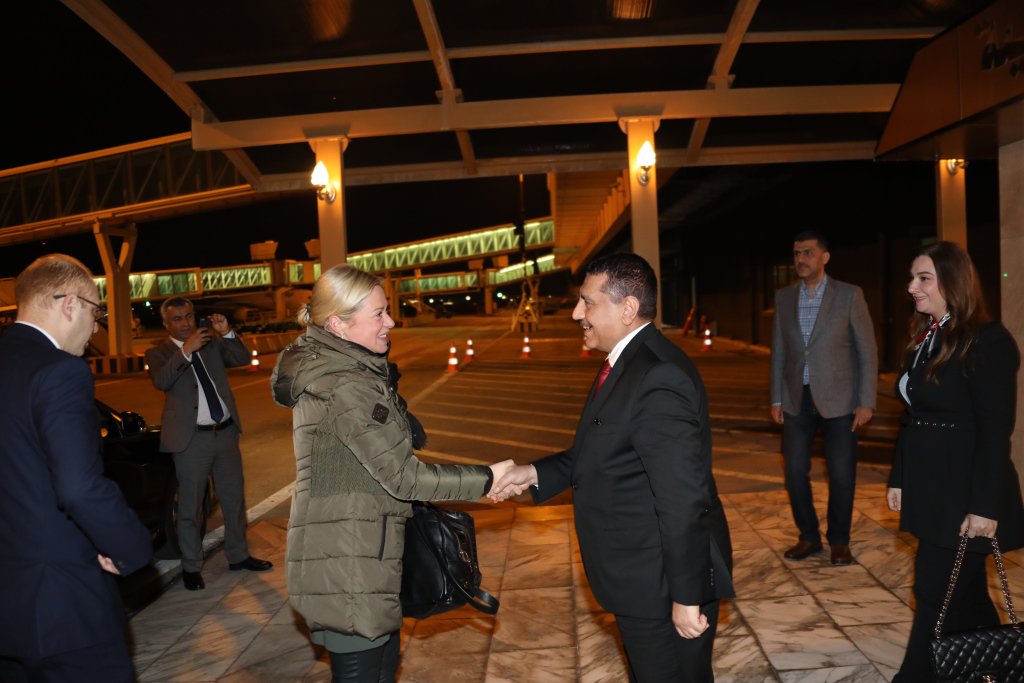 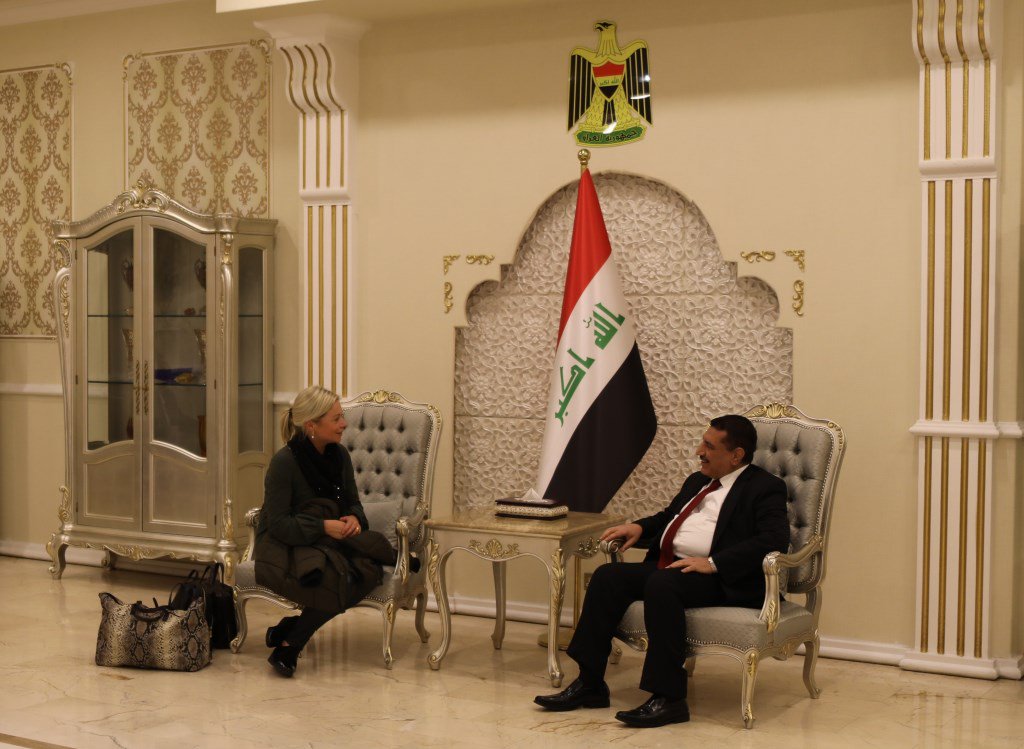 BAGHDAD – Transport Minister Abdullah Luaibi on Sunday called on US Ambassador to Iraq Duklas Sulaiman to translate their support for Iraq on the ground by supporting rail projects and developing the infrastructure of Iraqi airports.

“Today, the US ambassador to Iraq, Duaa Sulaiman and his accompanying delegation met to enhance bilateral cooperation between the two countries and expand the horizons of joint action in all fields of transport,” the ministry’s media said in a statement received by Iraq News.

He added that “we discussed during the meeting how to lift the ban on Iraqi aircraft in the global atmosphere and move forward to complete the project of the port of Faw because of its role in the future active in accelerating the country’s economic wheel.”

He pointed out that “was addressed how to rehabilitate the reality of the railway in Iraq and linking it to neighboring countries and the construction of new stations to facilitate the process of transporting goods and passengers between the provinces.”

For his part, the US ambassador in Iraq promised “to provide all the necessary means to support Iraq in the fields of transport, which will enhance the reality of bilateral cooperation between the two countries

BAGHDAD / The leader of the Islamic Dawa Party, Jassim Mohammad Jaafar, on Sunday, revealed the ministries of the Alliance of Sason, supported by the leader of the Sadrist movement Moqtada al-Sadr, the government of Adel Abdul Mahdi.

Jaafar said that “the person who was able to play during the process of forming the government of Abdul-Mahdi well for the nomination of some people are the alliance of others,” noting that “the alliance of the other won four important ministries, namely (oil – foreign – electricity – health ).

The leader of the Dawa Party that “these ministers, were nominated through the electronic window, but there was an agreement to pass them and chose them.”

While a political source familiar with earlier, that the post of governor of the Central Bank in the new government formation, “a solution” to a loyal figure of the leader of the Sadrist movement, Moqtada al-Sadr, indicating that the agreement on the post was after talks between the alliance, “Sarun” and the opening.

Information / special …
The Finance Committee of the parliamentary, on Sunday, the date of approval of the federal budget for 2019, and pointed out that the budget will be approved during the three months of next year, attributed to the instability of the prices of the sale of world oil and its decline suddenly and large.
The Committee member Siham Shannon told the agency / information /, “The draft federal budget law for the year 2019 will be subject to discussion and reading and voting within the parliament during the three month of the beginning of next year,” noting that “the decline in world oil prices caused delays in the adoption of the federal budget” .
Shannon added that “the parliamentary finance seeks in cooperation with the Ministry of Finance to reduce the price of selling barrels of oil within the budget without 50 dollars for not entering the country with a large fiscal deficit during the new budget,” indicating that “the final price will be put during the meeting of Finance Parliament and Finance Minister Fouad Hussein In the coming days. “
“The reduction of expenditures in the federal budget will include not only unimportant expenses without prejudice to expenses related to staff,” explaining that “the Finance Committee seeks to expand the grades of unemployed graduates.”
Earlier, UBS had expected oil prices to rise to $ 85 over the next six to twelve months, boosting expectations for the Middle East. End 25 T 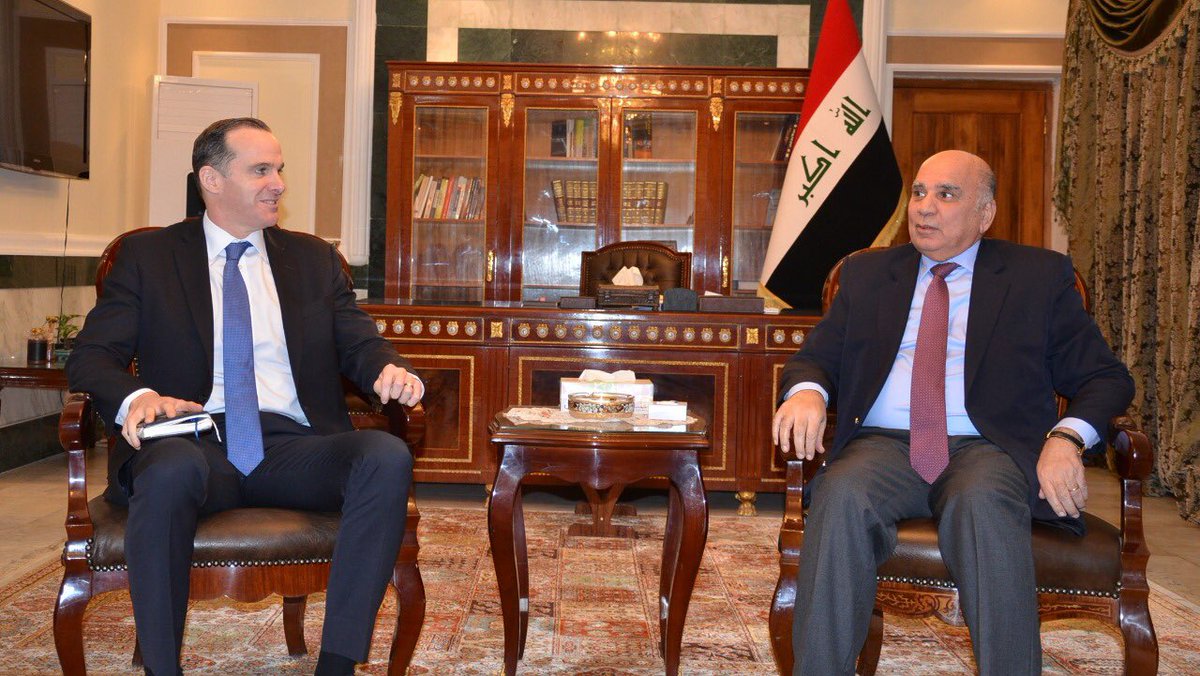 In the presence of Fayadh .. Abdul Mahdi leads the meeting of the National Security Council

[Baghdad: Al-Furat News} A deputy for the Badr parliamentary bloc said that in case not passed the House of Representatives Faleh Fayyad to the bag Interior will resort to Prime Minister Adel Abdul Mahdi to replace.

The deputy Mahdi Taki told the {Euphrates News}, on Sunday, that “the authorization of the political blocs to Abdul Mahdi paid to the nomination of Faleh Fayadh to the bag of the interior and insist on it, either in the event not passed in the House of Representatives will be changed.”

He pointed out that “the military alternative to Fayyad would be very appropriate, and that the names are from the military leaders, but no decision was taken on them.”

The mass of Asuron has confirmed its refusal to nominate Fayadh to take over the Ministry of the Interior, while confirmed the sources of the nomination of military leaders of those referred to retirement to take up the post. is over

Alsumaria News / Baghdad
The leader of the National Coalition Iyad Allawi, on Sunday, the Amir of Kuwait Sabah al-Ahmad al-Sabah to form a high committee to follow the results of the conference to support Iraq held in his country last February, while the morning that Kuwait will spare no effort to support and support Iraq.

Allawi said in a statement that he met with Kuwait’s Amir Sabah Al-Ahmad Al-Jaber Al-Sabah, who met with Kuwait’s Amir, the government and people at the beginning of the meeting. Support Iraq “.
Allawi praised “Kuwait’s support for Iraq during its war against gangs and called for terrorism, particularly in the humanitarian and humanitarian fields.”

Allawi said he “wished the prince to form a high committee to follow up the results of the conference, in addition to the wise positions of the Amir on Arab and regional issues and issues.”

Allawi also pointed out that “the meeting touched on a number of issues and issues concerning the bilateral relations between the two brotherly countries and the importance and necessity of promoting them to develop them.” He stressed that “Iraq is an important stabilizing factor in the region and Arab and regional efforts should be aimed at enhancing its security and unity. Effective return to the Arab and international systems. “

For his part, Amir of Kuwait, according to Allawi’s statement, stressed “the depth of historical and brotherly relations between the two brotherly countries.”

Kuwait hosted an international conference on Iraq’s reconstruction on February 12, 2018, about two months after the Iraqi government announced the end of the fighting and the defeat of the official “Da’ash” organization.

Donor pledges on the third and final day of the conference reached about $ 30 billion.

BAGHDAD / A parliamentary source revealed on Sunday the intention of Speaker of the House of Representatives Mohammed Halbusi to go to Saudi Arabia.

The source said, “Al-Iraq News”, that “Halabusi will go today or on Monday, a visit to Saudi Arabia, heading an Iraqi parliamentary delegation.”

The source, who asked not to be named, said that “the visit of Halbusi will take one day, he intends to return to Iraq, before Tuesday, to chair the session of the Iraqi parliament, which is dedicated to vote on the supplement cabinet cabinet of the government of Adel Abdul Mahdi.”