(Baghdad: Al-Furat News) revealed a source familiar with the nomination of Prime Minister, Adel Abdul Mahdi, to two new names to take over the functions of the Ministries of Interior and Defense.
The source told the news agency, “Al-Furat News” that “Abdul-Mahdi nominated both Lieutenant General Talib Shagati, commander of the anti-terrorism to take over the functions of the Ministry of Defense, while retired retired Lieutenant General Abdul Ghani al-Asadi – the former commander of counter-terrorism forces – to take over the functions of the Ministry of the Interior in accordance with a preliminary political agreement “He said.
“This is the first time that the political blocs exceed the theory of components and political custom and nominated two officers of one component of the security ministries.”
The House of Representatives, has failed in several sessions in the past weeks, pass the candidates for the rest of the Cabinet because of the sharp disagreement between them between the political blocs, especially the Ministries of Interior and Defense.
And remained the coalition of construction, especially the Fatah alliance affiliated with him, adhering to his candidacy Falih Fayad for the bag of the interior, which was met with a strong rejection of the Alliance of Reform and Reconstruction, especially going.
An informed source revealed last Wednesday that the Prime Minister, Adel Abdul Mahdi, identified the alternative candidate for Fayadh, to fill the position of the Interior and is one of the current agents of the Ministry, a senior officer. ”
And 8 ministries are still vacant in the government of Prime Minister Adel Abdul Mahdi because of this dispute , The interior, defense, justice, planning, education, higher education, migration, displaced and culture
The parliament is scheduled to hold next Tuesday its usual amid cautious optimism to resolve differences and pass candidates.
http://alforatnews.com/modules/news/article.php?storytopic=36&storyid=182380
Advertisement

(Baghdad: al-Furat News) A leader in the Badr parliamentary bloc, said that “the head of the Fatah alliance Hadi al-Amiri hinted to end the crisis of candidacy Faleh al-Fayadh to the portfolio of the Interior Ministry, and chose a military figure instead of him for the post.
The deputy Fakhri Sudkhan told the {Euphrates News} that Amiri “hinted to end the crisis of candidacy of the thorny Fayadh, which hindered the political situation, security and economic and all what the ministers in general, as well as the disruption of a variety of things because of different visions and political differences, which led him to resolve the matter and the nomination An alternative to the blackness of the security hierarchy. ”
“The Alliance for Reform and Reconstruction wants to be a candidate for the ministries of interior and defense professionals and military cadres, which has a long service and sales in the military field,” adding that “the character is on the way to retirement and the contributors to the liberation of Iraq from the dashing.”
The House of Representatives, has failed in several sessions in the past weeks, pass the candidates for the rest of the Cabinet because of the sharp disagreement between them between the political blocs, especially the Ministries of Interior and Defense.
And remained the coalition of construction, especially the Fatah alliance affiliated with him, adhering to his candidacy Falih Fayad for the bag of the interior, which was met with a strong rejection of the Alliance of Reform and Reconstruction, especially going.
An informed source revealed last Wednesday that the Prime Minister, Adel Abdul Mahdi, identified the alternative candidate for Fayadh, to fill the position of the Interior and is one of the current agents of the Ministry, a senior officer. ”
And 8 ministries are still vacant in the government of Prime Minister Adel Abdul Mahdi because of this dispute , The interior, defense, justice, planning, education, higher education, migration, displaced and culture
The parliament is scheduled to hold next Tuesday its usual amid cautious optimism to resolve differences and pass candidates.
http://alforatnews.com/modules/news/article.php?storytopic=36&storyid=182375

The head of the Iraqi Council of Representatives, Mohammed Halbosi, Thursday (December 13, 2018), to the province of Erbil, in the Kurdistan region.

MP Heibat Al Halbusi, on Thursday, called on Prime Minister Adel Mahdi to submit the names of leaders and commanders in the defense in front of the parliament, in order to vote on them and end the file management of the posts by proxy.

Al-Halbusi said in a statement received today (Baghdad today) that “there is growing concern for the transactions of commercial degrees assigned to citizens and in various ministries, especially in the liberated provinces, as well as attempts to circumvent the injustice of the children who fought and abandoned and deprived of the elements of safe life by gangs, .

A member of the House of Representatives for the province of Anbar, that “the attempt to pass the sale of grades employed by the gangs of some executives in the ministries and deliberately violating the instructions and violating the Constitution and the deprivation of Iraqis from the liberated areas of their right to appoint, will not go unpunished and without accountability regardless of the position or Location of the person concerned “.

Al-Halabousi, Commander-in-Chief of the Armed Forces and Chief of Staff of the Army, held responsibility for the decisions and actions of Lieutenant-General Abdul-Amir Al-Zaidi, Assistant to the Army Chief of Staff for Al-Meera Affairs, for his direct role in not disclosing the criteria and mechanisms adopted by the Ministry of Defense in its appointments, Without considering the actual need of the provinces, which constitute the liberated provinces, particularly Anbar priority in the degrees of appointment to ensure the security and stability of cities and support for its fighters in the defense of the borders of the homeland and enhance the security of Iraq.

He renewed his demand to the House of Representatives and the Commander-in-Chief of the Armed Forces to “submit the names of commanders and commanders to vote in the House of Representatives and to terminate the file of the administration of positions by proxy and in accordance with the plan of the Ministry of Defense Executive and specified in the government program voted on to ensure the efficiency of military and security performance and enhance stability in the provinces and Iraq” .

URGENT Deputy reform: the next meeting to complete the cab after a political breakthrough

ERBIL (Kurdistan 24) – With security and stability on the rise in Iraq and the Kurdistan Region, there is “precious opportunity” for investment and rebuilding the region’s economy, an American official said on Tuesday.

The United States Secretary of Energy, Rick Perry, made the comments in Erbil upon his arrival in the regional capital during a joint press conference with Kurdistan Democratic Party (KDP) leader Masoud Barzani.

Perry had earlier sat with Iraqi Prime Minister Adil Abdul-Mahdi in Baghdad before meeting with Barzani, noting in the press conference that he had productive meetings and is looking forward to a permanent agreement between Baghdad and Erbil.

Addressing reporters in Erbil, the US official highlighted the “courage and sacrifice of Kurdish warriors” in the fight against the so-called Islamic State (IS), adding that the meeting would not be possible without their efforts.

The Kurdish Peshmerga forces “helped win an important victory,” Perry stated, “because of them, people are free. With freedom comes security and more opportunity.”

“Today, we’re seeing increased stability and security across this entire region that gives us precious opportunity to think about building, to invest, to be partners,” he added.

The US Secretary of Energy did not reveal the details of the meeting but said his discussion with Iraqi and Kurdish officials “centered on developing and understanding.”

“The time has arrived for us to focus on building the economy and infrastructure,” he affirmed.

My final meeting in Iraq was with @masrour_barzani, Chancellor of Kurdistan Security Council, where we continued discussions on the importance of energy collaboration and the role that Kurdistan plays in an energy secure Iraq and eliminating the influence of Iran. 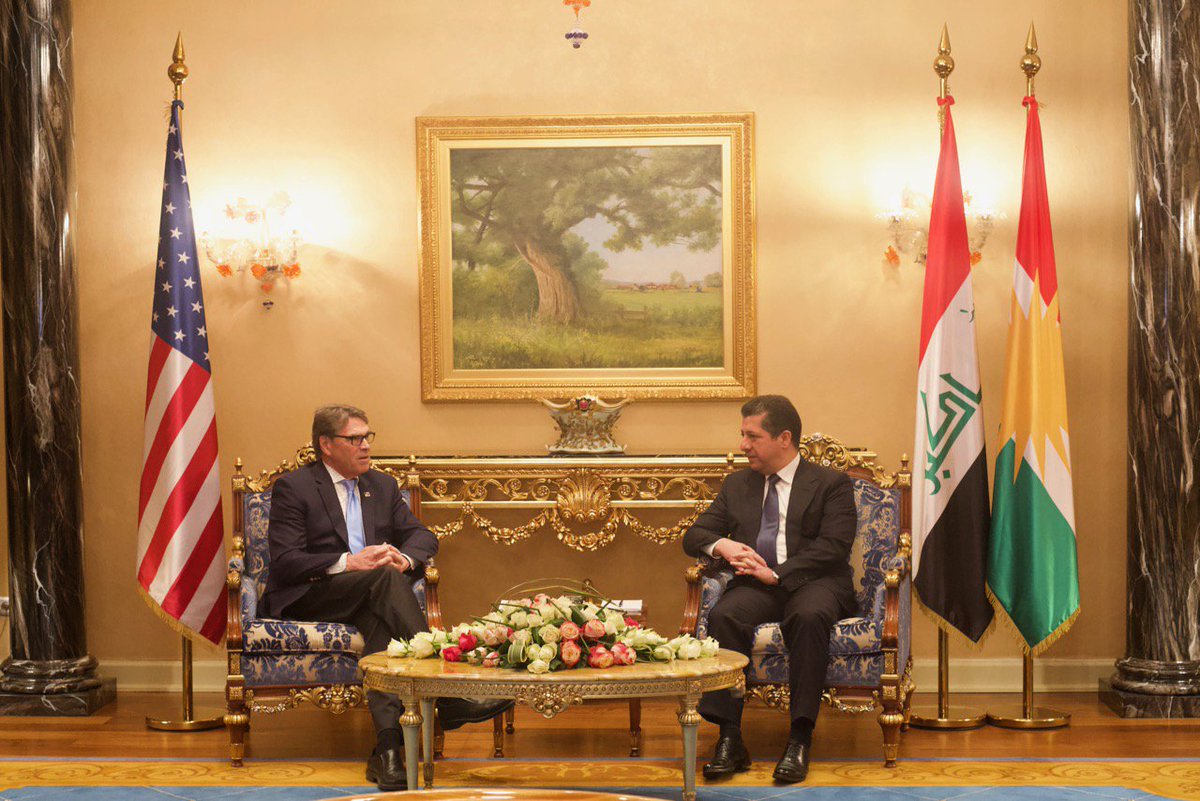 Baghdad: Iraq announced its position on the future of the Organization of Petroleum Exporting Countries (OPEC) after calls for the dissolution and the establishment of another organization.
“Iraq is one of the founders of OPEC, which aims to seek the interests of producing countries and achieve balance in the global oil market, which is in need of solidarity to stabilize global markets and achieve the goals of producers and consumers alike,” said Asim Jihad.
“Iraq has played a major role over the past decades in the development of the Organization of the Petroleum Exporting Countries by bringing the views of the members closer, despite the political and economic challenges surrounding the global market,” he said.
“Today, the producers need solidarity and unite more to meet the challenges of the market and prices, and what happened in 2016 in the reduction of production was a historic agreement between the producing countries inside and outside OPEC, especially Russia to face the decline in oil prices and the economic crisis.”
He pointed out that “this solidarity was the first of its kind and helped raise the price of oil and revitalize it from $ 40 to more than $ 70,” stressing that “the unity of producers maintain the stability of oil prices, the multiple organizations and visions will cause great concern in the oil market and contrast In views, leading to its turmoil. ”
“There are technical effects related to supply and demand, the availability of crude oil and geopolitical effects, which have become a factor in the turmoil of the markets, and efforts should remain based on the unification of OPEC more,” he said.
Commenting on Qatar’s decision to withdraw from the OPEC, a spokesman for the Iraqi Oil Ministry, “a political position has been explained by the Qatari oil minister that his country is a producer of gas more than oil and thus respect the sovereign position,” noting that “the quantities of oil production of Qatar is not affecting the global oil market” .
Jihad stressed that “we need more OPEC’s unit, and not for its decisions in the agreement in 2016 to collapse prices to large levels and this indicates the need for more solidarity and solidarity, both producers from within the OPEC or outside it and we have to join other members to unite visions to stabilize prices.” is over
http://alforatnews.com/modules/news/article.php?storytopic=37&storyid=182366

(Baghdad: al-Furat News) President of the House of Representatives Mohamed Halboussi, on Thursday, Prime Minister Adel Abdul-Mahdi, the political developments in the country, and mechanisms to accelerate the resolution of the file of vacant ministries and the completion of the government cab.
A statement issued by the Office of the Speaker of the Parliament received the agency {Euphrates News} a copy of it. “The meeting also discussed the file of the federal budget and the acceleration of public adoption, taking into account the ratios of ministries and provinces in a manner that takes into account the specificity of each province; to promote the reality of services in a manner that ensures the achievement of the government curriculum and meet the requirements of the Iraqi people.
“The readiness of the House of Representatives to support the executive branch to complete what is required by the next phase.”
http://alforatnews.com/modules/news/article.php?storytopic=36&storyid=182361